An award for breaking a campaign promise. 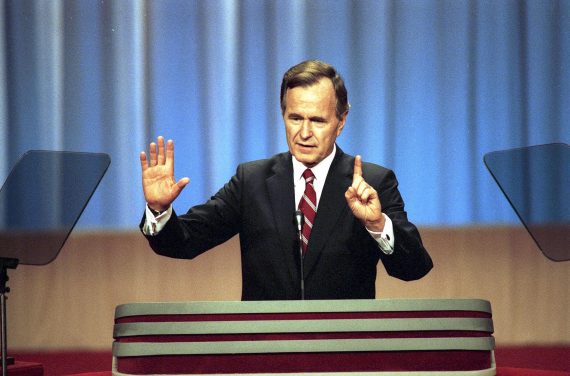 Former President George H.W Bush received the annual Profile In Courage Award from the John F. Kennedy Library Foundation for his 1991 decision to go back on his famous “Read My Lips” promise made at the Republican National Convention in 1988 to not raise taxes during his Presidency:

The organization honored the 41st U.S. president with its 2014 Profile in Courage Award, praising the Republican leader’s “decision to put country above party and political prospects” in the deal with congressional Democrats.

“America’s gain was President Bush’s loss,” Jack Schlossberg, grandson of former president John F. Kennedy and a member of the award committee, said during a ceremony at the library in Boston.when

“Candidly speaking, my grandfather did not want to raise taxes in 1990,” she said. “But in our constitutional system of governance, Congress also gets a say – and more than that, he felt he owed the American people action and results.”

To a large degree, Bush’s tax promise was motivated by the perception that had developed leading up to the 1988 Presidential race that he was, somehow, a “wimp” and that he wouldn’t be able to stand up to Congressional Democrats in the manner that Ronald Reagan did during his Presidency. In that sense, the promise was made more to the conservatives in the Republican Party who had doubts about Bush that dated back to his first run for the Presidency in 1980 than it was to the American people. Additionally, it was, quite obviously, a political tool that the Bush `88 campaign used in the General Election. In all honesty, given the state of the economy and the popularity of the Reagan Administration at the time, Mike Dukakis never really had a serious chance to win the White House in 1988. But, Lee Atwater being the kind of campaign manger that he was, nothing was left to chance, and the “no new taxes” pledge was most definitely part of the effort to tag Dukakis as part of the left wing of the Democratic Party in the tradition of Walter Mondale who, of course, had been soundly defeated just four years earlier.

The actual circumstances of Bush breaking the pledge are very clear. In the midst of a budget showdown in 1990, the President entered into tense negotiations with the Democratic leadership of the House and Senate in an effort to reach a deal and avert a government shutdown. In the end, Bush agreed to a deal that included what amounted to relatively modest tax increases in retrospect, and indeed increases that were smaller than those that Ronald Reagan had agreed to back in 1982. But, of course, Bush was not Reagan, and Reagan had not made a promise that he would never raise taxes. The reaction to the deal on the right to the deal was predictable, and it led to the Pat Buchanan primary challenge in 1992, the tepid support that Bush received from the right that year, and the general push of the Republican Party to the right that manifested itself most clearly in the rise of Newt Gingrich and the Republican takeover of Congress in 1994. Indeed, to this day the senior Bush’s actions regarding taxes remain among the litany of charges that conservatives level against the Bush family, although that list somehow always seems to exclude George W. Bush’s “War On Terror” policies.

In many respects, this award is yet another part of the reassessment of George H.W. Bush’s Presidency that has occurred over the past decade or so. In many respects, Bush is now a far better regarded public figure than he was when he left office in January 1993. In no small part, of course, this is due to the passage of time, the fact that Bush hasn’t been President for 21 years, and a general feeling of nostalgia that Americans seem to develop for retired politicians, or at least some of them. Bush’s friendship and partnership with Bill Clinton, the man who defeated him in 1992, has obviously gone a long way toward reshaping public opinion about the first President Bush. Also, his retirement into the role of father and grandfather who has largely stayed out of the public fray of politics has helped in that regard, something that differentiates himself from, say, Jimmy Carter.

Perhaps most of all, though, one of things that has led to a reassessment of the Bush 41 Presidency, especially on my part, was the manner in which it hearkens back to an era when Washington actually seemed to work. In the end, rather than being the “no new taxes” ideologue who spoke at the Republican Convention in New Orleans, George H.W. Bush ended up being a statesmen who made the best deal that he could to get a budget crisis resolved. It was messy and contentious, and there were harsh words exchanged, but in the end the deal was done. That’s how government is supposed to work, but it’s not how government has been working in this country for the past half decade or so. The difference is that Bush 41 didn’t have to deal with the talk radio and online chattering classes, and he didn’t have to deal with a Republican Party that didn’t seem to understand what governing means.

I was not a fan of Bush’s when he was President. Heck, I didn’t even vote for him in 1988 (I didn’t vote for Dukakis either). And the tax increase kind of annoyed me at the time even though, as a first year law student there was no chance at all I would be affected by it unless I won the lottery. In retrospect, I’ve got to say that while Bush wasn’t a perfect President by any means, I think I was wrong in my initial asssement of him at the time. And, he deserves this award.