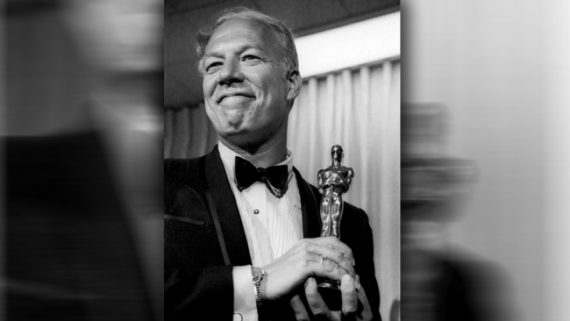 George Kennedy, a versatile character actor who played in some of the best-known films of the 1960s and 1970s, has died at the age of 91:

George Kennedy, who played tough guys, oafs, G.I.’s and a bonanza of cowboys as one of Hollywood’s most versatile and durable character actors, and who won an Oscar as the best supporting actor of 1967 for his performance in the Paul Newman film “Cool Hand Luke,” died on Sunday in Boise, Idaho. He was 91.

His death was confirmed by his grandson Cory Schenkel.

Vicious killers, bumbling lawmen, saddle tramps, bank robbers, scowling bullies — anybody you’d be foolish to mess with or trust in an emergency — Mr. Kennedy portrayed them all in more than 200 films and television productions in an acting career that spanned nearly five decades.

No critic ever spoke of a George Kennedy oeuvre. Many of his films were hokey, with absurd plots and over-the-top acting. And, with the exception of his Academy Award performance and his work in about a dozen other films, he was most often a peripheral player, a sidekick of the star or the straight man with setup lines for the comedian.

But from the early 1960s on, hardly a year went by without a Kennedy picture — often there were four or five a year — and he was memorable as the heavy in “Charade” (1963), with Audrey Hepburn and Cary Grant; as Maj. Max Armbruster on a World War II mission in “The Dirty Dozen” (1967); as a regular in the “Airport” pictures, and later as Leslie Nielsen’s dumbstruck captain in the “Naked Gun” comedies.

He was perhaps best known for his role in “Cool Hand Luke”: Dragline, a chain-gang prisoner whose brutality and compassion as the gang leader not only revealed Mr. Kennedy’s rarely seen range as an actor, but also deftly illuminated the character of his tormented fellow convict, played by Mr. Newman.

Besides winning the Academy Award, Mr. Kennedy’s performance won wide critical acclaim. “George Kennedy is powerfully obsessive as the top dog who handles things his way as effectively and finally as destructively as does the warden or the guards,” Bosley Crowther wrote in The New York Times.

Mr. Kennedy typically helped to make other stars look good, and he worked with a pantheon of them: Bette Davis, James Stewart, Burt Lancaster, Charlton Heston, John Wayne, Clint Eastwood and many more.

Occasionally Mr. Kennedy headlined the cast of a B-movie, like “The Human Factor,” a 1975 vigilante-justice film, in which he wiped out terrorists who killed his family. He also starred in two television series: He was a cop turned priest in “Sarge,” seen on NBC in the early 1970s, and a patrolman in “The Blue Knight,” on CBS in 1975-76.

But his stock in trade was the supporting role, and his rugged but bland looks were right for almost any part. He was tall and burly, with a bull neck, eyes that widened with shock or narrowed to menacing slits, a disingenuous smile and big ham hands to grip the gun or slap the girl. In the mold of Lee Marvin or Lee Van Cleef, he was a first-rate thug, and his deadpan look was perfect for disaster pictures or comedies.

In 1970 he played the improbable rescuer, Joe Patroni, in “Airport,” a soapy melodrama with an all-star cast about a bomber on a plane, an airport socked in by a blizzard and desperation aloft and on the ground. He reprised his role in the sequels, “Airport ’75,” “Airport ’77” and “The Concorde … Airport ’79.” He was the only cast member to appear in all four.

George Harris Kennedy Jr. was born in New York City on Feb. 18, 1925, the son of George and Helen Kennedy. His father, a musician and bandleader, died when he was 4, and he was raised by his mother, a ballet dancer. His parents put him on the stage at 2, and he later worked in radio. But his entertainment career got off to a late start.

A military career seemed more likely. After graduating from W. C. Mepham High School in Bellmore, N.Y., he joined the Army, fought in the infantry in Europe in World War II and spent 16 years in the service.

He opened the Army’s first office of technical assistance for films and television, and in the late 1950s retired and became an adviser to “The Phil Silvers Show.” Soon he was speaking lines on that program, and by the early 1960s he was playing roles on shows like “Maverick,” “Peter Gunn” and “Route 66.” From 1988 to 1991 he was on the prime-time CBS soap opera “Dallas,” playing Carter McKay, a rival of the Ewing brothers.

He made occasional appearances in films and television shows in recent years. In 2014 he was in the film “The Gambler,” starring Mark Wahlberg and Jessica Lange. He published a memoir, “Trust Me,” in 2011.

Given the large number of films that Kennedy was in, it’s not uncommon to see him pop up in a movie from his era that you just happen to be watching, and while it was true that he often played a very familiar “tough guy” character he did so in a way that brought something new to the role each time. His performance in ‘Cool Hand Luke,’ though, was clearly his best and his Academy Award well-deserved and a fitting example of why the award for actors in supporting roles is a worthy one. Without it, actors such as Kennedy would be easily overshadowed by the star actor they share the screen with when it’s clear that they’re worthy of recognition all their own.