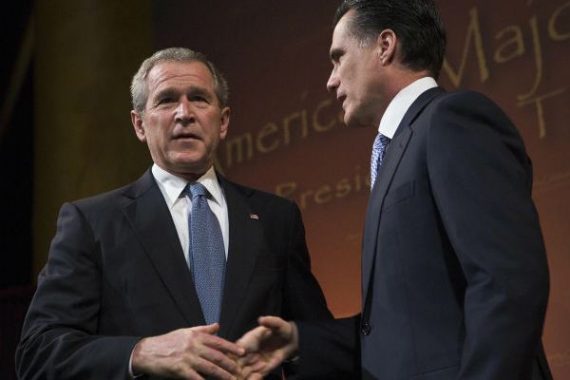 For all the talk about whether Mitt Romney should distance himself from George W. Bush -and the policies of the last GOP White House — a new survey showsthat the former president actually has better favorability ratings than the Republican nominee.

The survey shows first and foremost that Romney is struggling in his effort to unseat President Barack Obama — a fact highlighted by several other polls conducted ahead of the first presidential debate next Wednesday.

But it also shows how Bush — following the trend of other former presidents — has seen his popularity improve since leaving the White House, when his favorable numbers in some surveys hovered around the mid-30s.

Partly, this is a reflection of the fact that Bush is getting the benefit of the same “absence makes the heart grow fonder” effect we see with the popularity of former Presidents. The longer they are out of the public eye, the more the public tends to have a slightly different view of a former President, even one who left office with historically low popularity ratings like Bush did in 2009. Combine that with the fact that, unlike Romney, Bush isn’t constantly in the public eye. Still, it also says a lot about Romney’s likability problem.