Getting Back to ‘Normal’

With masks off, political leaders are urging people to get out there and spend money.

Just a few days into a changed set of CDC protocols recommending that 90 percent of Americans no longer need to wear masks to protect against COVID-19 infection, our society is still coming to terms with the idea of returning to a pre-pandemic “normal” and what that might look like.

Politicians who had once been at the forefront of urging vaccination and masking to promote the public health have suddenly veered to the need to get the economy going again. President Biden emphasized this in his State of the Union address last week:

Last year, Covid-19 kept us apart. This year, we are finally together again.

For more than two years, Covid has impacted every decision in our lives and the life of this nation.

And I know you’re tired, frustrated and exhausted. That doesn’t even count the close to a million people who sit at a dining room table or a kitchen table looking at an empty chair because they lost somebody.

But I also know this.

Because of the progress we’ve made, because of your resilience and the tools that we have been provided by this Congress, tonight I can say we are moving forward safely, back to more normal routines.

We can end the shutdown of schools and businesses. We have the tools we need.

It’s time for America to get back to work and fill our great downtowns again with people. People working from home can feel safe and begin to return to their offices.

We’re doing that here in the federal government. The vast majority of federal workers will once again work in person.

Our schools are open. Let’s keep it that way. Our kids need to be in school.

NYC mayor Eric Adams has been even more adamant:

For the past several weeks, mayor Eric Adams has been exhorting businesses to get their employees back in the office, first making an appeal to conscience and then to cultural personality. Without a steady flow of commercial traffic, delis, restaurants, dry cleaners and all the remaining places that mix poke bowls while you wait on line will disappear, he has argued, endangering the livelihoods of hourly wage workers.

When that wasn’t quite working, he tried a new approach, in a recent speech in the Brooklyn Navy Yard, sounding like a fed-up parent unable to rouse a lazy teenager from under his comforter. The mayor wanted all New Yorkers who have continued to confront the world largely by way of screens and homemade lunch eaten at a kitchen table to know that they needed to be “out” and “cross-pollinating.” It was no longer an option to “stay home in your pajamas all day,” as he put it, because, “that’s not who we are as a city.”

Being a service economy, as the United States has been for more than half a century, depends very much on such cross-pollination. People working from home aren’t buying new suits, stopping off for a morning coffee, eating lunches in restaurants, dropping off their dry cleaning, and otherwise putting money into the local economy to anywhere near the degree they would if they were at the office. While that’s likely a boon at an individual level—all of those things are things financial advisors say we should cut out to devote more to saving—it’s bad news for entrepreneurs and would-be workers in those venues.

For a variety of reasons, not everyone is ready to get back to “normal.” Most obviously, there are immunocompromised and otherwise more vulnerable populations for whom the pandemic doesn’t feel over. A CNN analysis shows only 7% of Americans live in counties with High levels but notes that the danger is not yet over:

“Rates of cases are not at a very low rate, but they are low enough and hospital capacity is good enough that it’s appropriate to roll back many of the restrictions. Looking right now at these figures, for spring and summer, there’s a lot of hope,” said Amber D’Souza, an epidemiologist with Johns Hopkins University. “This would not have looked this good two or three months ago in the middle of the surge.”

Deaths from Covid-19 have dropped 11% from last week, but the US is still averaging 1,554 new deaths each day, according to Johns Hopkins University. It’s much worse than a disease like the flu, the experts said.

“There are many people dying every day from coronavirus. It remains a very serious infectious disease. But we have made tremendous progress,” D’Souza said.

Even aside from risk tolerance, though, a lot of people have spent two years adjusting to a very different normal and are in no hurry to return to the old ways.

I gather from the commenters here that some actually enjoy wearing a mask, whether because it’s convenient not to have to fuss about their appearance or for the protection it provides from the common cold. And, rather clearly, the politicization of the virus by former President Trump and his ilk has made masking a badge of honor for some on the left: a visible symbol that they’re not one of them.

More importantly, though, a whole lot of workers have adjusted to a considerably more flexible work schedule and are in no hurry to go back to the old 9 to 5. Especially since schools have somehow not adjusted to the decades-long trend away from stay-at-home moms, it’s incredibly convenient to be able to flex around bus schedules and the like. And, certainly, not needing to wear a coat and tie to the office or endure rush hour traffic has its appeal.

One would imagine, too, that a lot of business owners and managers, having learned that employees can be just as efficient if not more so working remotely are happy to shed the need to maintain expensive commercial real estate to house their enterprises. And to foist off the cost of information technology to their employees.

With the exception of a masking requirement (which finally ended Thursday) my work has been impacted less than most by COVID, so a return “normal” is really a matter of taking off the mask. We went to remote instruction in mid-March 2020 and finished out the academic year that way. But we went back to essentially full-on in-person instruction that August and never looked back. Before vaccinations, those who themselves or had a household member in a high-risk category were allowed to stay remote but we’ve been essentially a fully-vaccinated workforce for almost a year now. We were even maskless for a few weeks starting May 13 before the requirement was reimposed July 28. So, for me, the only real change is once again being maskless.

Even in my non-work life, the main impact of the pandemic was the eerie few weeks from late February to late May of 2020 when non-essential businesses were closed. Once the phased reopening went into effect, we gradually returned to something pretty much like normal. Offhand, the only activity we used to engage in with some frequency that we haven’t resumed is watching movies in theaters rather than streaming them at home.

The Northern Virginia suburbs where I live is pretty blue and people were reasonably compliant with masking guidelines and are vaccinated at a higher rate than the country as a whole. Still, considerably fewer people were masking a month ago than a month before that. Oddly, the new CDC guidelines don’t seem to have changed much: I’d guess 60 percent of those at the local grocery stores are still masking. 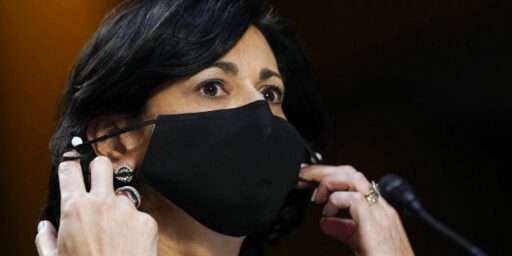