Newt Gingrich and Rick Santorum apparently talked about uniting to stop Romney during the 2012 Republican primaries. 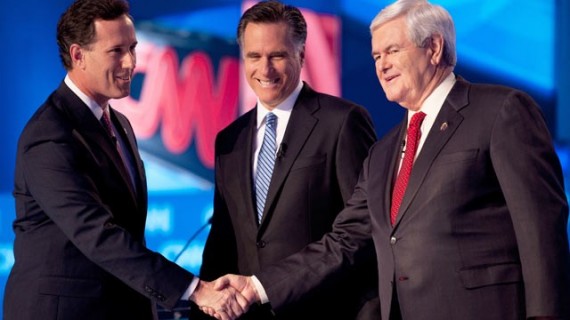 The discussions between the two camps commenced in early February, just after Gingrich got trounced in Florida. Brabender called members of the Gingrich brain trust, hoping they could persuade Gingrich to drop out and endorse Santorum, who was rising in the polls. “I’ll tell you this,” says Brabender, “If Gingrich had dropped out at the right time, Santorum would have been the nominee.” Brabender wasn’t short on moxie: He wanted Gingrich to declare in the middle of a nationally televised debate that he was dropping out and endorsing Santorum. “I couldn’t write an ad to match the political theater that would have created,” he says.

Gingrich had other ideas. He proposed that both men join forces but remain in the race, each concentrating on the states where he matched up best against Romney. Gingrich thought he could carry Georgia, Delaware, Washington, and Wisconsin (from which his wife, Callista, hails). Santorum would focus on other states in the South and the upper Midwest. But there was a catch. “The appeal of a Unity Ticket was strength in numbers,” says Kellyanne Conway, Gingrich’s pollster. “The big question was, who was going to unify with whom? Who was going to be the sheriff and who was going to be the deputy?”

Gingrich thought that he belonged on top of the ticket. “Our reasoning,” says Walker, “is that we had won a major primary at that point [South Carolina] and people like Rick Perry were coming on board. Perry had just endorsed Newt.”

To Santorum’s team, however, the Gingrich campaign was a sinking ship, and their own man was the obvious choice to lead the ticket. “At the end of the day,” says Brabender, “we won 11 states and tied two others. He won two states, which makes it only logical that Rick was the one who had earned the right to go one-on-one with Romney.”

In the end, of course, the idea fell apart because neither side could agree exactly what kind of alliance they should form. Gingrich, being Gingrich, thought that he belonged at the top of the ticket because he was the most senior figure. Santorum, on the other hand, seemed to see Gingrich as damaged goods to such an extent that focusing an anti-Romney campaign on him would have been doomed from the start. This outcome isn’t entirely surprising, really. Trying to get two politicians who both hold the belief that they are the best hope for the party in the 2012 elections (otherwise why would they be running) to agree to much of anything. Remember, Gingrich and Santorum were attacking each other last year as much as they were attacking Romney and the other candidates. The idea that they would have put that aside is simply laughable. Even if these two men had somehow agreed to a “unity ticket” of some kind, I doubt that it would have lasted very long had it had even a modicum of success. At some point, the natural ambitions of both of the candidates would have taken over and the alliance would have broken down.

What’s most amusing, though, is the idea that either of these men, and their advisers, ever thought that a “unity ticket” would have ever worked in the sense that it would have been able to stop Romney’s seemingly inevitable victory.  As I noted throughout the GOP race, Republicans seemed to be on a search for the “Anyone but Romney” candidate. Before the race even began, people on the right were nearly begging candidates like Mitch Daniels, Mike Huckabee, and Jeb Bush to step in because none of the declared candidates looked like they’d be able to beat the Romney juggernaut. This problem became apparent during the months before the debates started when Michele Bachmann of all people surged to the front of the polls even though nobody actually believed that she would be a viable candidate in the General Election. When Rick Perry entered the race, he quickly became a hero on the right and pushed Bachmann far back in the polls, a position from which she never recovered. When Perry fizzled out, Herman Cain got his chance in the spotlight but quickly fell back thanks both to the fact that his was a campaign without substance and because of his own personal scandals. Finally, as 2011 ended and the first votes got closer, Gingrich and Santorum both started rising in the polls. While both candidates would go on to score victories — Gingrich in South Carolina and Santorum in a number of caucus states in the Mid-West and elsewhere — neither one of them came anywhere close to being a real threat to Romney’s ultimately inevitable victory. What leads anyone to think that some kind of “unity ticket,” the logistics of which seem inherently unworkable, would have done any better?

The “unity ticket” gimmick would have received its share of media attention, but why would voters be more drawn to a ticket that included the flaws of both Santorum and Gingrich? The activists and pundits desperate to find an alternative to Romney might have cheered it on, but why would it change who the nominee turned out to be? If anything, the possibility that the GOP might end up with Gingrich and Santorum as their presidential ticket would have driven more Republicans towards Romney rather than lured them away from him.

And they would have been helped along by the Romney campaign and it’s supporting SuperPAC’s, both of which were very good about going negative against whichever candidate appeared to be a bigger threat to Romney. Throughout the campaign, both Santorum and Gingrich consistently had higher negative poll numbers than Romney ever did, and Romney would have exploited that advantage quite well. As Larison notes in his piece, if the right had wanted to find a candidate to “stop Romney,” the time to do that was well before the voting had started, preferably early in 2011 or 2010. As it was, they were left with the field they had, and with that field, the idea that a disgraced former Speaker and a former Senator who couldn’t even get re-elected in his home state could have stopped Romney is utterly absurd.