It's been 441 days since Donald Trump held a full-fledged Presidential press conference. Does anyone care? 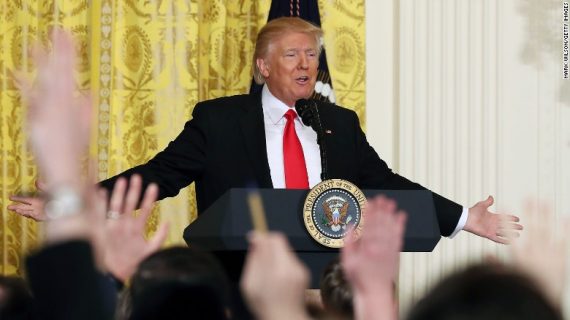 The last time that President Trump held a full-fledged press conference was 441 days ago, just 28 days into his Presidency. Not surprisingly, it made headlines that lasted for days, but not for reasons that were generally favorable to the Administration. Since then, Trump has made himself available to the press only in tightly controlled situations, choosing instead to address the public directly via his Twitter feed and the campaign-style rallies that he has continued to hold even after winning the 2016 election. On several occasions, reporters have asked when we might see another press conference only to be rebuffed by the White House. This has led many to conclude that we may be witnessing the death of the Presidential press conference:

The presidential news conference, a time-honored tradition going back generations, appears to be no longer.

More than a year has passed since President Donald Trump held the only solo news conference of his administration — a rollicking, hastily arranged, 77-minute free-for-all during which he railed against the media, defended his fired national security adviser and insisted nobody who advised his campaign had had contacts with Russia.

But there are no signs the White House press shop is interested in a second go-round. Instead, the president engages the press in more informal settings that aides say offer reporters far more access, more often, than past administrations.

But the format also gives the president far more control than he would have during a traditional question-and-answer session. Trump can easily ignore questions he doesn’t like and dodge follow-ups in a way that would be glaring in a traditional news conference.

On Friday, for instance, Trump answered several questions in the Oval Office about North Korea and Iran. But when a reporter asked about his threats regarding intervening in the Justice Department, Trump responded with a curt “thank you” that signaled to reporters that he was done with the Q&A session.

The president also holds joint news conferences with visiting world leaders, a format reporters call “two and two” because each leader selects two of its country’s reporters to ask questions. While the format looks similar to a solo news conference, the president more often than not calls on friendly reporters from conservative outlets and limits the opportunity for follow-up questions.

On Friday, during a joint news conference with German Chancellor Angela Merkel, Trump called on reporters from Fox Business Network and the Christian Broadcasting Network. Fox News correspondent John Roberts has been called on so often that Trump once picked him and then changed his mind. “Actually, we’ll go somebody else this time, John. You’ve been doing enough, John,” he said to laughs.

Trump also submits to occasional one-on-one interviews with individual news outlets. Last week, he called in to “Fox & Friends,” his favored format during the campaign. And several times he has held longer, impromptu question-and-answer sessions, including one in the Rose Garden with Senate Majority Leader Mitch McConnell that, for reporters, had the feel of a mosh pit.

Margaret Talev, a longtime White House reporter and president of the White House Correspondents Association, said the association welcomes Trump’s “openness to engage on a regular basis, in pool sprays in the Oval Office and less traditional settings such as South Lawn departures.”

But, she said, “We have been disappointed at his reluctance to engage in regular full-format news conferences and we will continue to encourage him and his team to return to the practice. Such news conferences help the public to gain a deeper understanding of a president’s thinking on an issue; show transparency and accountability; allow journalists to raise questions the public may be concerned about; and also allow a president to shape his message.”

Indeed, during his campaign, Trump often criticized his rival, Democrat Hillary Clinton, for failing to engage more with the press.

“Crooked Hillary Clinton has not held a news conference in more than 7 months. Her record is so bad she is unable to answer tough questions!” he tweeted in June 2016.

Trump’s lack of press conferences is certainly a break with past Presidents. Barack Obama, for example, held seven full-fledged press conferences during his first year in office, while George W. Bush held four. President Clinton held eleven press conferences during his first year in office, Ronald Reagan held six, Richard Nixon also held six, and even Gerald Ford held four such press conferences. The two leaders of the pack are Jimmy Carter, who held twenty-two press conferences during his first year in office and George H.W. Bush, who held twenty-seven such conferences. (Source) Several of these Presidents became less generous with their time as their Presidencies went on, but the point nonetheless remains that Donald Trump is lagging far behind his predecessors when it comes to freely making themselves available to the press. Additionally, since the Obama years Presidents have also looked for ways to get their message beyond the White House Press Corps. For Obama, that consisted of granting frequent interviews with local media in key states throughout the country. This was a strategy that the Obama White House used quite effectively, for example, in the run-up to the 2012 Presidential election. As a general rule, though, these Presidents largely continued the practice of being rather generous with the Presidents time when it came to press access.

Under the Trump Administration, that practice seems to be coming to an end. Not only have we seen the apparent end of the Presidential press conference, but there have been substantial changes to the White House Daily Press Briefing. For a significant amount of time last year, for example, the press office declined to hold full on-camera briefings and instead opted for off-camera “gaggles” or even skipped any briefings altogether for days in a row. That has changed somewhat since Sarah Huckabee Sanders became Press Secretary last summer, but it’s still the case that the briefings that Sanders gives are substantially shorter than those that previous White House Press Secretaries and she often makes it difficult for journalists from mainstream press organizations to ask question by making the briefings even shorter due to opening statements from Cabinet officials about some initiative or another or by calling on reporters from more obscure press organizations. While there’s nothing per se wrong with the second practice, and the White House is arguably to be complimented for opening up access to the Press Corps, dodging questions from reporters who have hard questions to ask is hardly an example of transparency.

At this rate, it’s not clear when, or if, Trump will ever hold another full-fledged press conference but I’m willing to bet we’ll be back here in 365 days without Trump having held such a meeting with the press.