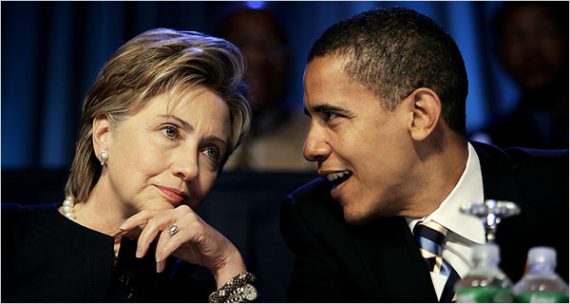 It makes sense for the Democrats, actually. Clinton has done an incredible job as secretary of state. First of all, she has worked harder than anyone should ever be expected to. She has managed to do the impossible: She is the ambassador of the United States to the world, maintaining her credibility while playing the bad guy to President Obama’s good guy, such as with North Korea, Iran and Israel, and still looking good. She has been a true team player. If Clinton is dissatisfied with her role, you would never know it. She has been loyal and supportive to the president and has maintained a good relationship with him and with others in the White House. If she is being left out of the policymaking, or being sent on trips to keep her out of town, she has not shown it. She is cheerful, thoughtful, serious and diligent. There are no horror stories about her coming out of the State Department. Most notable, though, is that Bill Clinton has not been the problem that so many anticipated. He has been supportive of her and of Obama, and he has stayed out of the limelight and been discreet about his own life.

In short, the arguments against Hillary Clinton being Obama’s vice president have pretty much evaporated.

On this last point, I think that Quinn is largely correct. During the run-up to the 2008 Democratic Convention, there was much speculation about whether or not Obama would select Hillary as his running mate. There was some Clinton supporters, in fact, who felt that she was at least owed an invitation to be on the ticket given how close the race for the Democratic nomination had been, and some political analysts seemed to think that Obama needed to pick Clinton to bolster his own resume and shore up the Democratic base. As John Heilemann and Mark Halperin revealed in their excellent book Game Change

, though, it was Hillary herself who largely put an end to that speculation, admitting in private that her husband was too much of a loose cannon for her to be good for the ticket in 2008.

Has that really changed ?

In some ways, I would say yes. To a large degree, it seems clear that Bill Clinton has redeemed himself from his disastrous performance during the South Carolina primary and his personal approval numbers are as high as they’ve ever been since he left office. More importantly, though, Hillary’s tenure at Foggy Bottom has given her much more of an opportunity to separate her image from Bill’s than she ever had before. To the extent that Bill Clinton was the barrier to Hillary becoming Vice-President in 2008, I would say that’s no longer an issue.

The other barrier to putting Hillary on the ticket in 2008 that some mentioned back in 2008 was the remaining personal animosity that allegedly existed between her and Obama after what was undoubtedly one of the most intense primary campaigns in recent memory. At least in public, that animosity seems to have disappeared and Hillary has been a loyal Secretary of State.

Quinn raises another argument in favor of putting Hillary in the No. 2 spot:

Clinton is also young enough to be the Democratic nominee at the end of an Obama second term; she will be in her late 60s in 2016 but still younger than Ronald Reagan was when he was inaugurated in 1981 (just shy of 70) and younger than John McCain, who was 72 when he ran in 2008. Most important, were she vice president and Obama were for some reason not able to fulfill his term, she would be ready to step in.

Biden, on the other hand, will be 74 when 2016 rolls around and, while he reportedly said last year that a run for President then is not out of the question, it is extremely unlikely that he’d be the nominee.

Republicans faced a similar issue in the run-up to the 2004 elections. There some who believed that Dick Cheney should step aside that year and allow President Bush to select another, younger, running mate who could become the GOP standard bearer in 2008. As it turned out, of course, the last four years of the Bush Administration were disastrous enough that it’s unlikely that his Vice-President would have had much of an advantage in the race for the GOP nomination, to say nothing of the General Election.

Of course, there’s no indication that Obama would even consider asking Biden to step aside in 2012, just as there was no evidence that Bush would have ever asked Cheney to do the same. If he did, though, and assuming that an Obama/Clinton ticket managed to win re-election in 2012, it could set up a very interesting election in 2016.

Quinn’s column is largely a Hillary Clinton lovefest, but she raises an interesting possibility.