In regards the current internecine Democratic fight over the health care compromise, Megan McArdle argues that many people are simply naive about as to how the negotiation process operates:

This bill is, at this point, hideously unpopular.  I’m pretty sure you’ve got a bunch of senators who would really, really love not to vote for it.  Ultimately, the moderates had a very good alternative to negotiated agreement, and the progressives didn’t, and that was crystal clear from Day 1.  That meant the progressives were never, ever going to get very much.  This was not a failure of political will or political skill.  It was the manifestation of a political reality that has long been obvious to everyone who wasn’t living in a fantasy world.  If progressives decide that the lesson from this is that they haven’t been sufficiently demanding and intransigent, they are going to find themselves about as popular with the rest of America as the Bush Republicans, and probably lose their party the House next year.

While I wouldn’t go quite that far — it’s going to take a lot of lost seats for that to happen — she’s certainly right that a lot of people on both extremes have an outsized view of how large their coalition is.   There’s a growing sense that we need to “do something” to fix our health care mess, there’s very little consensus on what, exactly, we should do.  Which means that the old saw about negotiations — that you have to be willing to walk away — likely won’t have the intended effect — because the other parties aren’t particularly anxious to strike a deal. 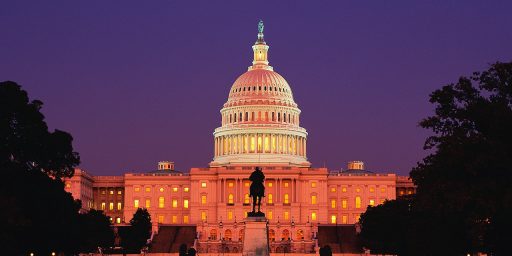 Debt Talks Break Down As Both Parties Go Separate Ways