President Obama wants a million hybrid cars on the road by 2015. That's easier said than done.

One of the regular themes of the old OTB Radio program* was that a major obstacle to hybrid vehicles dominating the market was that we couldn’t make enough batteries. President Obama apparently wasn’t a listener (it’s understandable; he’s a busy man). Among the pie-in-the-sky programs rattled off during January’s State of the Union was a goal of a million of these cars on the road by 2015.

While the target is, coincidentally I’m sure, happily after Obama’s political fate is sealed, the goal is highly unlikely absent either radical changes in technology overnight or an increase in the supply of the necessary rare earth elements.

Lee Allison, state geologist and Director of the Arizona Geological Survey, provides this handy chart of what goes into the Toyota Prius: 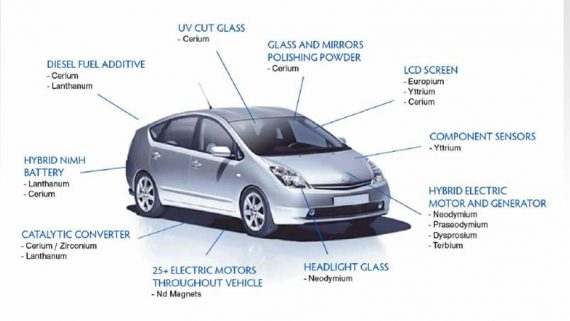 The problem is threefold: The demand is high, the supply is limited, and the major supplier is China–with Russia and Brazil controlling most of the rest. Oh, and China is moving to keep more of its supply at home.

The overall EMM market isn’t huge, but it’s large enough to leave room for other suppliers. At this time, China supplies more than 98% of that market. Fluorspar is used in acids and fluorine-based chemicals, so a lot of chemical companies need it, as do steel and aluminum manufacturers. Fluorspar is more than 50% supplied by China.

Graphite’s another mineral that’s also controlled largely by China. There used to be a fair number of producers in North America and Europe, but most of them shut down over the last 10 years as China outpriced them in the market. Graphite is a refractory used primarily in nuclear reactors and batteries. Actually, there’s more graphite than lithium in lithium-ion batteries.

Tungsten is somewhat underappreciated for what it does. It’s widely used in tooling, in the mining industry—even in products, such as the Blackberry. Those little vibration elements used in the Blackberry are made of tungsten. China currently produces in excess of 80% of the global supply of tungsten with a handful of minor suppliers in Canada and Russia sharing the rest.

Of course, China also dominates the supply of rare earths, which are pretty mainstream because even though it’s a very tiny market, REEs are very critical elements. There are lots of investment options there—almost too many.

As to the recent attempts by China to curb REE exports, Powell notes “we have a somewhat unreliable supplier—one that may at any time just use it internally to satisfy its own demand.”

Tudor Van Hampton of the NYT Wheels blog argues that we should bypass some of these problems by looking for alternative technologies.

One such technology, called switched reluctance, might offer a viable alternative. It uses a steel rotor that spins freely inside a housing of wires. Controlled by complex algorithms and solid-state switchgear, the motor can turn at variable speeds and at high torque levels.

“Essentially, you can get the same type of performance without needing to use rare-earth magnets,” said Scott Nieberle, a vice president at Nidec Motor Corporation, a switched-reluctance motor manufacturer based in St. Louis.

Amusingly, while Nidec Motor is “based in St. Louis,” its parent, Nidec Corporation, is Japanese and owns most of the related patents. Regardless, the technology, which has been in use going on three decades, hasn’t yet been adapted for automotive use. So, we’re going to be dependent on REEs for the foreseeable future.

While the Russians and Brazilians are catching up, American companies are just getting into the game. As Daniel McGroarty notes at the American Resources Policy Network,

Right now, China provides 97 percent of global Rare Earths production.  The U.S. provides a fraction of one percent.  But shift to known reserves – the potential to provide future supply – and the numbers tell a different story:  China has 36 percent of known reserves, with the U.S. accounting for 13 to 15 percent.

With China keeping more and more of its Rare Earth elements off of the world market, how does the Administration expect the automotive industry to reach its goal in four years without exploring the resources available to us in America?

Curious as to how the Administration is hampering exploration, I reached out to McGroarty, who explained via email,

The annual Behre Dolbear Report rates the U.S. last (of all 25 countries assessed) in terms of length of the permitting process, which typically runs 7 to 10 years or more.  In contrast, Industrialized nations like Australia review and permit new mining projects in 1 to 2 years — and do so without abandoning environmental and safety standards.  It’s time U.S. policymakers assessed the impact of the permitting process — at all levels of government — with the goal of removing unnecessary obstacles to resource development.  Market signals are encouraging U.S. development, and capital will flow to worthy projects.  The last piece is to align policy in a way that promotes responsible domestic development and decreases unnecessary foreign dependency.

The report, “2011 Ranking of Countries for Mining Investment,” is available in PDF form here. It’s worth noting that the United States is ranked among the highest countries in terms of the economic and political systems and have the highest possible rating (along with only Canada and Australia) for least corruption; we remain a great place to invest because of stability, the rule of law, ease of movement, and so forth. But, as McGroarty notes, we are awful in terms of permitting delays–and not just compared to authoritarian states that don’t care about the environment. Indeed, Australia is the highest-rated country in this category.

Most countries have environmental regulations equal, at a minimum, to the standards established by TheWorld Bank Group. The issue addressed here is not the strength of the regulations but the timeframeinvolved in obtaining permits. Contributing to delays are intervention by NGOs opposed to miningdevelopment; groups with legitimate concerns about the effect a project will have on their community orlifestyle; and, often, corruption on the part of bureaucrats in poorer countries.

Permitting delays are now a global issue. With the internet everywhere, issues at operations in onecountry become the concerns and examples to be used against a completely unrelated mining projectelsewhere. As this situation continues to evolve, the business environment will likely favor firms that aggressively take a proactive stance concerning societal and environmental issues. This will not guarantee success though, as corruption and other factors could still scuttle otherwise viable projects.

Permitting delays in the United States are the most significant risk to mining projects. A few miningfriendly states (Nevada, Utah, Kentucky, West Virginia, and Arizona) are an exception to this rule but arenegatively impacted by federal rules that they are bound to enforce. The United States is ranked lowest, ata 1 due to the average 7- to 10-year period required before mine development can begin.

In terms of Behre Dolbear’s overall rankings, the United States does quite well, ranking 6th overall with 41 points out of 70. But Australia (57), Canada (52), and Chile (51) are well ahead of us and  Brazil (45) and Mexico (44) are above us, too.  Matching Australia on permitting speed would catapult us the the top tier with 49 points. And matching Canada on taxes would put us at second place with 53.  Getting to the top spot would require addressing myriad things Behre Dolbear lump together as “social issues,” which refers mostly to environmentalism and general attitudinal factors towards mining that are not easily solvable. Indeed, the United States gets a double hit in this regard, in that these “social issues” doubtless explain most of the permitting delays.

It’s unlikely we can catch up to the Chinese, who not only have a substantial head start but an autocratic regime that completely prioritizes extraction over long-term environmental concerns. That’s neither politically possible here nor, frankly, something we want to emulate. We don’t want to compete in a race to the bottom. But I’m completely comfortable competing with the likes of Australia and Canada on an even regulatory and taxation footing.

_______________
*We went into hiatus after BlogTalkRadio changed their business model to a pay-to-podcast format and my search for a viable alternative ended without success.