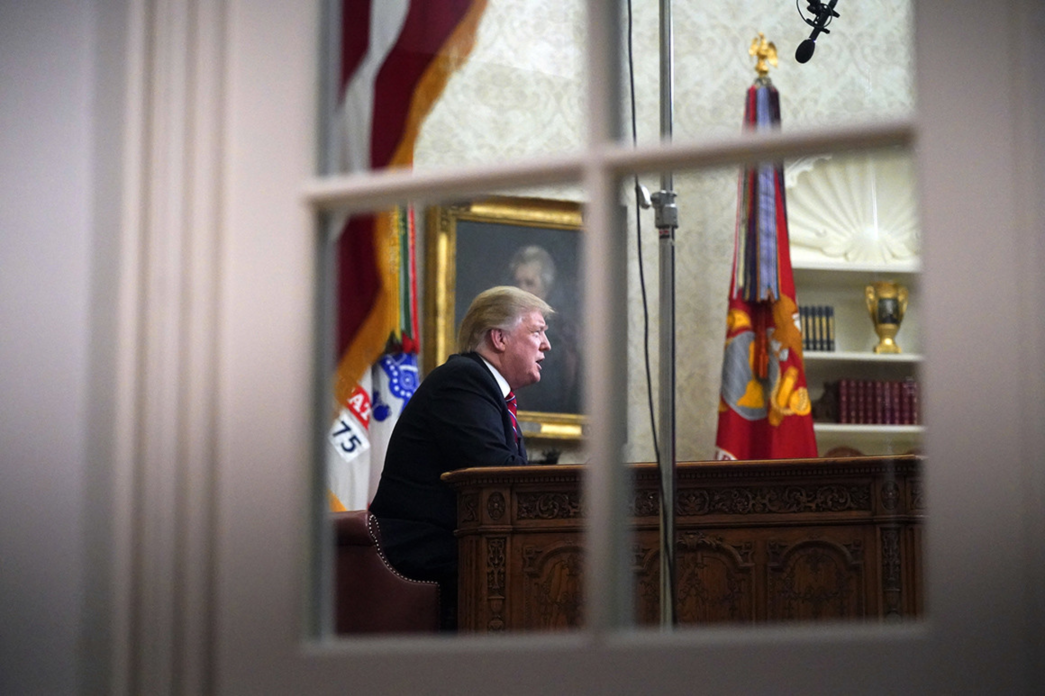 Daniel Dale, Washington Bureau Chief, Toronto Star (“Trump issues warning to opponents: ‘It would be very bad’ if his military, police and biker supporters got ‘tough’“):

U.S. President Donald Trump has warned his political opponents of the possibility that they could eventually be confronted by armed Trump supporters in and out of uniform, telling a right-wing website on Monday that “it would be very bad, very bad” if his backers in the military, police and a motorcycle group were provoked into getting “tough.”

Trump uttered the remark in an interview with Breitbart News, a right-wing website that supports him. It came, according to Breitbart, as Trump was arguing that “the left” plays politics in a “tougher” and more “vicious” manner than the pro-Trump right even though “the tough people” are on Trump’s side.

That’s the entirety of Dale’s report unless perhaps more is available to subscribers. While the President’s quote is making the rounds of my Twitter feed, it hasn’t hit the front of the WaPo or NYT websites as of this writing.

President Donald Trump is not happy that former House Speaker Paul Ryan blocked subpoenas of people and entities Trump thinks the House GOP should have been investigating during the first two years of his administration.

Trump told Breitbart News in an exclusive lengthy Oval Office interview that Ryan blocked issuance of subpoenas to people he thinks should have been investigated on the political left, and now that the Republicans no longer have the majority in the House, people Trump says Ryan protected may have gotten away with whatever they did that warranted investigation.

Trump said that House Freedom Caucus Chairman Rep. Mark Meadows (R-NC) and his predecessor and fellow conservative Rep. Jim Jordan (R-OH) wanted to be tougher with the left, but that Ryan would not let them.

“Paul Ryan wouldn’t give the right to have any subpoenas,” Trump told Breitbart News. “Okay? Now in all fairness, Meadows and Jordan and all these guys, they wanted to go tougher, but they weren’t allowed to by leadership.”

Trump’s comments came in a wider part of the conversation about how the left is more “vicious” than the right—and that the left in American politics plays “cuter and tougher.”

“So here’s the thing—it’s so terrible what’s happening,” Trump said when asked by Breitbart News Washington Political Editor Matthew Boyle about how the left is fighting hard. “You know, the left plays a tougher game, it’s very funny. I actually think that the people on the right are tougher, but they don’t play it tougher. Okay? I can tell you I have the support of the police, the support of the military, the support of the Bikers for Trump – I have the tough people, but they don’t play it tough — until they go to a certain point, and then it would be very bad, very bad. But the left plays it cuter and tougher. Like with all the nonsense that they do in Congress … with all this invest[igations]—that’s all they want to do is -you know, they do things that are nasty. Republicans never played this.”

These are ravings suitable for a tinpot dictator, not the chief executive of a representative democracy. It’s sheer lunacy to think that the Speaker of the House would issue subpoenas against random political opponents of the President. That Ryan rightly refused is to his credit, although one can reasonably wonder why he didn’t bring the demands to public attention.

Trump’s reference to having “the support of the police, the support of the military, the support of the Bikers for Trump” in conjunction with a suggestion to “play it tougher” can certainly be perceived as a call for violent action. More likely, though, it’s just a the rantings of someone who wants to appear “tough” who has no idea what toughness actually entails. Still, to quote Candidate Trump, it’s sad.