Considering that it’s the first nation to have an openly gay head of government, the fact that Iceland has legalized gay marriage shouldn’t be surprising:

The Althingi parliament voted 49 to zero to change the wording of marriage legislation to include matrimony between “man and man, woman and woman,” in addition to unions between men and women.

Iceland, a socially tolerant island nation of about 320,000 people, became the first country to elect an openly gay head of state in 2009 when Social Democrat Johanna Sigurdardottir became prime minister after being nominated by her party.

“The attitude in Iceland is fairly pragmatic,” said Gunnar Helgi Kristinsson, a political scientist at the University of Iceland. “It (gay marriage) has not been a big issue in national politics — it’s not been controversial.”

The prime minister’s sexual orientation garnered far more interest among foreign media than in Iceland, where the attitude toward homosexuality has grown increasingly relaxed in the past two or three decades, Kristinsson added.

Iceland’s protestant church has yet to decide whether to allow same-sex marriages in church, although the law says “ministers will always be free to perform (gay) marriage ceremonies, but never obliged to.”

The other eight nations that have legalized gay marriage are The Netherlands, Belgium, Spain, Canada, South Africa, Norway, Sweden, and Portugal. 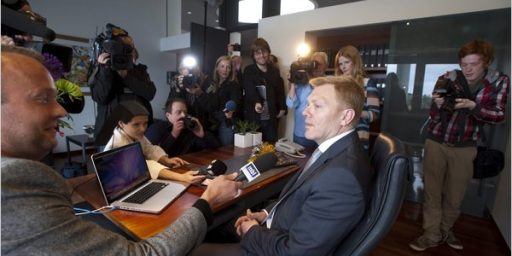