One down. How many more to go? 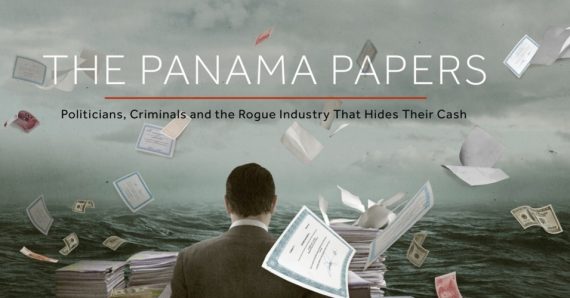 The release of tens of thousands of documents from the records of a Panamanian law firm has claimed its first victim, the Prime Minister of Iceland:

LONDON — The prime minister of Iceland submitted his resignation on Tuesday, according to his deputy, succumbing to political pressure two days after an enormous leak of documents from a secretive Panamanian law firm about offshore shell companies and tax shelters.

The resignation of the prime minister, Sigmundur David Gunnlaugsson, signaled the first prominent political casualty from the document leaks known as the Panama Papers, which have shed a harsh light on the private financial activities of many rich and powerful people.

Officials around the world, from Europe to Asia to the Americas, were scrambling on Tuesday to contain the fallout — particularly in Britain, where Prime Minister David Cameron, who has portrayed himself as a champion of financial transparency, was battling revelations in the leaks that British-governed territories are vast havens of hidden wealth, including for members of his own family.

The leader of Britain’s opposition Labour Party, Jeremy Corbyn, called for an independent investigation into the tax affairs of all Britons linked to the Panama revelations — including Mr. Cameron’s family — and for Britain to impose direct rule on its overseas territories and dependencies, if necessary, to get them to comply with British tax law.

“The government needs to stop pussyfooting around on tax dodging,” Mr. Corbyn said.

Mr. Gunnlaugsson’s resignation was announced on television by Sigurdur Ingi Johannsson, a government minister and the deputy chairman of his Progressive Party, and was greeted with celebration by Icelanders who have been protesting against him.

The move still requires the formal approval of both Mr. Gunnlaugsson’s junior coalition partner, the right-wing Independence Party, and Iceland’s president, Olafur Ragnar Grímsson. It was not immediately clear how the country’s other parliamentary parties would react. Early elections in Iceland, a tiny island nation of 323,000 still recovering from the global financial crisis eight years ago, could still be a possibility.

The leaked Panama Papers consist of more than 11.5 million documents, involving nearly 215,000 companies and 14,153 clients of the Panamanian law firm Mossack Foneca, according to the German newspaper Süddeutsche Zeitung. It shared the information with the International Consortium of Investigative Journalists, a nonprofit group, which helped analyze the data and shared it with a number of other newspapers, which began reporting the findings on Sunday.

The politicians, celebrities and sports figures identified in the leaks included close associates of President Vladimir V. Putin of Russia; President Petro O. Poroshenko of Ukraine; Prime Minister Nawaz Sharif of Pakistan; current and former members of China’s ruling Politburo; and FIFA, the worldwide association for soccer. It has also emerged that Mossack Fonseca worked with 33 people or companies that were the subject of international sanctions, including a relative of the Syrian president, Bashar al-Assad.

Mr. Gunnlaugsson had insisted on staying in office after the leaked documents revealed that he and his wealthy partner, now his wife, had set up a company in 2007 in the British Virgin Islands through Mossack Fonseca. The documents also suggested that he sold his half of the company to her for $1 on the last day of 2009, just before a new law went into effect that would have required him as a member of Parliament to declare his ownership as a conflict of interest.

Mr. Gunnlaugsson had said that the leak contained no news, adding that he and his wife, Anna Sigurlaug Palsdottir, had not hidden their assets or avoided paying taxes.

But the company, Wintris Inc., lost millions of dollars as a result of the 2008 financial crash, which crippled Iceland, and the company is claiming about $4.2 million from three failed Icelandic banks. As prime minister since 2013, Mr. Gunnlaugsson was involved in reaching a deal for the banks’ claimants, so he was accused of a conflict of interest.

In Britain, repercussions centered on Mr. Cameron’s late father, Ian, a stockbroker and investment manager, who was among those named as having used the Panamanian law firm to set up a company based offshore in the British Virgin Islands, a British overseas territory.

While there was no suggestion of illegal activity, the overseas investment fund paid no British tax, and the opposition Labour Party wants to know if Prime Minister Cameron retained any interest in the offshore fund, which he denies, and wants him to publicize his tax returns.

In a further embarrassment to Mr. Cameron, who has claimed leadership in the global fight to crack down on tax havens, the documents also reveal that Britain’s self-governing overseas territories, especially the British Virgin Islands, proved a favored location for companies handled by Mossack Fonseca.

According to the International Consortium of Investigative Journalists, 113,000 of the nearly 215,000 companies Mossack Fonseca is known to have arranged were set up in the British Virgin Islands. A further 3,000 were set up in other British jurisdictions, including British Anguilla, Jersey, the Isle of Man and Britain itself, according to The Guardian, which also has access to the leaked documents.

The economy of the British Virgin Islands is largely based on such secrecy, with just over half of all government revenues coming from incorporation fees. More than 950,000 offshore companies have been incorporated there.

With economic inequality a growing political issue in Britain, Mr. Cameron’s privileged upbringing and personal wealth make him vulnerable to such attacks, particularly at a time when his government is reducing spending on welfare payments to the poor.

Absent evidence that he personally benefited from the transactions detailed in the documents, it seems unlikely that Cameron will be seriously damaged by the issues surrounding the revelations from these documents, much less that he would suffer the same fate as the Prime Minister of Iceland. For one thing, based on the description of the documents that have been made public, it would appear that it is Cameron’s late father Ian and his older brother Alexander who were primarily involved in the investments in question and it’s not clear that the Prime Minister himself was even aware of what they were doing in their own business and investment activities. For another, the Conservative majority is such that it is unlikely to fall before the next General Election and, in any case, Cameron has already announced that he would be stepping aside as leader of the party at some point before the 2020 General Election. Absent some evidence that Cameron was personally involved in the transactions in question, or that he used his influence to assist his father and brother in going through with the transactions, it seems doubtful that this will have a long term impact in Britain. With more than 11 million documents out there, though, it’s hard to definitively say that there is no smoking gun so this could be an issue that Cameron will have to deal with for some time to come, so it’s probably fortunate for him that this story is breaking this year rather than last year when we were just about a month away from the General Election at this point.

As for the situation in Iceland, it’s not entirely surprising that the Prime Minister’s fate was decided so quickly. The island nation has been one of the few jurisdictions in the world to have cracked down significantly on its financial industry in the wake of the 2008 financial crisis, to the point that the heads of several top Icelandic banks and investments firms ended being criminally prosecuted and the banks forced to repay investors who lost money during the crisis. The fact that the Prime Minister apparently used inside knowledge gained as a result of his government position to restructure his investments so he and his future wife would receive compensation, without having to reveal the existence of those investments and perhaps raise questions about others, was apparently too much for the public to bear. Whether other world leaders will suffer a similar fate in the weeks and months to come remains to be seen.