Independent candidate Evan McMullin is at the top of a new poll out of Utah, a state that hasn’t gone for a Democrat since 1964:

McMullin is favored by 31 percent of likely voters in the state. Republican nominee Donald Trumphas the support of 27 percent, and DemocratHillary Clinton is backed by 24 percent.Another 5 percent support Libertarian nomineeGary Johnson, and 12 percent are undecided.

The poll finds both Trump and Clinton are viewed unfavorably by a majority of likely voters in the state.

The poll finds 51 percent of Utahns who supported Sen. Ted Cruz (R-Texas) the state’s caucuses are backing McMullin and only 29 percent are supporting Trump.

Among likely voters who supported Ohio Gov. John Kasich in the March contest, only 4 percent plan to cast their ballots for Trump in November.

McMullin leads his rivals among people 18 to 34, with 36 percent support. Trump has the advantage among likely voters aged 55 and older.

This isn’t the first poll to show McMullin performing strongly in Utah. A recent poll conducted for Heat Street by Rasmussen found Trump at 30%, with McMullin just one point behind at 29% and Clinton in third place at 28%. Trump continues to lead in the RealClearPolitics average, but that’s largely due to past polling that either didn’t consider McMullin at all or hadn’t captured the turn against Trump that is apparently happening here. In any case, the fact that McMullin is a Mormon, combined with what is clearly widespread disapproval for both Clinton and Trump is no doubt contributing to what is going on here. Even if Trump ultimately ends up winning the state, poll numbers like this will likely require the campaign and the RNC to pay more attention to the state than they clearly otherwise would have. On the other hand, if McMullin actually ends up winning the state it would be the first time that a someone other than a Republican or a Democrat won a state in a Presidential election since George Wallace did it in 1968. Needless to say, a McMullin win, or a Clinton one if his strong performance allows her to pull off a win, would make it all the much more difficult for Trump to get to 270 Electoral Votes. 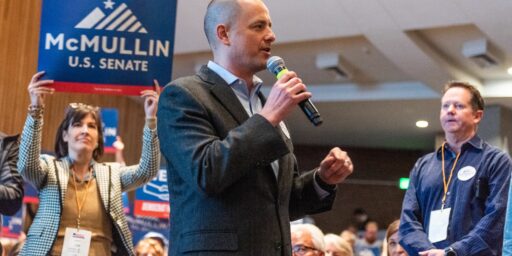