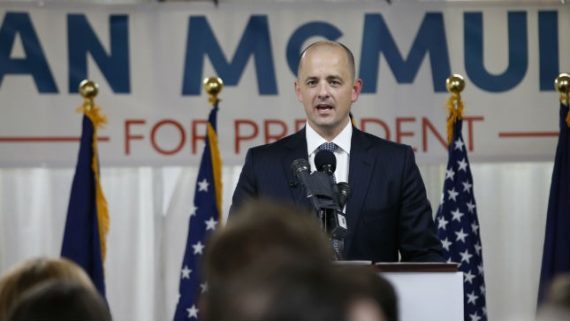 It’s been several weeks now since former CIA employee and conservative pundit Evan McMullin announced his quixotic bid for the White House, since then the campaign has seemingly been mostly concerned with getting on the ballot in as many states as possible, but it turns out it’s even less serious than that:

In all nine states where he has officially qualified on the presidential ballot, McMullin has listed a “Nathan Johnson” as his vice presidential nominee. McMullin’s campaign won’t provide any more information about Johnson — including which of the thousands of people named Nathan Johnson the campaign is referring to — saying he is only a placeholder until McMullin names an actual running mate.

Yes, you read that right. We’re sixty-two days away from Election Day and McMullin hasn’t selected a running mate yet. To be honest, I’ve been paying so little attention to McMullin’s campaign that I had not even realized that they had not selected a Vice-Presidential running mate. The thought had occurred to me at one point, but I didn’t give it much more thought because, surely, I thought, they would have taken care of that technicality already given the short amount of time until Election Day and the fact that early voting will begin in many states in just about a month. It turns out that they haven’t even selected a running mate yet, though, and that they may be stuck with “Nathan Johnson,” whoever the heck that is:

In eight of the nine states, top election officials say McMullin’s campaign can’t pull Johnson’s name off the ballot, and that it’s “Nathan Johnson” — not whomever McMullin eventually names as his pick for Vice President — that will appear on the ballot.

If McMullin is indeed stuck with Johnson on the ballot, it marks an embarrassing setback for a candidate already struggling with a lack of national name recognition, a small budget and a late start to his race. And it provides more fodder to McMullin critics, who say his bid for president is less a serious run for higher office than an attempt at self-promotion.

“It cannot be changed. We already have machines that are complete,” Louisiana Secretary of State press secretary Meg Casper said. The situation is the same in Iowa, Minnesota, Arkansas, Idaho, Utah, Virginia, and South Carolina according to top election officials with the secretary of state offices in each state.

“The clerks will begin printing the ballots now, so there is no way to change it. Yes Johnson is the V.P.,” Mark Thomas, the Utah Director of Elections for the Lieutenant Governor’s office said after his office finished certifying his state’s ballot last week. Thomas also said that his office had not heard anything from McMullin’s campaign about making a change to the ballot.

In Virginia, the state statute only allows substituting a different name before the ballot has been certified, but the ballots were certified on Sept. 2.

The one exception is Colorado, where McMullin has until September 9 to change Johnson’s name, said Colorado Secretary of State’s office spokeswoman Lynn Bartels.

“It’s a placeholder,” said Rick Wilson, McMullin’s senior adviser and chief communications officer, in response to questions about Johnson. “We will have a V.P. nomination. I don’t personally know the guy. He’s somebody that they vetted as a placeholder. That’s all it is.”

“We thought it would be inappropriate to just grab the first person that walked off the street instead of vetting them, which is what we’re doing,” Wilson said Tuesday. “Nathan is a guy who’s on the ballot right now with the full understanding that this is going to swap out in the immediate future. Our legal people have also had a long look at this thing and they’re confident that we can do this, we can make this thing work.”

As a technical matter, this is hardly going to matter, of course. At the moment McMullin isn’t even being included in the polling in any of the states where he’s on the ballot. If he was, I suspect he’d register somewhere close to 0% with nearly all the respondents saying that they have no idea who he is. He doesn’t appear to be getting much if any notice from the cable news outlets, although he may be appearing on Fox News Channel which I wouldn’t know since I typically don’t watch that network, so that’s unlikely to change any time soon. Most importantly, with even Gary Johnson struggling to get to the 15% threshold to be eligible for a debate invitation, it’s extremely unlikely that McMullin will get a debate invitation at all. All that boils down to the fact that he’s not going to win any of the states where he does make the ballot. The best he is likely to do is draw away some small portion of conservative Republicans who don’t want to vote for Trump but can’t bring themselves to support either Clinton, Johnson, or Stein, and to be honest it’s unlikely that he’ll do so in any state. Moreover, in the unlikely event that McMullen did end up winning a state the Electors voting on his behalf (and I’m assuming his campaign has selected electors in each of the states where he’s on the ballot or will do so by whatever deadline may still be in the future) could vote for whomever they wished for Vice-President. So, McMullin isn’t necessarily stuck with “Nathan Johnson,” who, for all we know, is the manager of the local Applebees in McMullin’s hometown.

Notwithstanding the fact that this isn’t as big a problem as it might seem, it does seem to be a sign of just how unserious this campaign really is, and how little thought the anti-Trump forces behind his campaign seem to have put into their efforts to stop Trump from the beginning. In addition to starting way too late, the effort has always seemed as though it has been half-hearted and reactionary in the sense that it merely reacted to what Trump did rather than being pro-active in trying to stop his campaign, undermine the arguments he was making to voters, or engage him on the issues. Of course, it didn’t help that they were dealt a bad hand in the form of opposition candidates who seemed genetically incapable of confronting a man who is nothing more than a bully and thug who appeals to people through fear and ignorance. Nonetheless, if they were going to take the radical step of breaking from the GOP completely and running an independent candidate it might have helped if they’d started sooner, had a better ballot access strategy, picked someone who actually seemed like they could be a contender for the White House (assuming they could find one willing to run, which seems as though it was an impossible task), and, well, picked a Vice-President before Labor Day. As it stands, McMullin is not going to be on enough ballots to make a difference in the election. In those states where he is, though, voters looking for an alternative to Trump should perhaps consider a candidate that actually seems to be serious about running.