Charles Krauthammer refers to a John Keegan op-ed that got wide play in the blogosphere, including OTB, earlier in the week:

Keegan’s larger point was contemporary, however. “The British and American media retail with evident satisfaction every scrap of information” — bad war news, coalition soldiers’ misconduct — that “undermines any expectation by readers and viewers of a successful outcome to the Iraqi involvement.” That the transition from the coalition conquest of last April 9 to whatever new Iraq emerges will be difficult, bloody and contentious is the historical norm, argues Keegan. Yet it has been used by critics to discredit both the war and Bush and Blair for having undertaken it.

Keegan does not just know more history than all the sage Iraq critics combined. Within hours, his resistance to the Iraq panic sweeping Washington and London was looking prescient. The panic-mongers had been telling us that all was chaos, that the June 30 date for the handover of power to an interim Iraqi government was approaching with nothing but violence and bickering and no one to hand the reins to.

As of this week, we have an interim Iraqi government, remarkably balanced in terms of ethnicity, region and tribe. Such encouraging developments, however, are apparently not to be permitted to puncture the current defeatism.

He then goes on to detail and debunk several “strange” media reactions to this and other good news coming out of Iraq, which he contrasts with their reaction to other events:

Then comes my favorite: The new government has no legitimacy because it is composed of so many exiles. What kind of political leadership does one expect in a country that endured three decades of Stalinist tyranny in which any expression of opposition met with torture and death?

Strange. I do not remember any of these critics complaining about the universally hailed Oslo peace accords that imposed upon the Palestinians a PLO government flown in from Tunisia composed nearly entirely of political exiles.

Ah, but Yasser Arafat, thug and terrorist, instantly wins legitimacy in the eyes of Western intelligentsia because he is a self-proclaimed revolutionary, while Iraq’s interim prime minister, who was nearly axed to death by Hussein’s agents in London, is dismissed as an “exile.”

Who better than these exiles — some rather heroic, many of whom created and sustained organized political opposition for decades — to run a transitional government? Note: Transitional. Unlike the Palestinian Authority, a tyrannous kleptocracy that grabbed power and has not relinquished it for 10 years, this Iraqi government will be out of business in seven months. Its major function is to prepare elections, which will ratify the rise of indigenous leaders who have emerged in the (by then) year and a half since the fall of Hussein.

Yes, Iraq is a mess. Postwar settlements almost invariably are. Particularly in a country where the removal of a totalitarian dictator leaves a total political vacuum. Of course there are difficulties and dangers ahead, and no guarantee of success. But the transition to Iraqi rule is underway. The first critical step has just been taken.

An interesting point. I agree that, after several missteps and a lot of bad news, things are certainly looking up at the moment. Obviously, they could quickly swing back in the other direction, since the terrorists always have the initiative.

This morning’s news has mostly been overshadowed by the Tenet resignation and various overseas trips.

The endorsement from Sistani, in a statement, was seen as a boost to the legitimacy of the interim government that was sworn in Tuesday behind a U.S. security perimeter and assigned to lead Iraq to its first democratic elections by January. But the demand that it obtain complete sovereignty foreshadowed difficult times ahead for the Bush administration, which has insisted on retaining command over the 130,000 U.S. troops still engaged in fighting a persistent insurgency.

Apparently with that in mind, Sistani declared one of the interim government’s most urgent tasks is trying to obtain “a clear resolution from the Security Council returning to Iraqis sovereignty over their land, full and unflawed in any of its political, economic, military or security aspects, as well as to strive to remove all the consequences of the occupation.”

The United States has pledged to hand over formal sovereignty to the interim government on June 30, when the U.S.-run Coalition Provisional Authority under L. Paul Bremer will be replaced by a large U.S. embassy under a veteran trouble-spot diplomat, John D. Negroponte. But alongside the transfer of civilian power — or at least its trappings — U.S. commanders will continue giving the orders in security matters, even if Iraqi officials have different ideas, the administration has said.

This is a huge victory for which our diplomatic team gets none of the credit it deserves. Sistani was a major thorn in our side during the early stages of the occupation. That he has been helping for the last couple of months is evidence that something has happened behind the scenes to get him on board.

NYT — U.S. Training A New Iraqi Military Force To Battle Guerrillas At Their Own Game [RSS] 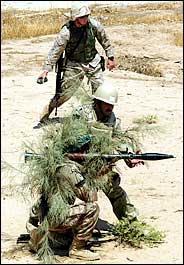 American military advisers are forming an all-Iraqi counterinsurgency force and training it in guerrilla tactics like ambushing trucks and hiding alongside the road camouflaged as bushes.

The new force, called the Iraqi National Task Force, is the most ambitious effort yet to fight the uprising using Iraqis, and it already has 1,000 soldiers, with plans to grow to 7,000.

It is being created as a response to the refusal of a group of regular Iraqi soldiers to face insurgents in Falluja two months ago. That breakdown culminated in a tense standoff on an airfield with eight American marines surrounded by an angry group of 200 armed Iraqis who refused to board helicopters.

“Basically, that scene was the trigger,” said Maj. Gen. Paul D. Eaton, the senior military adviser in charge of training Iraqi security forces. “It was our fault. We tried to send the Iraqi Army into Falluja before they were ready, and they pushed back. After that, we realized we needed a force that was specially designed to fight in urban areas and ready to fight fellow Iraqis.”

“I personally made the mistake with the Falluja incident,” General Eaton said. “I didn’t appreciate all the conflicting loyalties these guys have Ã¢€” to their families, their tribes, their imams, their sects. I’ve learned a lot since then of the psychology of young Iraqi men and what we’re up against.”

LA Times — Iraqi Police May Be Used in Raids

Sadr’s militia controls the Kufa mosque and the Imam Ali shrine in Najaf, two of Shiite Islam’s holiest sites. Army commanders in the area have been ordered not to fire directly at the mosques.

“We can’t have American boots on the ground in those sites,” said Lt. Col. Pat White, commander of the U.S. base near Kufa. “But when Iraqi security forces are ready, they could deny insurgents use of the facilities.”

Many critics, myself included, were calling for this months ago. Still, better late than never. Putting an Iraqi face on the security system is simply vital.

Meanwhile, the Administration is diligently working to ratchet back expectations.

Defense Secretary Donald Rumsfeld on Friday called for more “realistic” expectations on the road toward democracy in Iraq, saying the prisoner abuse scandal had overshadowed progress in the country.

Rumsfeld spoke to U.S. troops on a warship in port as he visited Singapore for an Asia security conference at which he was expected to urge regional leaders to provide peacekeeping support for the U.S.-led military coalition in Iraq.

He stressed that progress was being made on elections, education, women’s rights and other democratic issues in Iraq. But deadly attacks by dissident fighters and abuse of Iraqi prisoners by U.S. troops were perhaps unfairly dominating news reports.

“It seems to me our expectations have to be recast and be realistic. It’s a tough business to get from a dictatorship to a freer system,” he told U.S. Marines and sailors aboard the helicopter landing ship USS Essex.

“The fact that it isn’t perfect in Iraq shouldn’t surprise anybody,” Rumsfeld said in response to questions from troops about news coverage.

Appearing to take a shot at Iraq news coverage, Rumsfeld said that such reporting might have had a similar result during the invasion of Normandy in World War II, led by U.S. Army Gen. Dwight Eisenhower.

“I have often wondered as we approach Normandy and D Day, how that might have been reported if we had had 24-hour news, seven days a week and the folks were being killed as they approached the beach. And the gliders were being spewed across the countryside — many missing their landing targets — and our forces were trapped below Point du Hoc and not able to get up,” he said.

“I suppose they would have called Gen. Eisenhower back for congressional hearings.”