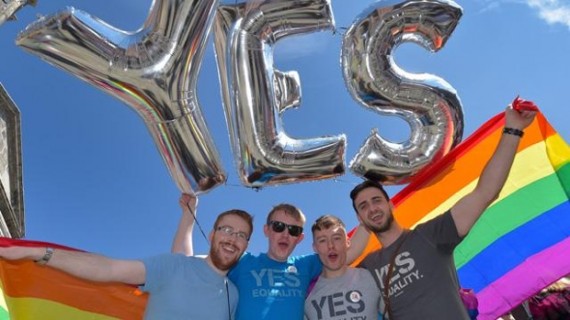 DUBLIN — Ireland has become the first nation to approve same-sex marriage by a popular vote, sweeping aside the opposition of the Roman Catholic Church in a resounding victory Saturday for the gay rights movement and placing the country at the vanguard of social change.

With ballots from 34 out of the 43 voting areas counted, the vote was almost two to one in favor of legalizing same-sex marriage. All but one of the districts that were counted voted yes, and it appeared to be statistically impossible for opposition votes to overcome the ayes.

Turnout was large — more than 60 percent of the 3.2 million people eligible to vote cast ballots. Government officials, advocates and even those who had argued against the measure said that the outcome was a resounding endorsement of the constitutional amendment.

Not long ago, the vote would have been unthinkable. Ireland decriminalized homosexuality only in 1993, the church dominates the education system and abortion remains illegal except when a mother’s life is at risk. But the influence of the church has waned amid scandals in recent years, while attitudes, particularly among the young, have shifted.

The vote is also the latest chapter in a sharpening global cultural clash. Same-sex marriage is surging in the West, legal in 19 nations before the Irish vote and 37 American states, but almost always because of legislative or legal action. At the same time, gay rights are under renewed attack in Russia, in parts of Africa and from Islamic extremists, most notably the Islamic State.

The results in Ireland, announced on Saturday, showed wide and deep support for a measure that had dominated public discourse and dinner-table conversation, particularly in the months before the lead-up to the vote on Friday. Supporters celebrated in gatherings and on the streets, with the rainbow colors of the gay rights movement and Yes vote buttons conspicuously on display.

Surprising many who had predicted a generational divide, the support cut across age and gender, geography and income, early results showed.

With early vote counts suggesting a comfortable victory, crowds began to fill a courtyard of Dublin Castle, a government complex that was once the epicenter of British rule. By late morning, the leader of the opposition, David Quinn, director of the Iona Institute, conceded the outcome on Twitter: “Congratulations to the Yes side. Well done.”

For older activists, the moment marked a profound evolution of their country. For the world, it suggested how far the gay rights movement has come, to make such a significant step in a country with a storied history as a religious stronghold.

“Throughout my youth, adolescence and young adulthood, it was a criminal offense to be gay,” said David Norris, a 70-year-old Irish senator and longtime activist.

He said he had faced “total isolation” as a young man.

The referendum changes Ireland’s Constitution so that civil marriage between two people is now legal “without distinction as to their sex.” It requires ratification by both houses of the Irish Parliament and the president. Though that is a formality, the date when gay and lesbian couples can marry will be determined in that process.

There was support for the measure across the political spectrum, including from Prime Minister Enda Kenny of the center-right Fine Gael party, and his Labour coalition partner, which had pushed for the referendum. Sinn Fein, an opposition party, also expressed support.

The Irish Times has more:

Ireland has officially passed the same-sex marraige referendum with 1.2 million people voting in its favour.

The result was confirmed just before 7pm with the final three Cork constituencies counted.

Roscommon-South Leitrim was the only county to reject same-sex marriage. The No vote there finished with 51.4 per cent.

Donegal, against some expectations, has approved the amendment to the Constitution by a small margin.

Donegal South West was on a razor edge with 50.1 per cent voting Yes, representing a margin of just 33 votes.

The Yes vote in Dublin has been particularly pronounced. Dublin Midwest reported a Yes vote of 70.9 per cent, Dublin Southwest returned 71.3 per cent, Dun Laoghaire 71.6 per cent, Dublin Northwest 70.6 per cent and Dublin South Central 72.3 per cent, all in keeping with an overall 70 per cent positive vote anticipated in the capital. As the result emerged thousands of people gathered, against convention, in the courtyard of Dublin Castle signalling widespread jubilation.

Senior politicians have welcomed the the result with Minister for Health Leo Varadkar saying the overwhelming Yes vote makes Ireland a “beacon of light” for the rest of the world in terms of liberty and equality.

“It’s a historical day for Ireland,” he told RTÉ, adding that if any constituencies voted No, it would only be a handful.

“I have the strong belief – there is a strong belief in the church – about the nature of marriage and the family,” he said, after the result was beyond dispute.

“I would like to have seen that the rights of gay and lesbian men and women could have been respected without changing the definition of marriage. That hasn’t happened but that is the world we live in today.”

The eyes of the world too have been trained on Ireland hoping to carry the first popular vote on same-sex marriage. The story has featured prominently in international media today.

He particularly noted how young people had travelled around the country to “to put a single mark” on a ballot paper, something that demonstrated the value of the issue at hand.

Paul Moran of Millward Brown told RTÉ voter turnout had proved vital and that youth had driven the result, if not entirely deciding it. Social media has played a central role, he said.

No campaigners have congratulated the Yes side. Prominent No campaigner and director of the Iona Institute David Quinn seemed to concede the vote shortly after counting began when he tweeted: “Congratulations to the Yes site. Well done.”

The Iona Institute issued a statement congratulating the Yes side “on their win” which they described as “a handsome victory”.

“We hope the Government will address the concerns voters on the No side have about the implications for freedom of religion and freedom of conscience,” it concluded.

No campaigner Senator Ronan Mullen said he was not surprised by the seemingly “very substantial majority” in the Yes vote but remains concerned about changes to the Constitution and its negative impacts.

Nobody in the No campaign thought it was going to be easy, he said.

“We are operating in a political time and place in Irish culture”, up against a very skilled Yes campaign which had the support of all political parties.

Senator David Norris, who fought from the 1970s to 1993 to have homosexuality decriminalised, welcomed the result. “I believe that by the end of today gay people will be equal in this country. I think it’s wonderful,” he said.

Minister for Children James Reilly said while the same-sex marriage referendum yes vote is strong in Dublin, it is also strong around the country. He says a lot of voters have been thinking about their grandchildren and giving them the same opportunities in life should they be gay.

Ireland will become the first country in the world to approve same-sex marriage by popular vote.

In the weeks leading up this vote, the minimal amount of polling that had been done in Ireland seemed to indicate that there was overwhelming support for the “Yes” campaign but many observers were unsure how reliable those polls were. For one thing, these polls were coming right off of the rather spectacular polling failure in the British General Election, so there was some trepidation about acceptable polls at face value to begin with. Additionally, though, many supporters of the “Yes” campaign spoke about what had happened in California in 2008 when polling indicated that Proposition 8, which reversed a California Supreme Court decision legalizing same-sex marriage, would lose and ultimately the referendum ended up passing. Something similar happened in California four years later with a referendum to legalize marijuana that was doing very well in the polls up until Election Day, only to fail at the ballot. That caused many observers to wonder if there wasn’t a phenomenon regarding polling for referenda on controversial social issues similar to the so-called “Bradley Effect” that led people to tell pollsters one thing while voting another. As it turned out, the polls were largely correct. With all 43 of Ireland’s constituencies reporting, the “Yes” vote comes in a 1,201,607 (62.07%) and the “No” votes are at 734,300 (37.93%). With 60% turnout, one of the highest for a referendum in Irish history, that’s an overwhelming victory for marriage equality.

Rod Dreher, after quoting extensively from the column of “No” advocate John Waters, who accuses the “Yes” forces of a campaign of intimidation among other things, is typically apoplectic:

We are dealing with a less intense version of the same thing here. Gay marriage is going to come to this country by Supreme Court vote next month, but do not be under the illusion that this will settle anything. The “new climate of prohibition concerning certain forms of thought and speech, an Orwellian revisionism directed at texts and records bearing witness to old ideas” is coming to America too. If you don’t see this, you are being willfully blind. Bishops and leaders of the orthodox, or at least officially orthodox, churches — Catholic, Protestant, and Orthodox — who are not soberly but unhesitatingly preparing their people for this is a sign of their dereliction of duty.

There can be no doubt that elites embraced the gay marriage cause early, and have campaigned relentlessly for it. The propagandist role of the news and entertainment media, which barely pretended to neutrality, is one that will be studied by future historians. But we must resist thinking that this outcome is one forced on the rest of us by elites, and we should take this landmark moment to reflect philosophically on why it happened. And, we should stop reacting to every single one of these advances, and step back and consider the long game.

So there you have it. What Dreher is basically saying her is that it isn’t just same-sex marriage that is the enemy, but the Enlightenment and all that has flowed from it that is the enemy of the orthodox Christianity of which he has become enamored, and which he quite obviously prefers would control the society we live in. Considering the fact that one of the most Catholic countries in Europe has just endorsed marriage equality and that polling in our own country shows that support for same-sex marriage is at similar levels to what the Irish people demonstrated yesterday, it would seem rather obvious that he is on the losing end of that argument. But then, the traditionalists lost the battle against the Enlightenment centuries ago. Apparently they still haven’t gotten over it.