The events in Egypt have led some to ask if the mere act of cutting off access to the Internet is, in itself, an human rights violation. 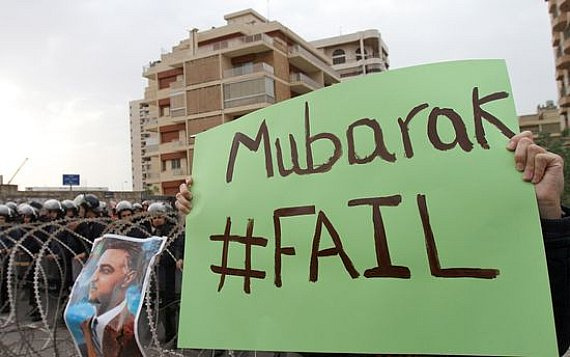 During his nationally televised statement last night on the situation in Egypt, President Obama made the following comment:

The people of Egypt have rights that are universal.  That includes the right to peaceful assembly and association, the right to free speech, and the ability to determine their own destiny.  These are human rights.  And the United States will stand up for them everywhere.

I also call upon the Egyptian government to reverse the actions that they’ve taken to interfere with access to the Internet, to cell phone service and to social networks that do so much to connect people in the 21st century.

The President was referring, of course, to the fact that for most of Friday the nation of Egypt was cut off from the Internet:

Riots and unrest in Egypt have been ongoing all week, but the Internet only seemed to take notice when it affected the Internet. On Friday, news reports revealed that the government had shut down Internet access to its 80 million citizens, also blocking text messaging and mobile services. Access to the outside world was gone, as was the ability to organize protests from within.

Tech blog Mashable.com quickly put up a graphic to help readers visualize the blockage. Online vigilante group Anonymous – most recently in the news for its WikiLeaks hacktivism – threatened to attack the government’s portals, anonymously.

No Internet? It’s a thought so large and abstract as to be nearly unfathomable (How exactly do you “shut down” the Internet? With a giant pair of scissors – snip, snip, snip? Blogs quickly began exploring that question, too.)

Online communities had similar reactions of revulsion in 2007 when the government of Burma (also known as Myanmar) closed off Internet access – images of protesting monks had begun to leak to the outside world; it didn’t look good. Following the Iranian presidential election in 2009, Twitterers worldwide changed their locations to “Tehran” after news broke that the government was cracking down on Iranian Twitter accounts.

The most recent events in Egypt caused some to ponder a question that, on its face, sounds ludicrous: Has society reached the point at which Internet access is a basic human right? Is this public outcry just 21st-century indignation – one born of a world where “social networking” is nearly always something that happens in front of a screen?

Only in a land of First World concerns could the lack of Internet access be considered a violation of basic rights. They have no bread? Let them eat Google.

That last point is something worth considering. The protests in Egypt aren’t just political in nature, there are also deep, ongoing economic problems in the country, most especially the fact that the cost-of-living for the average Egyptian has skyrocketed in recent years.  Like most nations in the Middle East, Egypt is far from a free market economy so when the people have economic discontent it quickly becomes political discontent. In the long run, I’d imagine Egyptians are more concerned about the cost of housing and the fact that there’s high unemployment than they are about whether or not they can access Facebook.

Nonetheless, Egypt’s actions against the Internet and the attention it has received raise interesting questions:

It’s not the loss of Flickr pages and Tumblogs and Sad Keanus that constitutes human rights abuse. Not really. “It’s the idea of freedom of expression and information that’s a human right,” says Arvind Ganesan, who has researched Internet censorship as the director of business and human rights at the Human Rights Watch. It’s right there in Article 19 of the U.N. Universal Declaration of Human Rights: “Everyone has the right to freedom of opinion and expression; this right includes freedom . . . to seek, receive and impart information and ideas through any media and regardless of frontiers.”

The chilling aspect of an Internet clampdown is the assumption that lies behind it: If you will not let your people tweet, what else will you not let them do?

“Over the past 10 years, we’ve changed our media environment to strongly emphasize on-the-ground, eyewitness voices,” says Ethan Zuckerman, a researcher with Harvard’s Berkman Center for Internet and Society. “It feels very strange not to be able to check a broadcast report for ‘authentic’ voices from on the ground.”

The modern Internet has made us untrustworthy of sources that are too “official.” Shutting it down causes one to recall nearly extinct Iron Curtain oppression: the misinformation, the not-knowing, letters being secreted across borders at risk of imprisonment. This outrage over the Egyptians losing their Internet access isn’t a new thing at all. Or, as says Chris Csikszentmihalyi, the director of the Center for Future Civic Media at the Massachusetts Institute of Technology: “The point is not that the Internet has become sacred. The point is that human rights have always been sacred.”

Does this mean that Internet access, or at least the ability to access the internet should be considered a human right in some sense? During the Cold War, the United States protested the Soviet Union’s actions in denying their people access to information from the outside world, perhaps this is just a 21st century extension of that idea.

Photo via The Daily Dish