Islam And World War One

The First World War played an intriguing role in the birth of the radical Islam we are dealing with today. 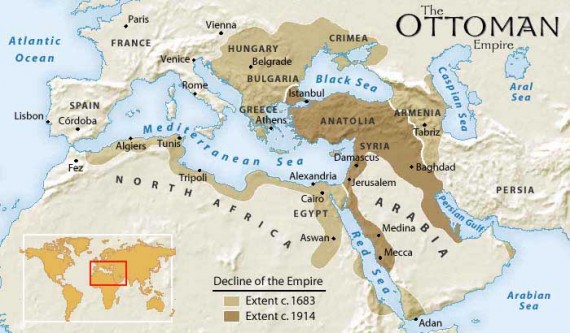 Baylor University History Professor Philip Jenkins makes a provocative argument, namely that the radical Islam that we are familiar with today is yet another of the innumerable consequences of the First World War:

Out of the political ferment immediately following the war came the most significant modern movements within Islam, including the most alarming forms of Islamist extremism. So did the separatism that eventually gave birth to the Islamic state of Pakistan and the heady new currents transforming Iranian Shi’ism. From this mayhem also emerged what would become the Saudi state, dominating the holy places and rooted in strictly traditional notions of faith.

When the war started, the Ottoman Empire was the only remaining Islamic nation that could even loosely claim Great Power status. Its rulers knew, however, that Russia and other European states planned to conquer and partition it. Seizing at a last desperate hope, the Ottomans allied with Germany. When they lost the war in 1918, the Empire dissolved. Crucially, in 1924, the new Turkey abolished the office of the Caliphate, which at that point dated back almost 1,300 years. That marked a trauma that the Islamic world is still fighting to come to terms with.

Later Muslim movements sought various ways of living in such a puzzling and barren world, and the solutions they found were very diverse: neo-orthodoxy and neo-fundamentalism, liberal modernization and nationalism, charismatic leadership and millenarianism. All modern Islamist movements stem from these debates, and following intense activism, Egypt’s Muslim Brotherhood was formed in 1928.

One of the founders of modern Islamism was Maulana Mawdudi, who offered a comprehensive vision of a fundamentalist Islam that could confront the modern world. Although Mawdudi was born in 1903, he was already involved in journalism and political activism before the end of the Great War, and by the start of the 1920s he was participating in the fierce controversies then dividing Muslim thinkers in the age of the Khilafat. In 1941, he founded the Jamaat-e-Islami, the ancestor of all the main Islamist movements in Pakistan and South Asia, including the most notorious terrorist groups.

For many Muslims, resurgent religious loyalties trumped national or imperial allegiances. Armed Islamic resistance movements challenged most of the colonial powers in the post-war years, and some of those wars blazed for a decade after the fighting ended on the western front. That wave of armed upsurges would be instantly recognizable to American strategists today, who are so accustomed to the idea of a turbulent Arc of Crisis stretching from North Africa through the Middle East and into Central and Southern Asia.

One lasting legacy of the Iraqi conflict was the shift of Shi’a religious authority from the city of Najaf. The beneficiary was the emerging intellectual centre of Qom, in Persia, the nursery of generations of later ayatollahs. Although the school’s new heads disdained political activism, they could not fail to see how quickly and easily secular regimes had crumbled over the past decade, leaving clergy as the voices of moral authority and the defenders of ordinary believers. In 1921, the nineteen-year-old Ruhollah Khomeini was already a student at Qom, long before his later elevation to the prestigious rank of ayatollah. Like his counterparts in Egypt and British India, Khomeini grew up seeking a world order founded on a primitive vision of authentically Islamic religious authority.

For Muslims, the Great War changed everything. Modern political leaders look nervously at the power of radical Islam and especially those variants of strict fundamentalism that dream of returning to a pristine Islamic order, with states founded on strict interpretation of Islamic law, shari’a. Terms such as jihadprovoke nightmares in Western political discourse. All these concepts were well known a century ago, but it was the crisis during and immediately following the war that brought them into the modern world.

What we think of today as modern Islam – assertive, self-confident and aggressively sectarian – is the product of the worldwide tumult associated with the Great War. Islam certainly existed in 1900, but the modern Islamic world order was new in 1918.

The Ottoman Empire, of course, was in its final days the modern representation of the great Muslim force that had swept out of Arabia, across the Middle East as far as Egypt, Libya, and Algeria, and northward toward Europe. It’s great conquest was the city of Constantinople, the seat of both what had once been the eastern Roman Empire and Eastern Christianity. Even if World War One had not happened, it’s likely that Ottoman control over the Middle East would have collapsed at some point, and this would especially seem to have been likely once vast oil supplies were discovered in Arabia and the powers that were to be in those areas suddenly began to realize that there could be more advantage to them in being independent than in being vassals of the Sultan. There also likely would have been some kind of nationalism born in this part of the world that would have led to rebellions against Ottoman rule. What would have been less likely, perhaps, is the birth of the radical version of Islam that groups like the Muslim Brotherhood represented, and which we deal with to this day.

As others have pointed out in the past several weeks, World War One also had an impact on the very borders of what we now know to be the Middle East. To a large degree, those borders were determined by the British and French, who had been granted mandates over various parts of the Ottoman Empire’s Middle Eastern territories. Sometimes, the lines they drew made sense, quite often they did not, and to some degree they involved the idea of trying to create a sense of nationalism where one never existed before. In many respects, were are still dealing with the consequences of those decisions in places such as Iraq and Syria.

On a final note, one has to wonder what the idea of a world without a post-war collapsed Ottoman Empire carved up by Europeans would have meant for the State of Israel, or even if there would have been an Israel. Zionism as an idea dates back well before the Great War, of course, at least to Theodore Herzel’s book Der Judenstaat. As a practical matter, though, it was the war and things such as the Balfour Declaration that brought it into the international limelight and, eventually, led to certain promises by the British that some portion of its mandate in Palestine would be set aside as a homeland for the Jewish people. That last part could not have happened without the war, so one has to wonder what would have become of Zionism in a world where Ottoman control over Palestine didn’t collapse all at once, but withered away over time. Perhaps it would have led to the formation of a Jewish state at some earlier point in time, perhaps it might have led to some kind of confederation that would have avoided many of the problems we see today, or perhaps it would have led to wars like we saw in the late 1940s. The other notion, of course, is that if World War One had not led to World War Two and the Holocaust, then the international political pressure to create Israel in 1948 might never have existed at all.