If you think anti-Muslim sentiment in the United States is running high, a look across the Pond will put things in perspective. 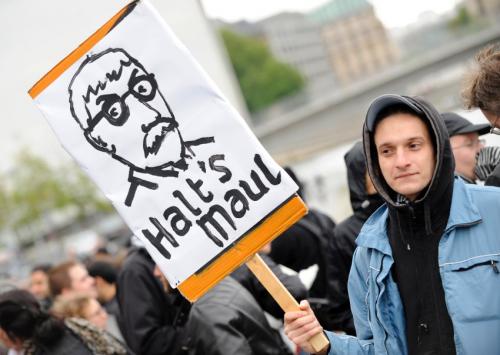 If you think anti-Muslim sentiment in the United States is running high, a look across the Pond will put things in perspective.  In addition to the various hypernationalist parties which have been increasing their strength and the burgeoning “ban the burka” movement that has been passed into law into France and elsewhere, there’s the bizarre case of German central banker Thilo Sarrazin has stirred international controversy with his new book Germany Does Away With Itself: How We are Risking the Future of our Nation, which contains what many believe are anti-Semitic and anti-immigrant sentiments.

I provide a lengthy roundup of the story and reaction at New Atlanticist in a piece titled “Merkel Stands Up Against Islamophobia.”  The upshot is that, while Sarrazin has generated a great deal of sympathy, none of it’s coming from the country’s political leaders.

Chancellor Angela Merkel is hitting all the right notes.  In an interview today with Turkey’s Hurriyet newspaper, she forthrightly declared, “When [Germany’s] Turks have worries and problems, I am their chancellor, too.”

It’s an unfortunate if natural human tendency to lash out at “the other,” particularly when times are hard.   But it’s the duty of political leaders to stand up against the more virulent forms of this, and Merkel is meeting it admirably.   Others, including French President Nicolas Sarkozy, could learn much from her example.