Vice-President Biden made a bold promise on Meet The Press this morning:

Despite uneven progress in Afghanistan, Vice President Joe Biden said next summer’s planned withdrawal would be more than a token reduction and that the U.S. would be out of the country by 2014 “come hell or high water.”

Biden’s prediction appeared to go further than statements by his boss, President Barack Obama, who just last month said there would be a reduced U.S. footprint in Afghanistan by 2014 but that the number of troops that would remain was still in question.

Obama has discussed maintaining a counterterrorism capability in Afghanistan after 2014. As recently as Dec. 16, he said the U.S. and its NATO allies would have an enduring presence there after 2014, although the details of that were unclear.

The Obama administration has said repeatedly that July would mark the beginning of the troop withdrawals and that their size would depend on military conditions.

“We’re starting it in July of 2011, and we’re going to be totally out of there, come hell or high water, by 2014,” Biden told NBC’s “Meet the Press” in an interview broadcast Sunday.

Of course, the Presidential election that will take place between now and then will have something to say about that. However, assuming Biden’s promise holds, it seems apparent that the U.S. will be in the middle of withdrawal by the time of the next Presidential Inauguration in January 2013. 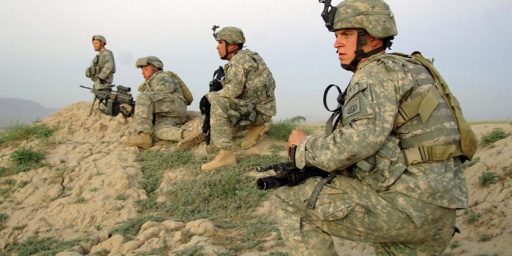