I watched the speech in a somewhat noisy bar last night, so admit that I wasn’t in the ideal setting to soak it up. But Matthew Yglesias pretty much sums up my reaction: “I thought it was crap.” Granted, Matt thought so for entirely different reasons than I did.

Like the John Edwards speech the previous evening, this was almost entirely strung together bits from his standard stump speech. While it’s true that idiots undecided voters pay much less attention to the campaign as it unfolds than myself or my readers, thus making some of this “new” to them, it was tired. Acceptance speeches typically have quite a bit of new material and some soaring rhetoric. This was, at best, an incredibly pedestrian stump speech.

The opening salute with “reporting for duty” was lame beyond words. Jay Severin, interviewed on the Don Imus show this morning, observed that it was more “Village People” than “John Wayne.” I must concur. Not only was it incredibly hokey but it was one of the most half-hearted, limp wristed salutes of all time. Didn’t the Navy teach the man how to render a hand salute? 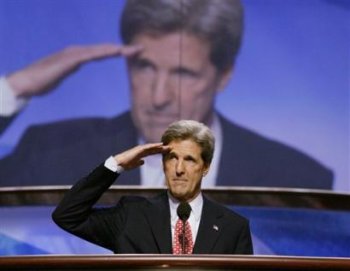 Plus, while I get that he’s apparently basing his entire campaign on the facts that 1) he went to Vietnam and 2) he’s not George W. Bush, I’m constantly bemused that a man who has been in the public spotlight for thirty-odd years wants us to think that he left Vietnam and suddenly emerged last week wanting to be president. His entire political career has been elided for the purposes of the campaign. I honestly can’t recall a presidential nominee who didn’t point to any achievements from his adult career.

Of course, he “Did what he had to do.” Which, I suppose, was deliver a speech so the convention would finally be over.

Update (1038): RealClear Politics, as usual, has an excellent collection of links to Big Media op-eds for the day. Not surprisingly, most deal with the speech. Most dealt with process rather than substance.

Clearly, the assembled delegates would have preferred Dean. Despite most of them being hand-picked Kerry supporters, they appeared to be bored out of their minds the whole time.

Update (1123): Steven Taylor has yet another Toast-o-Meter supplement, including a roundup of the big paper editorial pages. They weren’t too impressed, either.