Given that Michele Flournoy has taken a position in the Obama administration and Kurt Campbell is widely expected to follow, I had been thinking for awhile that John Nagl is now the biggest star at CNAS. Sure enough:

Dr. John Nagl, acclaimed author, West Point graduate, Rhodes scholar, retired Army officer, and Bronze Star recipient, will replace Michele as President of CNAS. John is widely respected for co-writing the U.S. Army’s counterinsurgency field manual, for his book Learning to Eat Soup With a Knife, and for his willingness to guide and mentor members of the younger generation of national security leaders.

John and I were classmates and contemporaries on the USMA debate team a quarter century ago.  He was a more successful debater and cadet than I was and he’s now moved ahead of me in the think tank hierarchy.  He’s a truly remarkable individual, for whom the phrase “a gentleman and a scholar” can be used in its non-ironic sense.

Congrats to John and to CNAS for being bold enough to select a young (as think tank presidents go, anyway) star as its public face. 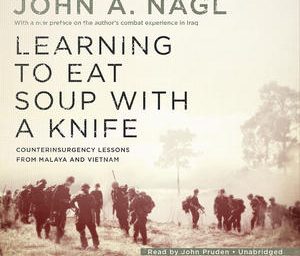