I recall it well, having just recently returned to the States from Germany and waiting to start 8th grade in El Paso.  I’ve seen most of his movies since and become a bigger fan.

Someone (Robert Prather, perhaps) shared via Google Reader a superb tribute by Roger Ebert published earlier this week in the Chicago Tribune.  I recommend it highly.

Alex lists his five favorite Duke movies, and they’re all good.  “Rio Bravo” and “Horse Soldiers” are two of my favorites as well.  I like Wayne in his later years, where his humor was more integral to his roles.  My all-time favorites are “Big Jake,” “The Commancheros,” “El Dorado,” “Chisum,” and “Rooster Cogburn.” The last, a reprise of his Oscar-winning role in “True Grit,” was a more enjoyable movie.

Of his non-Westerns, “The Quiet Man” is easily my favorite.  The WWII flicks “In Harm’s Way” and “They Were Expendable” were also quite superb.

The trailer from “Big Jake” is below.

What are your favorites? 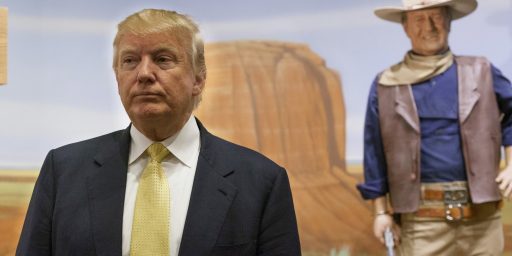