So much for the President's promise about 'no ground troops.' 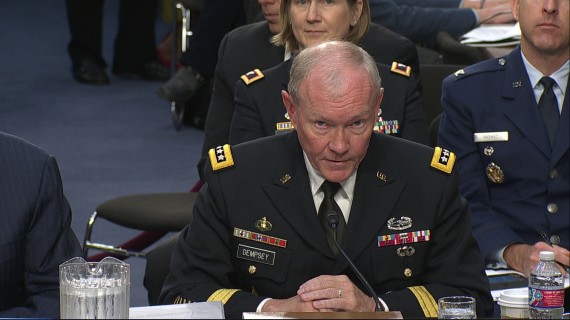 In a hearing today before the Senate Armed Services Committee, Joint Chiefs Chairman Martin Dempsey did not rule out the possibility that American troops might play a role on the ground in the fight against ISIS, although he did say that the did not believe they were necessary at this time:

WASHINGTON — Gen. Martin E. Dempsey, the chairman of the Joint Chiefs of Staff, told Congress on Tuesday that he would recommend deploying United States combat forces against Islamic extremists in specific operations if the current strategy of airstrikes was not successful, raising the possibility of the kind of escalation that President Obama has flatly ruled out.

General Dempsey said that the ground forces would likely be Special Operations commands who could call in airstrikes from the ground.

In testimony before the Senate Armed Services Committee, he said that while he was confident in the ability of the coalition of American, European and Middle Eastern governments to stop the Islamic State, he could not completely close the door to eventually asking Mr. Obama to commit ground troops to fight the group, known as ISIS or ISIL.

“My view at this point is that this coalition is the appropriate way forward. I believe that will prove true,” he said. “But if it fails to be true, and if there are threats to the United States, then I of course would go back to the president and make a recommendation that may include the use of U.S. military ground forces.”

Dempsey got somewhat more specific on the conditions under which the use of American ground troops in a might become possible:

I’ve mentioned, though, if I found that circumstance evolving that I would, of course, change my recommendation. An example: If the Iraqi security forces and the [Kurdish Peshmerga] were at some point ready to retake Mosul — a mission that I would find to be extraordinarily complex — it could very well be part of that particular mission to provide close combat advising or accompanying for that mission.

But, for the day-to-day activities I anticipate will evolve over time, I don’t see it to be necessary right now.

Dempsey’s statements are probably not nearly as controversial or ground breaking as the media is likely to make them out to be. After all, it is his job to propose military options to the President in situations such as this and, regardless of what the political consequences of what that decision might be, it would be irresponsible of him and the rest of the military to neglect to advise the President of the options of using American ground forces in the admittedly limited manner described here. Whether or not to take that step, or to perhaps utilize some other option presented by his military advisers is a decision that the President alone makes. So, when he’s saying that he could conceive of situations where he might recommend to the President that he authorize some deployment of American forces into a ground combat role, Dempsey is really just saying what you’d expect him to say in such a situation. If he had answered that there was no conceivable situation where he would recommend ground troops then he wouldn’t be doing the job that he’s supposed to be doing, which is to present the President with viable military alternatives and then carry out the President’s orders even if they are different from his recommendations.

Despite this caveat, Dempsey’s comments do raise some concerns about the representations that the Administration has made about their plan to fight ISIS and once again point out the need for Congress to become involved. Both in the President’s speech last Wednesday and in repeated comments from White House officials both before then and afterwards, the Administration has made clear that the President’s plan does not involve or contemplate the use of American ground troops. Given the fact the two linchpins of that plan, an international coalition and the so-called “moderate” Syrian rebels, are quite dubious at best, though, these assertions that there would not be ground troops seem to be little more than wishful thinking on the part of the Obama White House. At the very least, the fact that the Pentagon is contemplating the possibility of a ground combat role for American troops, even on a limited basis, suggests strongly that the Administration’s promises shouldn’t be taken seriously.

Additionally, if the commitment we are making today contemplates the possibility of a ground combat role in the future, then it seems essential that the President seek Congressional authorization for proceeding forward. It is clear that the President intends to move beyond the humanitarian role that our airstrikes amount Mount Singar last month played, and beyond the supposed justification of protecting American personnel that was used to justify other airstrikes. As the President said in his speech last week, the United States is now dedicated to degrading and destroying ISIS. The Administration may call this “counterterrorism,” but it sounds an awful lot like a war to me and if this President is going to commit us to yet another war in Iraq then the representatives of the people need to perform their Constitutional duty.

Unless Congress Steps In To Authorize It, The President’s War Against ISIS Is Illegal