Slate’s Jack Shafer argues that journalists’ cries about cuts in the news budgets dire impact on our democracy miss some fundamental changes in technology:

The idea that a newsroom should employ X hundred staffers because it has traditionally employed X hundred staffers ignores the changes technology has made in the news market. For instance, Tribune critics denounce it for cutting the foreign bureaus at the Baltimore Sun and Newsday, which it owns. But should every metropolitan newspaper keep its Moscow or Jerusalem bureaus when readers can click to Web coverage from the New York Times and the international press, especially when many of those papers are losing circulation? Something’s got to give. Likewise, journalists don’t want you to know this, but thanks to technology, it’s never been easier to hunt down a story, capture it, and bring it back to the presses for printing. A middle-school student sitting at a Web terminal has more raw reportorial power at his fingertips than the best reporter working at the New York Times had in, say, 1975. The teenager can’t command an undersecretary of defense to return his phone call as the Times guy can, but thanks to Google he can harvest news stories and background information that would take the 1975 model journalist days to collect.

The young amateur can also tap hundreds of free databases serving up scientific, legislative, regulatory, and business information in an afternoon that a team of 1975 reporters couldn’t assemble in a week. Give him access to JSTOR, PubMed, Edgar, Nexis, Factiva, and other important sites and he’ll write three stories in the time the ’70s veteran reports one. Naturally, the kid might not have as good an idea of what to do with the information he’s collected, but you get my point: Technology has made today’s reporter more productive and more accurate than his forebears. So, if the Los Angeles Times peaked at 1,200 reporters and it’s down to about 940 now and Tribune wants to cut it further, it’s hardly proof that the corporate meanies are defunding the newsroom. 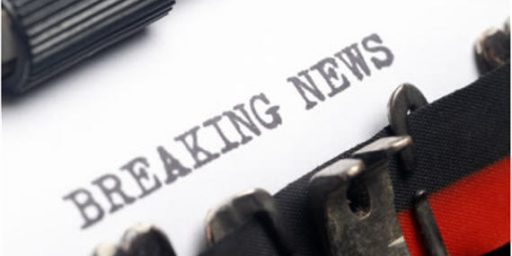