When and how often must they disclose their relationship? And can we take them seriously at all? 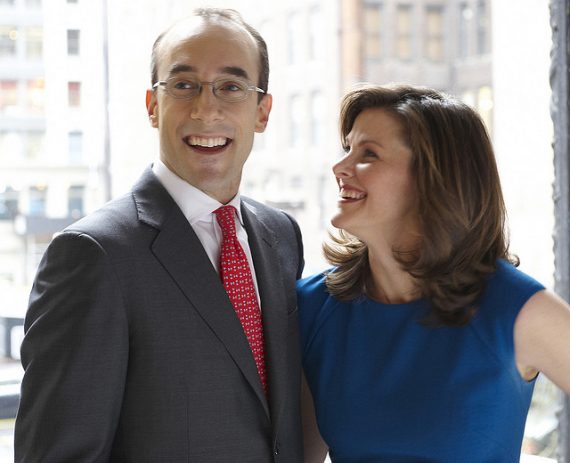 Many prominent journalists have partners who are partisan political operatives. When and how often must they disclose their relationship? And can we take them seriously at all?

Campbell Brown, formerly a CNN personality and wife of Romney advisor Dan Senor, writes about her experiences for Slate (“Confessions of a Romney Wife: Yes, my husband works for Mitt’s campaign. But I still have my own opinions.”).

The degree to which my husband and I agree—or influence one another—is really less the issue than the disclosure. Failing to disclose gives your intellectual opponents a means of distraction, a way to create a diversion so that your arguments go unheard. It is an effective strategy. And I was slow to catch on. Here are the mistakes I have made and tried to learn from.

If you are going to criticize President Obama (as I did in the New York Times over his campaign for the women’s vote) then disclosing a Romney relationship is certainly a no-brainer. Where I apparently failed was in putting the disclosure in the middle of the piece, rather than at the top. Outraged readers filled the comments section and my Twitter feed with their disgust that I didn’t share my Romney connection. Clearly this was super  annoying to the people who wanted to dismiss the piece, but didn’t want to actually read it all the way through. Message received.

Another piece for the Times criticized Planned Parenthood for a weak legislative strategythat I felt was putting its federal funding at risk. I support funding for Planned Parenthood. Gov. Romney does not, so I didn’t think my husband’s role on his campaign warranted disclosure. But what followed was another round of attacks on my disclosure lapse, with Planned Parenthood, its supporters and many of my friends demanding to know why I hadn’t stated that I am “married to a Romney guy.” My mistake this time was not recognizing that during campaign season, you are never allowed to criticize those you support lest you give the other side ammunition to use against them. My bad.

Most recently an op-ed I wrote for the Wall Street Journal was critical of New York teachers unions for supporting a policy that makes it very hard to fire teachers who engage in inappropriate sexual behavior with children. In this case, I failed twice. The teachers union immediately pointed to my Romney tie (apparently in their view only a Romney supporter would oppose sexual predators in school?). They then rightly asserted that  my husband serves on the board of StudentsFirst—New York, an education reform group that advocates for charter schools. He receives no money from the organization, yet the teachers unions blasted me for hiding this connection, and falsely accused me of a financial conflict of interest. Here I failed to disclose because I stupidly did not connect the teachers’ unions’ opposition to charter schools to their support for a system that protects teachers who engage in sexual misconduct. My sincerest apologies to the teachers unions for not fully appreciating how wrong they are on not one but two issues.

As you may have guessed, I am not feeling very apologetic. These pieces represent my opinion and mine alone. If you want a different answer, ask a different girl. I have, however, gone back and forth on the disclosure question many times with a journalist friend. She believes the only way to go is to overshare, because as long as you are a Romney wife, there are certain people who will always believe that you are somehow doing his bidding. (Thank you, Twitter, for allowing me to engage with those people each and every day.)

In the case of an opinion journalist, which Campbell has been since “retiring” from CNN to raise the couple’s two young boys, it matters much less than for a hard news reporter. While disclosure is still useful in letting the reader know of possible conflicts of interest, the pundit’s bread and butter is the marshaling of facts to support an argument. Glenn Reynolds years ago described this as a “low trust environment,” meaning that we don’t take a columnist’s word for things, we simply assess their arguments on their persuasiveness.

Brown makes reference to NBC News political director Chuck Todd, who’s married to  Kristian Denny Todd, a political strategist for several high profile Democrats over the years.  I don’t recall his ever disclosing that fact in the many times I’ve seen him on air. For that matter, Todd himself worked for Democratic candidates before becoming a news guy. Is he probably “in the tank” for the Democrats? Yeah. Does he do a good job of reporting and analyzing the news? I think so.

We live in a different world than existed twenty or twenty-five years ago. Prominent professionals these days are quite often married to other prominent professionals. It’s unreasonable to expect that the spouses of politicians, judges, journalists, and others in a position of trust give up their careers in order than their spouse avoid an appearance of impropriety. Nor is it reasonable to expect that, say, Chuck Todd give a rundown of his wife’s CV every time he does a 2 minute hit on one of NBC’s properties.

I honestly don’t know what the solution is in these cases. In my own case, I’ve put up a Disclosures page for the blog listing various potential conflicts. Maybe we could do that for journalists. That would be especially useful in the case of written commentaries appearing on websites, where a link to the Disclosures could be associated with the author byline. But that really doesn’t work for broadcast journalists, where few viewers and listeners are likely to bother to look up their bios.

At the end of the day, then, it’s up to editors, producers, publishers, and other supervisors to vet their reporters’ work for signs of bias and shoddy work. But die-hard supporters of a party are likely never to believe that a reporter whose spouse works for the other party will give their guys a fair shot. There’s probably nothing that can be done about that.

UPDATE: I posted this as a comment downthread but it’s worth including in the main post:  I understand why the appearance of conflict of interest, and maybe even an actual conflict, might exist. But it’s almost impossible to avoid—especially, I’d think, for a woman.

While a male counterpart could conceivably have a stay-at-home wife or one who’s otherwise not professionally prominent, a Campbell Brown is simply going to be married to a heavyweight. Men often marry down socially; women seldom do. Given that interests that draw someone to political journalism and the social circle that they live in, it’s hardly shocking that it would be a politico. But it would otherwise be a rich banker or someone else who’s quite successful. The chances that there wouldn’t be some sort of conflict, then are especially low.