Ken Cuccinelli Distancing Himself From National GOP On Shutdown

The Republican candidate for Governor of Virginia wants a quick end to the Government Shutdown. 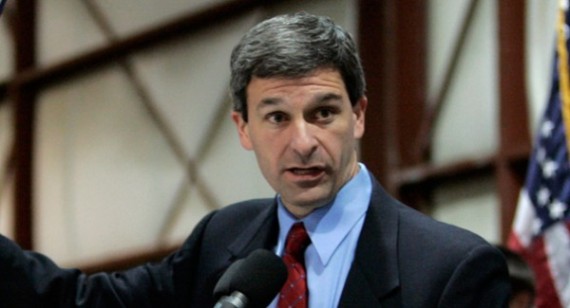 The government shutdown, now winding its way through its fifth day with no end in sight, is becoming an issue in the Virginia Governor’s race:

Fairfax, Virginia (CNN) - Virginia GOP gubernatorial hopeful Ken Cuccinelli said Friday that the Affordable Care Act is “the law of the land” and called on members of Congress to pass a short-term spending bill that would bring the ongoing government shutdown to an end.

“This is no way to run a government, especially a super power,” Cuccinelli told reporters after convening a roundtable discussion with area physicians to discuss flaws in the health care law.

Cuccinelli, who trails Democratic opponent Terry McAuliffe in the polls, avoided blaming his fellow Republicans in the House for the stalemate in Washington, a shutdown that has affected tens of thousands of Virginia workers and military families.

He pointed instead to President Barack Obama and “ridiculous” Senate Democrats for refusing to negotiate over a spending resolution that would de-fund “Obamacare,” as well as other smaller bills that would open parts of the federal government.

But unlike GOP hardliners in the House, Cuccinelli said Republicans and Democrats should agree to pass a stopgap bill that re-opens the government in the short term “just to keep things running,” as long as it does not increase federal spending levels.

Asked if the shutdown is hurting his campaign, the Republican said it’s “dominating people’s attention” because Virginia’s economic vitality is so closely tied to federal government.

“Yes, it is affecting the campaign,” he said.

Cuccinnelli was also asked if he agreed with the Republican running to succeed him as state Attorney General, Mark Obenshain, who said Thursday that Obamacare is now the law, even if he disagrees with elements of the legislation.

“Mark is correct, it’s the law of the land,” said Cuccinelli, who was the first attorney general in the nation to sue tThe federal government over the law, which was ultimately upheld in the Supreme Court last year. “It doesn’t mean that it’s all done and we are set and over with. They don’t even know how they are going to implement it. We are learning a lot as we go here.”

Given the large number of Federal workers and contractors in Virginia, especially in the voter rich areas of Northern Virginia and Hampton Roads/Tidewater, it’s not entirely surprising that Cuccinelli would be taking this position. Of the 800,000 Federal Government employees on furlough because of the shutdown, a large segment live right here in the Old Dominion and there’s really no political benefit to Cuccinelli in adopting the rhetoric of Ted Cruz and the other Members of Congress and the Senate who have been pushing for a hard line for the past three weeks or so, or even to back the plays being called by a House GOP Leadership that seems desperate to find a way out of this mess without causing too many problems with the hard line wing of the GOP Caucus. This is especially true given the fact that Cuccinelli is trailing in the polls and can barely afford to alienate voters over something like this when it seems clear, for the moment at least, that the GOP is going to end up on the losing end of this confrontation.

One problem for Cuccinelli, though, is that he’ll be appearing at a non-campaign event tonight in Richmond alongside none other than Ted Cruz. As The Washington Post notes, this does tend to put Cuccinelli in a tough spot:

Mr. Cuccinelli has spent the campaignwalking a fine line between the rock of Virginia’s purple-state moderation and the hard place of his unstinting conservatism. As the first attorney general in the country to file suit challenging Obamacare, he is a hero to the tea party. But to align himself with like-minded Republicans, who have pushed Congress to its current impasse, risks infuriating everyday Virginians, to say nothing of the state’s 170,000 federal civilian employees, who dislike the government shutdown much more than the health-care law.

That’s why Mr. Cruz, the architect of the current showdown in Congress and the tea party’s champion, is a problem for Mr. Cuccinelli. A bear hug will alienate swing voters. The cold shoulder will incite tea partyers. Perhaps Mr. Cuccinelli will try for a warm but brief handshake.

Either way, one can assume that the McAuliffe campaign will attempt make some effort to tie Cuccinelli to Cruz and the shutdown, which is why Cuccinelli is clearly attempting to undercut that by making the statements he did about a shutdown. Whether it will work or not is hard to say, but as the Post notes Cuccinelli and the Republican Party of Virginia’s statewide ticket is already closely identified in the minds of voters with the Tea Party movement. How credible an effort to create distance at this late date is going to look is an unknown, but if the shutdown lasts for awhile and starts to inflict real pain on Virginia voters and the GOP continues to get the majority of the blame for it, then it’s likely that they’ll be taking their frustrations out on the only Republicans on the ballot this year.