Jack Conway’s attack ad against Rand Paul appears to have had at least somewhat of an impact on the polls:

Are Democrat Jack Conway’s questions about Republican Rand Paul’s religious views in college beginning to pay off? Paul is now ahead by only five points, his smallest lead to date in Kentucky’s U.S. Senate race.

The latest Rasmussen Reports telephone survey of Likely Voters in Kentucky shows Paul with 47% of the vote to Conway’s 42%, his best showing since June. Four percent (4%) favor some other candidate, and seven percent (7%) are undecided. (To see question wording, click here.)

The survey was taken after the candidates’ contentious weekend debate when Conway pushed the message of his new campaign ad that suggests Paul’s antics in college show a lack of Christian faith. Paul reacted angrily and said he may call off the final debate the two candidates had planned. Conway has been denounced even by members of his own party for the ad, but this race now moves from Solid Republican to Leans Republican in the Rasmussen Reports Election 2010 Senate Balance of Power rankings.

Late last month, Paul, an ophthalmologist and political newcomer, posted a 49% to 38% lead over Conway, Kentucky’s current attorney general. In 12 surveys prior to this latest one, Paul has led by seven to 15 points, earning 46% to 59% of the vote. Conway, in those same surveys, has picked up 34% to 42% support.

The biggest sign that the controversy over the “Aqua Buddha” ad is having an impact on the race can be found in the favorable/unfavorable numbers:

Also, 44% of voters said that Paul’s views could be described as extreme (to be fair, 40% said the same thing about Conway).

With only two weeks left in the race, and one debate to go, unless Paul follows through on his threat to skip the final debate

because of Conway’s attack ad, it’s hard to say whether Conway will be able to beat back what is expected to be a GOP tide, especially in Kentucky.

There’s no question that the race has tightened: 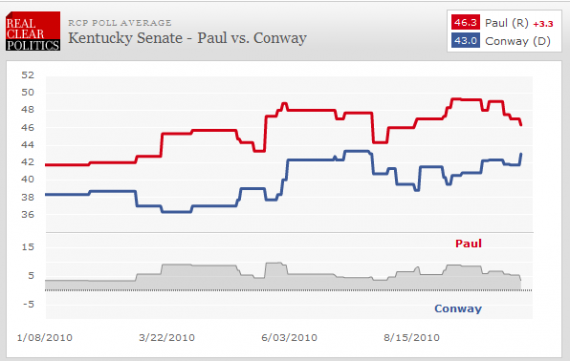 However, with only two weeks to go and projections showing that the Republican voters are far more enthusiastic about voting, a Conway victory just doesn’t seem likely My guess is that Paul will win this with at least a 5 point margin.