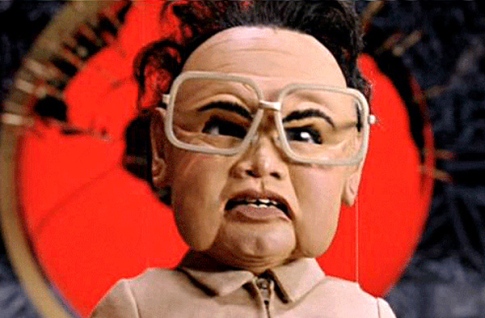 Andrew Sullivan‘s posting of Team America’s depiction of a puppet Kim Jong Il singing “I’m So Ronery” naturally sent me to look for other snippets from the flick. Apparently, I’m not the only one. NY Daily News (“‘Team America: World Police’ surges as Twitter topic following Kim Jong Il’s death“):

The death of Kim Jong Il has brought renewed interest in the North Korean dictator’s most high-profile performance on this side of the Pacific — as a singing puppet in “South Park” creators Trey Parker and Matt Stone’s 2004 comedy “Team America: World Police.” The marionette movie became a high-trending Twitter topic almost immediately after North Korean television announced Sunday night that the country’s “Supreme Leader” had died of a heart attack in Pyongyang at the age of 69. “I will remember Kim Jong Il by observing 90 minutes of silence while I watch ‘Team America: World Police’ this weekend,” tweeted @imagethief. The movie pits a covert team of U.S. military puppets against some of the world’s dictators — including a piano-playing Kim, who croons the politically incorrect song “I’m So Ronery.” “Kim Jong Il, Colonel Gaddafi, Osama bin Laden & Saddam Hussein all dead within the last 5 years. Conclusive proof that Team America exists,” posted FourFourTom.

I am aware of all internet traditions, and this is among its finest. So, too, are jokes that inevitably follow such occasions.

Oh, here’s a montage of all the Kim Jong Il scenes from “Team America.” Probably not safe for work.