New York Knicks Center Enes Katner is at the center of an international legal dispute for speaking out against the President of Turkey. 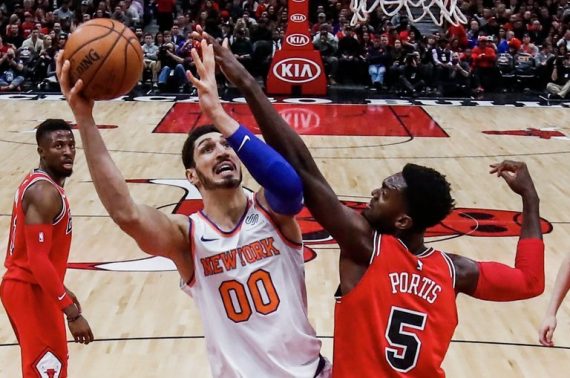 Enes Kanter, the center for the New York Knicks, finds himself at the center of an international dispute thanks to his criticism of the President of Turkey, who happens to be someone who President Donald Trump has frequently praised:

Enes Kanter is one of the more outspoken players in the N.B.A., riffing about LeBron James or Kevin Durant or just about anything else that grabs his attention.

But the Knicks center is never more passionate than when speaking out about his home country of Turkey. And in recent years, as Turkish President Recep Tayyip Erdogan has amassed more and more power, Kanter has emerged as one of Erdogan’s louder and more prominent critics.

Kanter’s decision to be vocal has come at a cost. Out of caution, he has not visited Turkey in years, and in May he was detained for hours at an airport in Romania after the Turkish government canceled his travel documents.

On Wednesday, Turkey’s state-run news agency reported that prosecutors were seeking more than four years in jail for Kanter on charges that he has insulted Erdogan on Twitter. It should be noted that Kanter has 526,000 followers on Twitter, giving him a sizable audience when he has something to say.

Kanter, who is 25 and came to the Knicks in the off-season as part of the deal that sent Carmelo Anthony to Oklahoma City, would be tried in absentia.

On Wednesday, Kanter hardly seemed to be rattled by the notion that Turkey would like to put him in jail.

“Four years? That’s it?” he said to reporters as the Knicks practiced ahead of a game on Thursday against Boston. “For all of the trash I’ve been talking?

Kanter is a supporter of Fethullah Gulen, an opponent of Erdogan who has been living in the United States since 1999. Gulen was accused by Turkey of orchestrating the failed coup attempt against Erdogan in 2016.

Kanter has continued to support Gulen publicly since the failed coup and on Wednesday he criticized Erdogan again, calling him a “maniac.”

Kanter also suggested that the better the Knicks do this season — and so far they are playing above expectations with a 16-14 record — the more it will agitate Erdogan.

“If we make playoffs, then that will drive him crazy,” Kanter said. “Just make the playoffs and drive the dude crazy.”

As a report from earlier this year indicates, Kanter has been in the crosshairs of the government in Ankara for some time now:

Enes Kanter, the Turkish N.B.A. player who was detained in Romania over the weekend, spoke out against President Recep Tayyip Erdogan on Monday in New York and filled in some of the details of his odyssey.

Kanter, a 6-foot-11 center for the Oklahoma City Thunder, was stuck at the airport in Bucharest for hours on Saturday before being allowed to move on. The Romanian border police said he could not enter the country because Turkey had canceled his travel documents.

“If they sent me back to Turkey, probably you guys wouldn’t hear a word from me the second day,” Kanter said on Monday, leaving no doubt that he believed the Erdogan government was the cause. “The reason behind it was, whoever is going to try to go against the president, he’s going to try to shut him down.”

Kanter has been a supporter of Fethullah Gulen, an opponent of Mr. Erdogan who has been living in exile in the United States since 1999. Mr. Gulen was accused of orchestrating last year’s failed coup attempt in Turkey.

Kanter on Monday reiterated remarks he made over the weekend calling Mr. Erdogan “the Hitler of our century.”

In an interview on “CBS This Morning” on Monday, Kanter, who had been on a world tour for his charitable foundation, said his ordeal had begun in Indonesia.

His manager woke him, he said, and told him that “the Secret Service of Indonesia and the army was looking for me because the Turkish government told them that I’m a dangerous man.”

They quickly traveled to Singapore and then to Romania, where they found that Kanter’s documents were suddenly no longer valid.

Kanter said the Department of Homeland Security, the State Department, the Thunder, the N.B.A. and the players union had all been involved in getting him back to the United States.

He tied his troubles to broader human rights issues in Turkey.

“I’m playing basketball in front of millions of people — that’s why I’m here now,” he said. “But there are thousands of people getting killed, raped. It’s really sad to see all this. My friends’ family are in jail. I hope the world is watching this. I want people to do something about it.”

His family in Turkey, including his father, have disagreed with his strong stance. “Of course it’s tough,” Kanter said of the estrangement. “I believe what I’m doing is right.”

Prosecutions for criticizing the government are not uncommon in Turkey, and neither are trials in absentia. Even before the rise of Recep Tayyip Erdogan to power, the powers that be have not been quiet about cracking down on people critical of the people in power. Since Erdogan took office, though, there has been a decided increase in such activity, and much of it has been directed at allies of Erdogan’s perceived political enemies in the wake of last year’s attempted coup, which many believe was organized or inspired by forces outside the country. In Katner’s case, it would appear the mere fact that he’s a high-profile international athlete has only added to the government’s zeal in seeking to prosecute him and use his family against him in the manner that they have.

For the moment at least, Katner it appears that Katner is safe as long as he stays in the United States. His immigration status is unclear, however, and that could prove problematic for him in the future. If he’s only heard on a work-related visa then he could be subject to extradition if he stops playing or is otherwise cut by his team. Fortunately, it appears that Katner actually is a Permanent Resident of the United States, which would make it much harder, or at least more politically difficult for the Erdogan government to seek to extradite him. In either case, though, he’ll likely have to avoid international travel. Or getting on the wrong side of Erdogan’s buddy in the White House.