LeBron James And The Tea Party

Will LeBron James's departure push upset Ohioans to the right ? 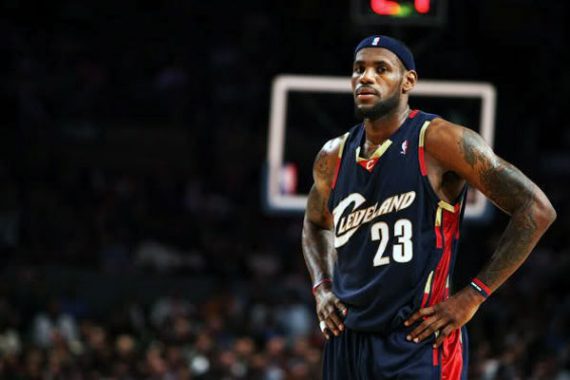 Unless you’re in the middle of a media blackout, you should be aware by now that LeBron James announced last night that he would be signing with the Miami Heat and leaving Cleveland, where he’s played his entire NBC career to date. This morning, The Atlantic’s Joshua Green wonders what political impact James’s decision might have in the Buckeye State:

First, let’s stipulate that reading any kind of meaning into a celebrity sports event is by its very nature pretty ridiculous, more like fortune-telling than the rigorous political analysis you’ve come to expect from The Atlantic. But I have to justify spending all afternoon watching ESPN and reading Bill Simmons (and gawking at models). So here goes.

I’ve spent the week traveling around Texas, particularly the Gulf area southeast of Houston, whose residents have been hit hard by the offshore drilling moratorium, the end of the Space Shuttle, and its successor program, Constellation. At the Fourth of July parade I attended in Friendswood, near the Johnson Space Center, the economic dislocation was palpable. Everybody worried that jobs were leaving and not coming back, so their kids would leave, too. NASA’s decline in particular–Obama’s space policy would end the agency’s manned flights, a source of tremendous local pride–was upsetting to everyone, because the whole area was about to lose its identity.

There were four tents on the parade concourse with political themes: Republican, Democrat, Tea Party, and Glenn Beck’s 9-12 outfit. The first two were nearly empty; the latter two were jammed with people, so I hung out there talking to them. They were angry about a lot of stuff, but the unifying theme was their feeling that they were on the losing end of things, and to hell with the system that had put them there.

Back to Ohio. The unemployment rate is well above the national average, nearly 11 percent. The state’s manufacturing base has been decimated, and those jobs aren’t coming back. And now, suddenly, the biggest star in the state — an economic engine in his own right, and a guy who probably single-handedly made Cleveland a recognizable sports mecca all over the world — has forsaken its residents. And not just forsaken them, but utterly humiliated them by forsaking them on a globally televised ESPN Special!

There’s no doubt that Clevelanders are angry at LeBron this morning — just go take a look at the comments section at Cleveland.com if you doubt me —but if you’re an Ohio voter who’s annoyed at the political establishment’s inability to do anything about the decline of your state other than find new ways to raise taxes, I have to wonder how much of an impact the departure of one basketball player is really going to have on your overall mood.

Interestingly enough, though, there are very few signs that tea party fever has caught on in the land of Woody Hayes. Both the Senate and Gubernatorial races are essentially dead heats, and the Republicans running in both, John Kaisch and Rob Portman, can hardly be said to come from the Tea Party wing of the GOP.

So, will LeBron James push Ohio back into the red state camp ? I’m not sure, but I’m certain that some pundit somewhere will be writing about it.