New polling shows that a majority of Americans are opposed to Justice Brett Kavanaugh's confirmation, but the vast amount of Republicans support it. 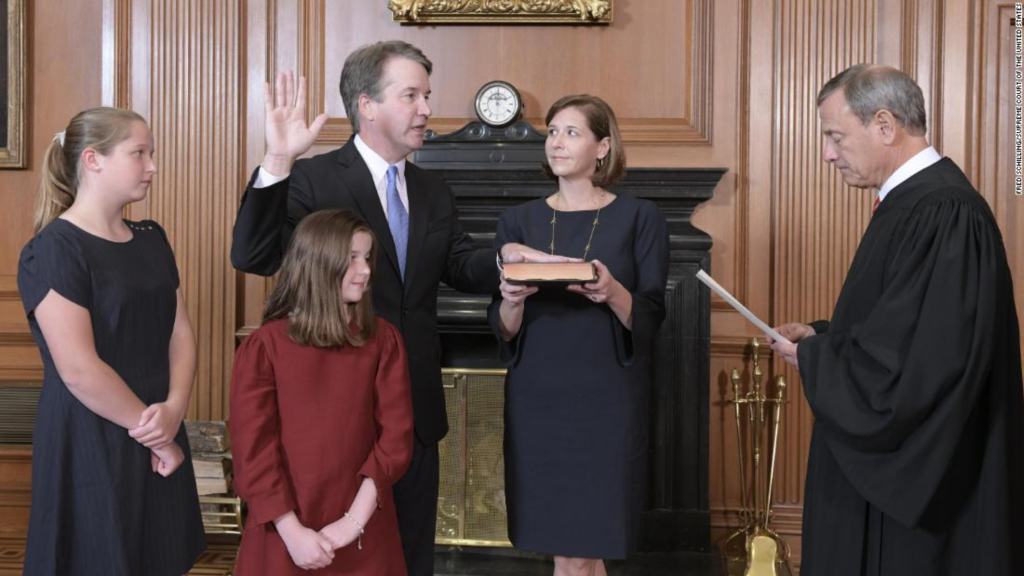 The wrenching battle over Brett Kavanaugh’s nomination to the high court left the public with sharply negative impressions of the new Supreme Court justice and raised questions about his truthfulness, his temperament to serve and whether his partisan views would influence his work on the bench, according to a CNN poll conducted by SSRS in the final days of the fight over his confirmation.

Much of that shift has happened among partisans, with both sides pulling further apart on everything Kavanaugh-related. Among Democrats, 63% opposed his nomination in early September, and that has risen to 91% in the new poll. Among Republicans, 74% backed him in September and 89% do so now.

The public’s take on Kavanaugh is much more negative than it was in early August, not long after President Donald Trump nominated him to fill the seat being vacated by Anthony Kennedy. Back then, 33% viewed him positively and 29% had a negative take. Now, nearly half have a negative view (47%) while 35% have a positive take.

Among Democrats, negative impressions of Kavanaugh have jumped 30 points, from 56% in August to 86% now. Positive views of Kavanaugh among Republicans have grown at the same time, increasing 18 points from 62% in August to 80% now. Among women, 53% now have a negative view, up from 33% in August. Men split evenly, 41% positive to 41% negative, but that’s still an increase in negative impressions compared with a 40% positive to 25% negative divide in August.

Shifts in impressions of Kavanaugh are coming most sharply at the extremes. The share who have a “very positive” view of Kavanaugh climbed from 17% to 24%, and “very negative” from 15% to 33%.

The last three weeks has also had a distinct impression on the public’s perception of Kavanaugh’s character:

All told, 52% of Americans say they believe the women accusing Kavanaugh of sexual misconduct over the judge’s denials of those accusations (38% said they believed him more than the women). And half (50%) said they thought he lied about his alcohol use as a young adult, more than thought he was telling the truth about it (37%). Half say Kavanaugh’s personal conduct has disqualified him to serve on the court, and 53% say his professional qualifications do not outweigh any questions about his personal conduct.

A larger majority, 56%, think Kavanaugh would be influenced by his personal political beliefs when considering cases before the Supreme Court. But the public was more evenly divided over whether Kavanaugh has the temperament to serve effectively on the court, 48% said he did not and 45% that he did.

Still, more say that Kavanaugh did face a “politically motivated smear campaign” (48%) than say he didn’t face such an effort (41%).

The extent to which public opinion about the Kavanaugh nomination changed over time, starting from the time that President Trump announced the nomination at a time when Kavanaugh was relatively unknown: 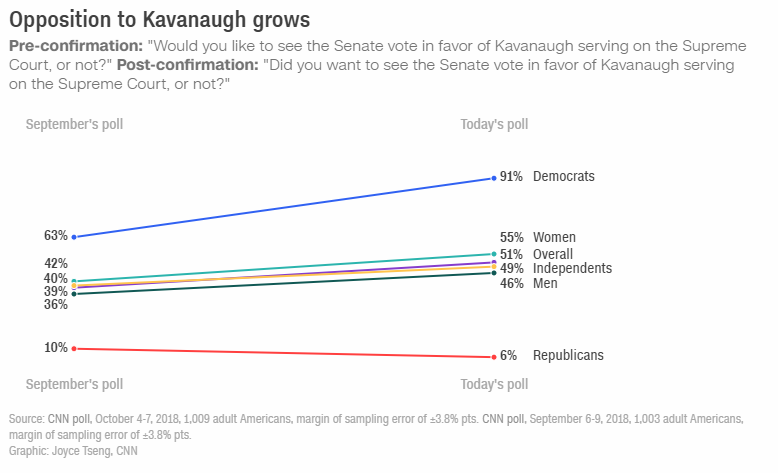 On paper at least, this would seem to suggest that the Kavanaugh nomination will end up hurting the Republicans at the ballot box in four weeks. That very well may be the case, but the poll also explains why the President and Republicans are likely to do their best to keep the controversy stoked by the confirmation battle and the accusations that were made against Kavanaugh in the news. As much as the general public opposes the nomination, Republicans in general support it and see Justice Kavanaugh as the victim of an unfair political hit job. This is one of the reasons why the past three weeks have seen a significant increase in Republican base enthusiasm to vote in November to the point where the two parties are basically equal in that number. If the GOP can keep that enthusiasm going, then they may be able to stem the Democratic tide that some polls indicate may be approaching them. It may not save the Republican majority in the House, but it could make the difference in deciding whether or not Republicans maintain control of the Senate.