Marco Rubio Decides He’s Running For Re-Election After All

Marco Rubio changes his mind, and drops the first hint that he's already thinking about the Presidential race in 2020 or 2024. 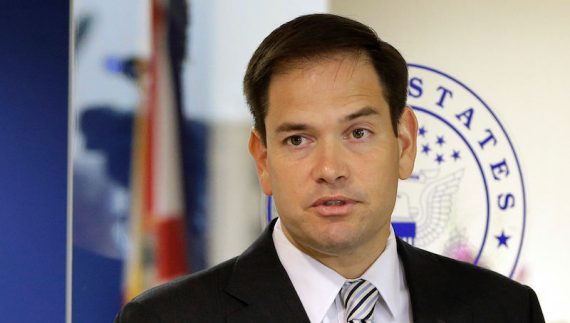 Senator Marco Rubio of Florida said Wednesday that he has decided to seek re-election to the Senate after months of insisting he would not run again, a reversal that will reshape one of the most competitive races in the country.

Mr. Rubio, 45, who is said to be reluctant to give up the high profile that a Senate seat offers, will enter the race with the formidable advantages of incumbency, national name recognition and strong ties to the Republican Party’s donor base.

But he also faces numerous hurdles. He is coming off a bruising race for president that ended with an embarrassing loss to Donald J. Trump in his home state on March 15 — one that focused in no small part on his frequent absence from the Senate and from his duties in Florida as he campaigned.

He also made no secret of his distaste for Washington and the often glacial pace of business on Capitol Hill, words he is certain to see turned against him in attack ads from Democrats who had been optimistic about their chances at taking back Mr. Rubio’s seat before he entered the race.

In an interview with Fox News on Wednesday, Mr. Rubio acknowledged his about-face and tried to explain himself in part by saying, “I changed my mind.”

“I think it’s clearly outlined that I’m frustrated by what’s happening here in the Senate — most Americans are,” he added.

Then, in a dig at the presumptive nominees of both political parties, Mr. Rubio said he ultimately believed that no matter who is elected president, the Senate has the vital role “of being able to act as a check and balance on bad ideas from the president.”

The senator has told colleagues and advisers that he would like to run for president again, either in 2020 or 2024. But he increasingly came to think that doing so from the private sector would be difficult.

His decision is not without considerable risk to his political future, despite his status as a nationally known incumbent who will have the full backing of the National Republican Senatorial Committee.

According to people who have spoken with Mr. Rubio in recent days, the senator is especially concerned about the effect that Mr. Trump’s candidacy could have on his chances of winning. A poor performance in the November general election by Mr. Trump against Hillary Clinton in Florida, with its large Hispanic population, could hurt Mr. Rubio.

In the wake of Rubio’s announcement last year that he was not running for re-election, there was something of a scramble on both sides of the aisle among candidates eager to grab a chance at a rarely open Senate seat. The Democratic side has generally narrowed down to a race between Congressman Patrick Murphy and Congressman Alan Grayson and, by all accounts, it appears that Murphy will easily defeat the firebrand Grayson in the primary at the end of August. On the Republican side, the three strongest candidates — Congressman David Jolly, Congressman Ron DeSantis, and  Carlos López-Cantera, a close Rubio associate and protege who currently serves as Lieutenant Governor of Florida — have all dropped out of the race in the past week in favor of Rubio so he should have relatively smooth sailing in the primary. Rubio will still have to compete against a handful of little known candidates to get the nomination, but considering the fact that he managed to garner 27% of the vote in his second place finish behind Donald Trump in the March Presidential Primary, it seems unlikely that any of those also-rans will be able compete effectively against him, especially since the donor network that was behind his Presidential race and his 2010 run for the Senate will no doubt be behind him again in this bid to stay in the Senate. Looking ahead to the General Election, recent polling has shown Rubio leading both Murphy and Grayson in head-to-head matchups but November will no doubt be a challenge for Rubio given the fact that his Democratic opponent will have the benefit of Hillary Clinton at the top of the ticket, and current polling shows Clinton leading in Florida, although that lead does shrink when you include Libertarian Party nominee Gary Johnson and Green Party nominee Jill Stein. In any case, before today it was looking increasingly doubtful that the GOP would be able to hold on to Rubio’s seat in the fall. Now, they’ve at least got a fighting chance in the Sunshine State and that may be the difference between maintaining a narrow hold on the Senate and losing control to the Democrats when January rolls around.

Chris Cillizza argues that, regardless of whatever arguments he makes for changing his mind, the real reason for Rubio’s change of heart here is quite simple:

Now more than ever in politics (and life) people have short memories and even shorter attention spans. Being out of the national spotlight is the equivalent of political death. And for Rubio, who quite clearly wants to run for president again, he was facing four years (at least) of standing on the sidelines if he didn’t run for a second term this November.

The state’s governorship is up in 2018 — Rick Scott is term-limited out of the job — but state Agricultural Commissioner Adam Putnam (R) has been setting up a run for that office for much of the last decade. Sen. Bill Nelson (D) is up for reelection in 2018 as well, but that’s no easy win against an entrenched incumbent.

So, Rubio was staring down four years of, well, not much. Meanwhile, two other top-tier 2020 GOP candidates — House Speaker Paul D. Ryan of Wisconsin and Sen. Ted Cruz of Texas — would remain in office, serving as either a high-profile check on President Hillary Clinton or an alternate voice to the unorthodox conservatism of President Donald Trump. That was a losing proposition for Rubio — and he knew it.

The calculation Rubio made is that the gamble in re(running) in 2016 was a better one than sitting out two years and running against Nelson or Putnam or waiting four years (or even eight years) to run for president again.

I think he’s right. The 2016 Senate race is not an easy one — not even for Rubio, a known commodity in Florida and a gifted natural candidate. When you factor in the negatives Rubio took on in the 2016 presidential race — he got demolished in the state by Trump in the March presidential primary — and the various dismissive things he has said about the Senate, you have an even more complicated race. Add on the fact that Trump is, at a minimum, unpredictable as a top of the ticket nominee, and you see that this race is probably a 50-50 proposition for Rubio.

If he loses, it’s likely the end of the line for Rubio. Running for president in 2020 or 2024 as an unsuccessful presidential candidate and Senate candidate in 2016 is not exactly a strong foundation on which to build. But, if Rubio passes on this race, it’s uniquely possible that by 2020 the Republican Party has already passed him by.

Cillizza is largely correct here. If Trump loses the General Election and we once again have a crowded Republican field competing for the chance to take on President Hillary Clinton, four years in the political wilderness would not bode well for Rubio at all. If nothing else, many of the people who supported him this time around would likely move on to another candidate and, of course, we don’t know at this point what impact a Trump candidacy is going to have on a Republican Party that is already showing signs of an internal party war. If Rubio stays in the Senate, he’ll be able to stake out his own position in that battle and, assuming he learns the right lessons from his failed 2016 bid, he may actually emerge as a top contender with the ability to take on candidates like Cruz. If he loses, he’ll be in no worse a position than if he had not run for reelection at all, and probably worse off for the reasons Cillizza notes. At the very least, his entry into the race will make the down ballot races even more crucial for the GOP going forward, especially since he could stand to gain a lot of credit if it turns out that his seat is the one that makes the difference between Republican and Democratic control of the Senate. In any case, once again the nation’s eyes will be on Florida on Election Night for more than one reason.