Judging by the comments to my previous post, I think a lot of people didn’t understand what I was getting at, so let me try to simplify and clarify my point.

Bastiat’s point is that when a kid breaks a window that costs 6 francs to replace, that’s 6 francs that could have been spent doing something else, so it’s a net loss of 6 francs.

My point is that it’s a mistake to look at the broken window as a singular event. Since the invention of the window, windows have been broken, either through accident or malice. And stuff in general gets broken, whether through accident, malice, or normal wear and tear. And the entire economy has, baked into its assumptions and projections, the possibility that stuff breaks.

So, as I pointed out, because a kid breaking windows are expected, the price of the window reflects that windows break — they’re cheaper than they otherwise would be. And a competent shopkeeper is going to look for other ways to minimize that loss, whether it’s by budgeting overhead or paying insurance premiums. As a result, the net loss to the shopkeeper is going to be less than the 6 francs that represents the replacement cost.

So the bottom line is, it’s a mistake to look at the replacement cost of the window as a full loss, because in the aggregate, economic decisions are made based on the idea that windows get broken. So overall, the total loss is minimized.

FILED UNDER: Economics and Business, Projections 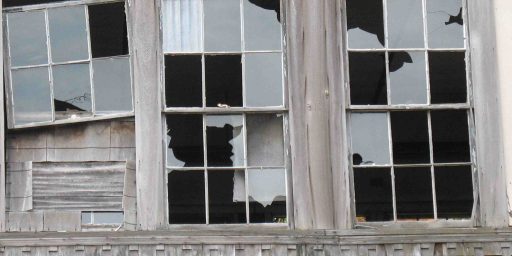