A major milestone has been reached.

NYT Pentagon correspondent Helene Cooper carries on her crusade about the senior leadership of the Marine Corps with her report “After 246 Years, Marine Corps Gives 4 Stars to a Black Officer.”

In the military, there have already been countless promotion ceremonies this year, held on Army bases, aircraft carriers and even, in one case, an escarpment overlooking Omaha Beach in Normandy.

But on Saturday there was one for the history books. Gen. Michael E. Langley, 60, became the first Black Marine to receive a fourth star on his shoulder — a landmark achievement in the corps’ 246-year history. With that star, he becomes one of only three four-star generals serving in the Marine Corps — the service’s senior leadership.

In an emotional ceremony at the Marine Barracks in Washington, General Langley, whose next assignment will be to lead United States Africa Command, acknowledged the weight of his promotion. Before Saturday, the Marine Corps had never given four stars to anyone who was not a white man.

This is indeed a historic milestone. As I noted in March, when Langley’s selection was announced, the timeline presents a stark contrast:

Langley was commissioned in 1985.

At the same time, talking about the “246-year history” of the Corps here simply distorts the picture. As I’ve noted more than once now,

Alexander Vandergrift, who became Commandant in 1944, was the service’s first four-star. The person holding that billet—and there have been only 20 commandants since—was for decades the only four-star general in the Corps. The Assistant Commandant didn’t become a four-star officer until Lew Walt assumed the billet in 1968. And, as shocking as it may seem today, no Marine held a unified combatant command billet until George Christ took the helm of Central Command in November 1985.

Still, as I have also acknowledged,

[G]iven what we know about structural racism and unconscious bias, the fact that so few Black officers make it to the top of the Marine Corps should alarm senior leadership and spur deeper scrutiny. Since most of the “ducks” doing the picking are white men, it’s reasonable to suspect that this fact colors their vision of what a Marine general looks like.

General Langley’s promotion is particularly poignant given that his great-uncle was one of the Montford Point Marines, who were the first Black recruits to join the Marine Corps after it began admitting African Americans in 1942. They trained at Montford Point in North Carolina, which was separate from Camp Lejeune, where white recruits trained.

It had taken Roosevelt’s executive order to force the commandant of the Marine Corps at the time, Thomas Holcomb, to open the service to Black men. “If it were a question of having a Marine Corps of 5,000 whites or 250,000 Negroes,” the Marine commandant once said, “I would rather have the whites.”

Langley is, by all accounts, a brilliant officer. While AFRICOM is arguably the least significant of the Geographic Combatant Commands under our current National Security Strategy, it’s still a high-profile post. It’s not inconceivable that this is not his last stop. He’s four years out from the statutorily mandatory retirement age but it can be extended to 66 by the Secretary of Defense or 68 by the President. Even if he retires from this posting, he’ll forever have shattered whatever glass ceiling existed.

The next challenge, of course, is a Marine woman four-star. The Army’s Ann Dunwoody became America’s first woman four-star back in 2008. Janet Wolfenbarger became the Air Force’s first woman four-star in 2012. And Michelle Howard became the Navy’s first female four-star admiral in 2013. The first woman to achieve even 3-star rank in the Marine Corps was Lori Reynolds, who did so in 2018; she retired last year. Given the size of the service—again, there are simply fewer four-star billets to go around—and its senior ranks being almost exclusively filled by Infantry and Aviation officers, it’ll likely be quite some time before that milestone is reached.

Indeed, it still wouldn’t shock me if Army General Laura J. Richardson became the first woman service chief. She’s had multiple 4-star billets before assuming her current posting heading up Southern Command and is a combat arms officer, having commanded an assault aviation battalion in combat. She’s still only 58, so has plenty of time. 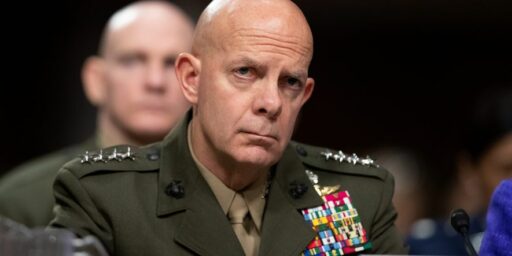