The Bush administration has launched an ambitious bid to promote democracy in the “greater Middle East” that will adapt a model used to press for freedoms in the Soviet Union and Eastern Europe.

Senior White House and State Department officials have begun talks with key European allies about a master plan to be put forward this summer at summits of the Group of Eight nations, NATO allies and the European Union, U.S. officials say. With international backing, the United States then hopes to win commitments of action from Middle Eastern and South Asian countries.

“It’s a sweeping change in the way we approach the Middle East,” said a senior State Department official. “We hope to roll out some of the principles for reform in talks with the Europeans over the next few weeks, with specific ideas of how to support them.”

Details are still being crafted. But the initiative, scheduled to be announced at the G-8 summit hosted by President Bush at Sea Island, Ga., in June, would call for Arab and South Asian governments to adopt major political reforms, be held accountable on human rights — particularly women’s empowerment — and introduce economic reforms, U.S. and European officials said.

As incentives for the targeted countries to cooperate, Western nations would offer to expand political engagement, increase aid, facilitate membership in the World Trade Organization and foster security arrangements, possibly some equivalent of the Partnership for Peace with former Eastern Bloc countries.

The U.S. approach is loosely modeled on the 1975 Helsinki accords signed by 35 nations, including the United States, the Soviet Union and almost all European countries.

The pact was designed to recognize disputed post-World War II borders and establish a mechanism for settling other disagreements. But human rights and fundamental freedoms became key parts of the treaty, giving the West leverage to promote and protect dissident groups in the Soviet bloc and urge greater freedoms for its residents.

Many experts now regard Helsinki as one of the most influential international pacts signed after World War II, and conservatives say it sped the demise of Eastern Bloc communism.

“The idea is not to come out with proposals that say, ‘This is how the West thinks you guys should live,’ ” a senior administration official said. “This can’t be seen as telling these guys what to do. That won’t work. It is instead about saying, ‘We hear voices in the greater Middle East region who want democracy and reform, and here are the things we can do to support them.’ ”

“The key to all of this is to get the [Muslim] countries in question to feel ownership in this process,” a Danish diplomat said. The Danish and Canadian governments have done serious work on the issue and are coming up with their own draft proposals, U.S. and European officials say.

The administration’s general goal is to put meat on the bones of Bush’s call for political change throughout the Islamic world, outlined in two speeches last fall at the National Endowment for Democracy and in London, U.S. officials say.

The administration had originally pledged that ousting Iraqi president Saddam Hussein and creating a Palestinian state would serve as catalysts for democracy. But now that the Arab-Israeli peace process is deadlocked and Iraq’s political transition is in trouble, the United States is effectively leapfrogging both to generate political change in the region, U.S. and European officials say.

Very ambitious, indeed. I’m skeptical that this can work in the near term but the methodology sounds promising. 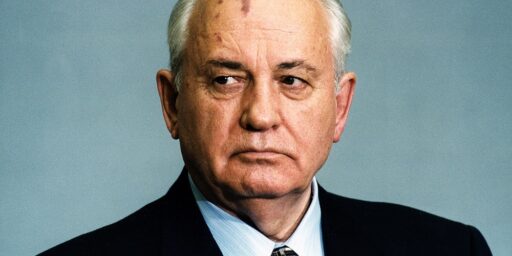