Could Mike Pence make the leap from the House of Representatives to the White House ? It's possible, but history and the likely GOP field in 2012 suggest it would be very difficult. 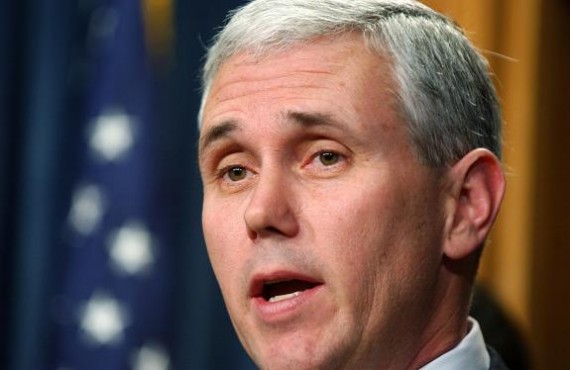 Mike Pence, a four-term Congressman from Indiana who has become much more nationally prominent since President Obama took office, surprised many yesterday by winning the 2012 straw poll at the Family Research Council’s Values Voters Summit:

Indiana Rep. Mike Pence was the top choice for president among conservative activists who attended this weekend’s Values Voter Summit in Washington, edging out a field of more well-known Republican figures in an early test of grass-roots support.

Pence, chair of the House Republican conference, received 24% of the vote, edging the winner of the 2009 straw poll, former Arkansas Gov. Mike Huckabee, who received 22%. Each addressed the gathering on Friday, as did third-place finisher Mitt Romney, who won 13% of the vote.

Of the nearly 2,000 people who registered for the conference, 723 voted in the straw poll. Family Research Council President Tony Perkins, whose group organized the event, said the results were “descriptive of the type of candidate value voters would be looking for.”

“We’re a long ways from the election,” he said. But Pence “represents the qualities and the character that many voters in America are looking for.”

While this straw polls is pretty much as meaningless as the straw poll that’s conducted at CPAC each year, it does provide some level of noteriety to a potential candidate that certainly hasn’t been on anyone’s radar screen.

The question is, while Pence may have the bona fides among social conservatives necessary to get a foot in the race in 2012 if he chooses, does he really have a chance ? For several reasons, it would be an uphill fight for a guy who isn’t very well known outside his home state or the relatively narrow circle in which socially conservative Republicans travel.

For one thing, Pence would have history against him. There have only been two occasions on which a sitting member of the House of Representatives has been elected President. The first was John Quincy Adams, who became President when the Election of 1824 was thrown into the House of Representatives despite the fact that he came in second in both the popular and electoral vote in the election itself. The second was John James Garfield, a noted Civil War General who was elected in 1880. Since that time, the only Congressman to arguably come close to winning the White House was Richard Gephardt, who ran in 1988 and 2004 and performed dismally both times.

It’s somewhat of an historical oddity that this would be the case, of course. Perhaps it’s because Congressman don’t have the same national name recognition that Senators and Governors do (although one would have thought that Gephardt, who was House Minority Leader when he ran in 2004, would’ve overcome that problem). In any case, though, it’s an issue that Pence would have to face to make his campaign credible.

Pence’s bigger problem, though, is that he would be competing for the same voters as several other, probably better funded, candidates. Assuming they run, both Sarah Palin and Mike Huckabee would be competing for the same socially conservative “values voters” as Pence. Last year, it was Huckabee who won the Values Voters Summit straw poll, for example. As for Palin, she’d be a force to be reckoned with for sure, but the comments of the head of the FRC yesterday were very interesting:

Perkins attributed Palin’s underwhelming performance to the fact that she did not speak to the group in person. But he also said it could show that voters see her more as a “cheerleader who rallies conservatives together” than as a potential elected leader.

Palin did, however, place just behind Pence in a second poll for vice presidential preference. Perkins called a potential Pence-Palin pairing a “dream ticket.”

That strikes me as unlikely, both because I doubt Palin would accept second fiddle again, and because a GOP ticket dominated by two social conservatives is hardly the type of ticket the party would want to send into November 2012 if it really wants to defeat Obama.

So, file Mike Pence away as a name to remember, but don’t count on him being a top tier candidate just yet.