David Rittgers, a legal policy analyst at the Cato Institute who served three tours in Afghanistan as a special forces officer, laments the militarization of police in America. 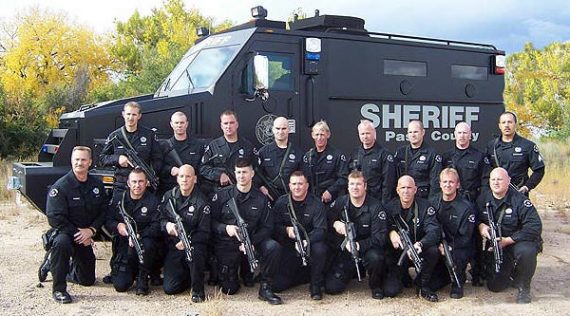 David Rittgers, a legal policy analyst at the Cato Institute who served three tours in Afghanistan as a special forces officer, laments the militarization of police in America.

The sheriff’s office in Pima County, Ariz., raided the home of former Marine and Iraq combat veteran Jose Guerena, shooting 71 rounds at Guerena and hitting him with 22. The department is now facing a serious controversy over Guerena’s death.

Pima County released a video of the raid and supporting documents. The video isn’t anything new — a squad of police officers dressed up for combat. But the statement of the SWAT supervisor is worth reading. After the SWAT team entered Guerena’s home, the supervisor left one or two “operators” with the body while the rest searched the house.

What did he mean by operator? Well, a police officer. But the term connotes something entirely different.

“Operator” is a term of art in the special operations community. Green Berets, SEALs and other special operations personnel often refer to themselves as operators. It’s a recognition of both the elite standards of their units and the hybrid nature of their duties — part soldier, part spy, part diplomat. But importing operator terminology into domestic law enforcement is not a benign turn of the phrase.

Perceiving yourself as an operator plasters over the difference between a law enforcement officer serving a warrant and a commando in a war zone. The former Mirandizes, the latter vaporizes, as the saying goes — and as the recent Osama bin Laden raid vividly illustrated.

Targeted killing is legal in a war zone but not on the streets of Anytown, USA. The war on drugs has done incalculable damage to the character of law enforcement by encouraging police officers to forget they are civilians.

Radley Balko and others have been writing about this problem for years. Sadly, there’s virtually no public appetite to do anything about it.