America's war colleges have some problems but we can't close them. 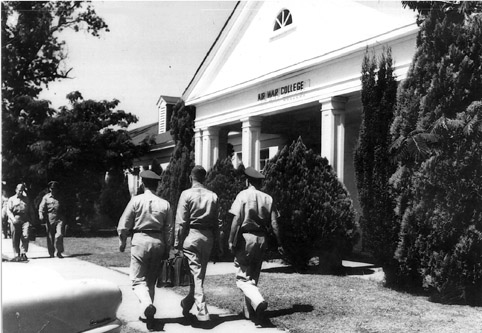 Thomas Ricks has had a series of blog posts over the academic quality and integrity of the Air War College and its parent Air University in Montgomery, Alabama. It was sparked by a book chapter written by disgruntled retired AU professor named Daniel Hughes, which prompted Ricks to argue for closing the college.

I’ve stayed out of the debate until now because I’ve got some interlocking conflicts of interest* that complicate my analysis. But today’s installment, by Dr. Richard B. Andres, a former AU professor now at National Defense University (who I had the pleasure of meeting some months back at a cyberwar conference put on by the Naval War College) makes a series of points I’m comfortable endorsing:

To even begin to understand the issue, it is necessary to recognize that many top tier professors in the fields of political science and history view contact with real world military policy as not only a distraction, but a violation of professional ethics. Young scholars are regularly told by their mentors that research on current political issues could taint them. Publications in journals that deal with current issues do not count toward promotion at top schools, demonstrate a lack of commitment to pure research and can negatively influence tenure decisions. Beyond prizing academic rigor and hoping to avoid contact with policy, academics generally share a common professional mindset that is somewhat left of center, dislikes evangelical Christianity, and views the military with distrust.

When civilian professors arrive at Air University, they are told their job is to help mid-career colonels — who often hold academic, political and religious views diametrically opposed to their own — learn to apply lessons from political science and history to military strategy. The colonels are nominally students but usually already have one or more master’s degrees and often have enormously more life experience than their professors. Worse yet, from the civilian professor’s point of view, the school’s administration and around two-thirds of their fellow faculty are colonels who hold similar views.

A few years ago, the Air Force leadership asked professors at Air University to publish and teach material related to the ongoing wars and potential future uses of force by the military. This request was greeted by some as an intolerable imposition. Despite repeated efforts, by and large, the schools did not inject anything on Afghanistan, Iraq or counterinsurgency into the curriculum until four years into the war, about the duration of U.S. involvement in World War II. Although the mission of the Air Force is to fight in air, space and cyberspace, a 2007 survey of the curriculum at Air War College could find little on any of these subjects. Air University repeatedly received and ignored requests from officers in the field trying to better understand the ongoing wars and complaints from the Army and Navy asking why they should send their officers to an Air Force college that did not teach them about air, space and cyber power.

The record for civilian publications looked similar. Partially as a result of the management problems described by Hughes, faculty at Air University have little incentive or time to publish. Nevertheless, no less than the chief of staff of the Air Force and the Air University Commander repeatedly pleaded with faculty to conduct research on the ongoing wars and other issues related to current and potential uses of force. These requests initially got some traction but then were squelched.

The unfortunate truth is that most top civilian graduate schools in the United States stopped teaching about military matters sometime around the Vietnam War. Educating the hundreds of officers sent for higher education each year requires a substantial pool of professors trained in the arcane field of military strategy. There is no such pool of professors outside the military university system nor are civilian schools likely to create one. With all its flaws, the Air War College does a better job of teaching its students — and educating its faculty — about the application of military force than do its civilian counterparts.

I’m an academic by training but have been on its periphery in recent years. But my bent has always been public policy rather than pure political science, which makes me an outlier.

Anders is right: The war colleges simply have to be hybrid institutions, blending the best cutting edge scholarship with practical training. Each of the services now sends a large number of promising mid-career officers to civilian universities and Washington think tanks (including my own) to broaden their horizons. And that’s great! But the vast number of young colonels and captains need to learn to be strategic thinkers in today’s environment. That means being around really smart scholars who’ve had the luxury of thinking really hard about Iraq, Afghanistan, counterinsurgency, military interventions, and a host of related issues. There just aren’t many institutions in the country with more than one or two of these people on staff.

Now, here’s where my own bias comes in: Anders’ arguments for having most of the faculty at the war colleges consist of active duty officers are well taken. While almost by definition they’re less accomplished scholars than some of their civilian peers–it’s not their chosen career after all–it’s perfectly reasonable to have senior officers training the next generation at these institutions.

But, as Anders notes, Congress stepped in two decades ago and mandated that a certain percentage of the faculty at the various professional military education (PME) schools and the service academies (West Point, Annapolis, and Air Force) be civilian academics. The rationale was obvious: leaven the faculty with professional scholars to move the education-training balance further in the direction of the former while at the same time broadening the perspectives to which students are exposed.

Unfortunately, the “civilians” hired were all too often just-retired colonels, defeating both purposes. And, unlike their active duty counterparts, their legacy value in passing down institutional memory soon becomes rusty, making them valuable only insofar as they become productive scholars.

As a side note, Anders relates stories of civilian faculty members actively sabotaging students they perceived as too religious. That’s just shameful. It’s conduct that wouldn’t be tolerated at an ordinary university, academic disdain for religion or no.

*Essentially, I’ve applied for jobs at various of these institutions, including a particularly bitter experience some 15 years ago at AU; have worked for the Naval Postgraduate School; and have professional relationships with some really outstanding scholars across the professional military education spectrum.