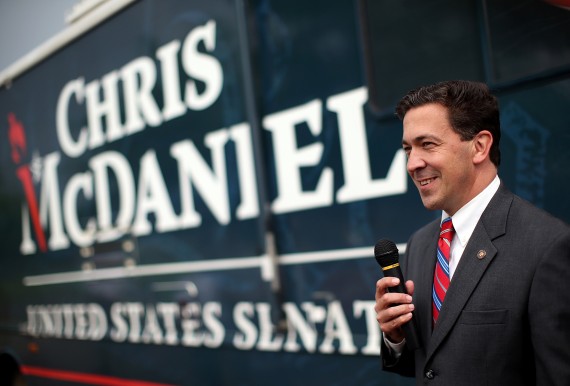 It was only Monday that Chris McDaniel filed his challenge to the outcome of the Mississippi Senate Primary with the state’s Republican Party, but the party has already decided that it doesn’t want to hear the challenge:

State GOP Chairman Joe Nosef suggested in a letter to McDaniel attorney Mitch Tyner that the candidate move his challenge to the courts. Nosef explained that he would not be able to convene a meeting of the executive committee, citing a law that requires a petition for judicial review to be filed 10 days after a complaint reaches the state party’s executive committee.

McDaniel formally announced Monday that he would file the challenge with the executive committee. The deadline for the challenge, per state law, would then be Aug. 14.

“Therefore, if we sent notice of a meeting today (even before most committee members have even been able to receive all of the evidence), the earliest we could have a meeting would be Aug. 13, 2014,” he wrote in the letter, as quoted by the Clarion-Ledger.

Nosef went on to explain that a court challenge would be fairer to the McDaniel campaign.

“Obviously it is not possible for our committee of 52 volunteers to attempt to engage in such an exercise in a prudent manner in one day,” he wrote in the letter. “In fact, given the extraordinary relief requested of overturning a United States Senate primary in which over 360,000 Mississippians cast votes, the only way to ensure the integrity of the election process and provide a prudent review of this matter is in a court of law.”

Tyner, the McDaniel attorney, said that the state senator was “disappointed” to have his challenge declined by the state party executive committee.

According to those with knowledge of the matter, this isn’t entirely unexpected. The State Committee is largely controlled by people loyal to Cochran and Haley Barbour, who was a strong backer of Cochran’s during the primary battle, and McDaniel’s evidence was so flimsy that it was unlikely that they would have come anywhere close to overturning the election results. Had McDaniel lost, he would have appealed the matter to Mississppi’s court’s in any case, so this basically just avoids the needless task of presenting the matter to the party’s Central Committee and sends it right to the courts.

McDaniel’s chances in Court don’t appear to be any better than they would have been before the committee members, though, as Rick Hasen noted in his analysis of McDaniel’s original complaint earlier this week:

[T]he reason I expect McDaniel will likely lose is that he is not asking for a new election. Instead, he is asking for a remedy of having him declared the winner. He would apparently rely upon polling to show that Democrats who voted in the primary did not intend to vote for the eventual Republican nominee in the fall. This relies upon a MS code provision saying that only those who will support the nominee in the general election can vote in the primary.

Second, even if McDaniel’s legal interpretation were correct and the claim not barred by laches, polling evidence is likely not good enough to show that there were more votes for Cochran.

Finally, as to a remedy, what McDaniel must be asking for is a “proportional reduction” of votes based upon such polling, which would subtract more votes from Cochran than McDaniel. That remedy was strongly rejected in the contested Washington state governor’s race between Rossi and Gregoire, and I don’t expect a court would accept that here to declare the loser the winner.

In short, it is hard enough to get a court to declare a new election after ballot irregularities. To get the court do declare the loser the winner is a remedy which almost never happens absent strong proof of fraud on the winner’s side.

Hasan goes on to note that the best that McDaniel could hope to get a court to do would be to order a new election, and that’s only if one takes all of his evidence in the most favorable light. As I noted on Monday, though, a good part of McDaniel’s argument relies upon a “loyalty oath” provision that is clearly unconstitutional and, in any case, completely unenforceable. Additionally, to the extent he is making an illegal crossover votes argument — meaning people who voted in the Democratic primary in early June and then the Republican runoff on June 24, which is not allowed under the law — the evidence there is slim to say the very best and likely does not consist of sufficient votes to actually overturn the election results. For example, yesterday Hasen noted that at least 3,500 of the 5,000 “crossover votes” that McDaniel’s complaint cites are actually Republican voters, which means that they didn’t vote improperly at all. If that’s the case, then there clearly isn’t any basis for his claim that these supposedly illegal votes had any impact at all on the outcome of the election. Given this, it doesn’t seem as though McDaniel will have any more success in the courts than he would have had before the committee.

Assuming McDaniel does indeed file his lawsuit, the next step would be for the Mississippi Supreme Court to appoint a judge to hear the case. While I can’t say I’m up to date on the election laws in the Magnolia State, I would assume that any trial would happen on an expedited basis given the fact that we’re less than three months away from the General Election. In the end, though, the outcome, and Thad Cochran’s place on the ballot, seems to be pretty certain.