If Republicans win the Senate, what we've seen for the past three years could end up seeming tame by comparison. 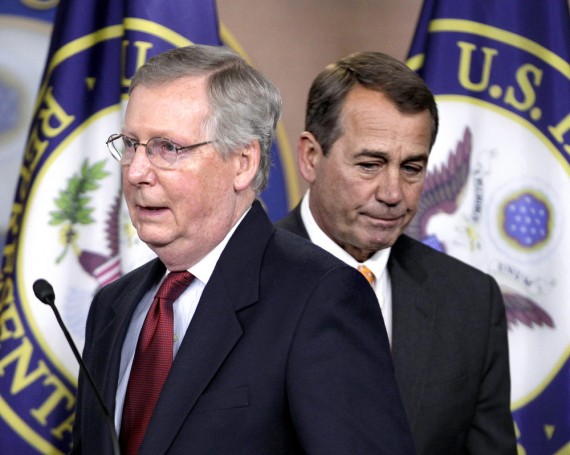 If there’s one thing that has epitomized the relationship between the White House and the Republican controlled House over the past three and a half years, it has been the extent to which showdown politics has become a regular part of governing in Washington. Less than six months after the GOP took control of the lower chamber of Congress, Washington was gripped by a showdown over the budget and the extension of the debt ceiling that lasted right up until the last minute and resulted in a deal that nobody really liked, but which supposedly would never really be implemented because of the “Super Committee” that would solve all our budget problems. When that Super Committee failed, we ended up with budget cuts that nobody really liked and which ended up being the catalyst for further showdowns. We also saw showdowns over the extension of the Bush Tax Cuts, the end of Don’t Ask Don’t Tell, and pretty much every high profile nomination requiring Senate confirmation. Most famously, of course, the showdown strategy resulted last year in a sixteen day long government shutdown that only seemed to happen because the GOP Leadership was out manuvered by a Tea Party that had decided that shutting down the government would be a good idea when every indication was saying otherwise.

As we approach the 2014 midterms with the prospect of the GOP winning control of the Senate well within the realm of possibility, speculation is naturally turning to what the GOP would do with its Senate majority during the last two years of the Obama Presidency.  In a new Politico interview, Senate Minority Leader Mitch McConnell seems to be promising more showdowns, and perhaps even another shutdown:

In an extensive interview here, the typically reserved McConnell laid out his clearest thinking yet of how he would lead the Senate if Republicans gain control of the chamber. The emerging strategy: Attach riders to spending bills that would limit Obama policies on everything from the environment to health care, consider using an arcane budget tactic to circumvent Democratic filibusters and force the president to “move to the center” if he wants to get any new legislation through Congress.

In short, it’s a recipe for a confrontational end to the Obama presidency.

“We’re going to pass spending bills, and they’re going to have a lot of restrictions on the activities of the bureaucracy,” McConnell said in an interview aboard his campaign bus traveling through Western Kentucky coal country. “That’s something he won’t like, but that will be done. I guarantee it.”

McConnell is facing one of the toughest reelection battles of his three-decade Senate career. But Republicans are tantalizingly close to winning majorities in both houses of Congress for the first time in nearly a decade, and McConnell is making an aggressive pitch to voters here that they have the chance to pick the Senate’s next majority leader.

But there are clear risks for McConnell. First, he must defeat a spirited Democratic challenger in November, while hoping that the class of Senate candidates he helped recruit doesn’t blow the GOP’s best chance in years to retake the majority. And, perhaps just as challenging, McConnell would need to bring unity to a party that is struggling to overcome divisions between establishment stalwarts like himself and young GOP upstarts pushing for conservative purity.

One of the Senate’s leading GOP firebrands — Ted Cruz of Texas — isn’t committing to supporting McConnell as majority leader, signaling the challenges that could lie ahead.

“That will be a decision for the conference to make,” Cruz said in an interview, after pausing eight seconds, when asked if he’d back McConnell as majority leader. “I’m hopeful come January we have a Republican majority.”

Meanwhile, McConnell risks overreaching if he follows through with his pledge to attach policy riders to spending bills. If Obama refuses to accept such measures, a government shutdown could ensue. Republicans bore much of the blame for last year’s government shutdown, which was prompted by conservative tactics McConnell opposed, and their fortunes rebounded only when the administration bungled the rollout of Obamacare.

But asked about the potential that his approach could spark another shutdown, McConnell said it would be up to the president to decide whether to veto spending bills that would keep the government open.

Obama “needs to be challenged, and the best way to do that is through the funding process,” McConnell said. “He would have to make a decision on a given bill, whether there’s more in it that he likes than dislikes.”

None of this should come as a surprise, of course. Nobody expects that the GOP would suddenly decide to cooperate with the President on issues like immigration reform, or the budget, or anything else, if they gained control of the Senate. This is especially true given the fact that the beginning of the 114th Congress will coincide with the effective beginning of the 2016 Presidential election process. Both parties in Washington are going to be far more interested in using their time in Washington to shape the agenda for the upcoming election than actually getting anything done, and this will be especially true for a GOP seeking to gain back the White House after eight years of Democratic control. Additionally, political rhetoric like this is obviously something that will appeal to the base voters that Republicans want to get to the polls in November. From that perspective, then, making a promise like this does make some political sense for McConnell.

At the same time, though, I have to wonder if the GOP would actually be helping itself if it followed a strategy like this assuming that it does win the Senate in November. Polling in recent years has shown fairly consistently that the public has a very low opinion of Congress in general, and that one of the main reasons for that is the perception that members are unable to get anything done because they are pursuing partisan agendas rather than actually trying to solve problems. If Republicans spend the two years between 2014 and the Presidential election engaging in exactly that kind of strategy, then they face the prospect of turning voters off even more to the point that it does real harm to whomever ends up being the party’s nominee in 2016. Given the fact that the GOP is already facing the prospect of real Electoral College problems based on the results of Presidential elections going as far back as 1992, the prospect of annoying the voters that they need to attract in states like Virginia, Florida, and Ohio ought to concern them.

Republicans don’t see things this way, of course, and the McConnell strategy outlined in this interview is therefore likely to appeal to them. They believe that if they engage in the kind of strategy that McConnell talks about here by attaching controversial policy issues to budget bills and forcing the President to veto them, they will end up gaining support among the public.  On some of these issues, such as the Keystone XL Pipeline, they are correct to point out that the public does seem to support the GOP position. Additionally, the fact that the President’s job approval is quite low and unlikely to get any better over the next two years would seem to argue that picking fights with him over issues like this isn’t necessarily political risky.  Nonetheless, given three years worth of polling showing that the public isn’t exactly thrilled by the kind of delay and gridlock that McConnell seems to be promising, I’m not sure that this kind of legislative strategy is in the GOP’s long term interests.