More British Troops At The Olympics Than In Afghanistan 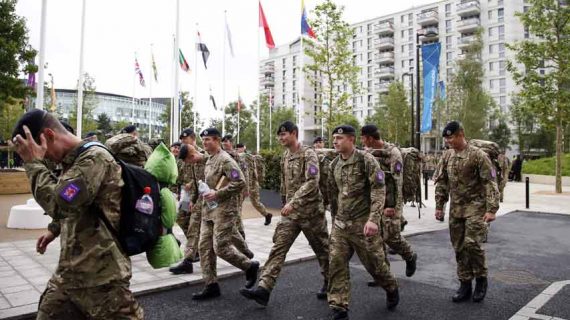 Thanks in large part to failures by the security company hired by the London Organizing Committee, there are now more British troops deployed to provide security for the Olympics than there are in Afghanistan:

The Summer Olympic Games in London kick off today with the opening ceremony extravaganza, march of athletes, lighting of the flame and security and surveillance so pervasive it would make Britain’s great prophet of dystopia, George Orwell, cringe in fearful recognition.

Great Britain, with its own home-grown Petri dish of Islamic radicalism and history of terrorist incidents, is taking no chances. Forty years after the terrorist attack at the Olympics in Munich, the rule is: better stiflingly safe than sorry. As a result, London has become a virtual police state with security cameras scanning a vast area of the city, many streets closed and thousands of security personnel on guard monitoring each wayward tourist to see if suicide bombs are strapped underneath some of those souvenir T-shirts.

Tuesday, when the security contractor responsible for providing guards for the Games admitted it failed to train enough rent-a-cops, the British government called up an additional 1,200 troops. That has brought the total number of British soldiers on duty at the Olympics to 18,200. That deployment is nearly twice the size of the British military contingent stationed in Afghanistan, where 9,500 do battle with the Taliban.

As the article goes on to note, in all likelihood most of these troops will likely spend their time giving directions to confused tourists, but with the security contractor having failed miserably to live up to its obligations they really have no other option but to go with the “better safe than sorry” approach. Nonetheless, more than one reporter has observed the extent to which Olympic venues have taken on a distinctly military look:

I have to say, having spent time out at Olympic Park, that it’s a little bit of a disappointment in a certain sense. It’s a rather cheerless place. If you see it from the air, as you and I have done, it looks very pleasant, that you can see that it’s a park. On the ground, because of security, it’s become a kind of, well, one of my colleagues said it was a kind of Gitmo experience, meaning Guantanamo. Security is very tight indeed, as you would expect. There’s a lot of wire mesh fencing to channel you around, there are concrete blocks, actually, a kind of environment that I’m very familiar with from the American military bases in Iraq and Afghanistan. Now you know, the Games haven’t started yet. So you don’t have the kind of enthusiasm that we expect to see with all the people there, the athletes, all the excitement of the Games. And that may very well change. But if you’re looking for beauty, I would say the London Olympic Park is not the place to go for it. There are places in London that are a great deal more appealing than that.

In addition to that they’ve placed surface-to-air missile batteries around London, and the airspace above the city has been declared a no-fly zone. Overkill? Perhaps. Let’s just hope it’s successful in deterring terrorists.