Most Americans Want Dreamers To Have Pathway To Citizenship 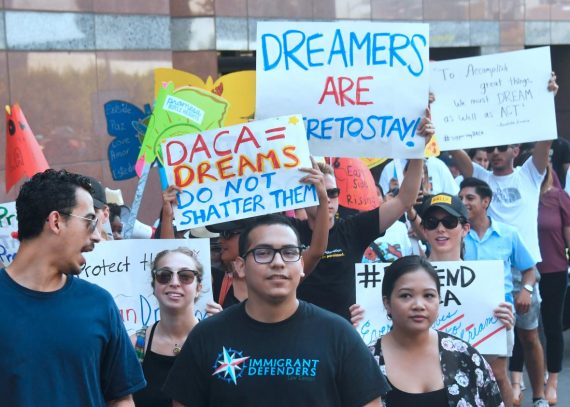 A new Politico/Morning Consult poll finds majority support for the idea of allowing so-called “Dreamers” — generally defined as people brought to the United States by their parents illegally when they were children — to be able to obtain legal status and eventually citizenship:

A majority of voters want Congress to pass legislation that allows undocumented immigrants brought to the U.S. as children to become citizens if they meet certain requirements, according to a new POLITICO/Morning Consult poll conducted following the Trump administration’s decision to wind down the program protecting these so-called Dreamers from deportation.

The poll — conducted in the days after Attorney General Jeff Sessions announced that the administration was ending the Deferred Action for Childhood Arrivals program, which Sessions described as “unilateral executive amnesty” that “contributed to a surge of unaccompanied minors on the southern border” and “denied jobs to hundreds of thousands of Americans” — shows that 54 percent of voters want Congress to establish a path to citizenship for DACA recipients, and another 19 percent want Congress to allow them to stay without establishing citizenship.

“Not only do a majority, 73 percent, of voters want legislation protecting Dreamers from deportation, a majority want Congress to make that a priority,” said Kyle Dropp, Morning Consult’s co-founder and chief research officer. “Overall, 65 percent of voters say protecting Dreamers should be either an important or top priority for Congress.”

Just 35 percent say ending the DACA program was the right thing to do — fewer than the 45 percent who say it was the wrong thing to do. Two-in-10 voters are not sure.

“Not only do a majority, 73 percent, of voters want legislation protecting Dreamers from deportation, a majority want Congress to make that a priority,” said Kyle Dropp, Morning Consult’s co-founder and chief research officer. “Overall, 65 percent of voters say protecting Dreamers should be either an important or top priority for Congress.”

Just 35 percent say ending the DACA program was the right thing to do — fewer than the 45 percent who say it was the wrong thing to do. Two-in-10 voters are not sure.

Even if voters, on the whole, want Congress to protect these immigrants from deportation, they don’t have much faith in the legislative branch to act. Only 17 percent say they are very confident Congress will pass such a measure in the next six months, with another 23 percent saying they are somewhat confident. But more voters are either not too confident (29 percent) or not confident at all (14 percent) Congress will be able to act in the next six months to protect them from deportation.

More voters now trust Democrats in Congress to handle immigration, 40 percent, than the 38 percent who trust Republicans. That is within the poll’s margin of sampling error of plus or minus 2 percentage points, though it’s the first time since the POLITICO/Morning Consult poll began asking the question earlier this year that Democrats have led on it.

Looking deeper into the poll, we also find that 45% of voters say that President Trump’s decision to end the Deferred Action For Childhood Arrivals (DACA) program was the right thing to do and that only 35% think it was the right thing to do. This view is generally universally held across nearly all demographic groups, including Independent voters (30% “right thing” v. 46% “wrong thing”), with the exception of self-identified Republicans (57% “right thing” v. 24% “wrong thing”), self-identified conservatives (57% “right thing v. 23% “wrong thing”), and Trump voters (62% “right thing” v. 19% “wrong thing). Additionally, 73% of voters favor Congressional action of some kind that would allow Dreamers to stay in the United States, with the majority supporting legislation that would allow them to pursue citizenship at some point. This is also generally universally held, and even a majority of Republicans (51%) and Conservatives (50%) favor the citizenship option as opposed to a bill that would limit Dreamers to obtaining legal resident status. Support for a path to citizenship is also strong among Tea Party supporters (45%) and Trump voters (41%). These numbers are largely consistent with polls that were released last week after the Trump Administration announced that the DACA program would be ended in six months absent Congressional action. Those polls also found majority

As I said in reporting on last week’s polls, it’s possible that numbers like this, along with a sufficiently active political movement, could actually result in Congress taking a step toward immigration reform by passing something resembling the DREAM Act. The bill was first proposed as far back as 2001 as a bipartisan piece of legislation that included support from Republicans such as Orrin Hatch, Chuck Hagel, Richard Lugar, and other Republicans, many of whom are no longer in Congress due to retirement or defeat in a primary or General Election. While that bill failed, the bill was revived as part of the effort to enact comprehensive immigration reform during George W. Bush’s second term, an effort that ultimately proved futile thanks largely to backlash from the base of the Republican Party. In the intervening years, a version of the bill was put forward in both the House and the Senate several times but failed to make it to the floor for a vote until the lame duck session that took place in the wake of the 2010 elections. That bill passed the House but failed to gain sufficient support in the Senate during the lame duck session after the 2010 election, though, due to a Republican filibuster. This was the last major legislative push for the act and was a major part of the President Obama’s decision to use his authority as President to provide relief to this group of immigrants. Now, Trump’s decision to end the program has brought us to the point we are now where the ball is back in Congress’s court.

Shortly after the Trump Administration announced the end of the program, a group of Senators led by Republican Lindsey Graham and Dick Durbin, the No. 2 Democrat in the Senate, proposed a bill that is essentially a resurrection of the DREAM Act. The bill would make DACA permanent and appears to actually expand the number of people entitled to protection from deportation. Additionally, there’s been some suggestion that a deal could be made that would allow some level of initial funding in exchange for making DACA permanent. While I was initially skeptical about the chances that something DACA related could pass Congress, there are signs that the winds may be shifting and we could see positive action on this matter in the relatively near future. For one thing, poll numbers like this show that there’s little political risk even for Republicans who support relief for DACA beneficiaries, and this could cause Republicans who are sitting on the fence to back a bill they might have otherwise been skeptical of under other circumstances. Additionally, the fact that the budget and debt ceiling have been kicked down the road thanks to Trump’s deal with Democrats means that there is still legislative time left in September for Congress to act. Of course, it’s likely that passage of any such bill would require Republican leaders in both the House and Senate to live with the idea that they’d have to rely on Democrats to push the bill over the top and buck the headwinds coming from their own caucuses and from outside groups that would oppose the bill despite overwhelming public support. Whether that will happen remains to be seen.