A version of a piece I wrote Wednesday, titled "NATO's Death Greatly Exaggerated," has finally been published at Foreign Policy under the title "Back in the Saddle: How Libya Helped NATO Get Its Groove Back." 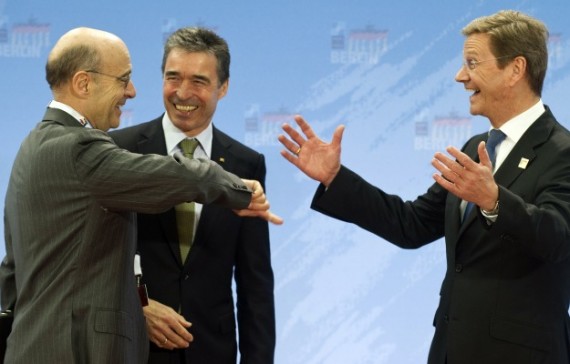 A version of a piece I wrote Wednesday, titled “NATO’s Death Greatly Exaggerated,” has finally been published at Foreign Policy under the title “Back in the Saddle: How Libya Helped NATO Get Its Groove Back.” The opener:

NATO’s operations in Libya got off to a rocky start. Although the venerable treaty organization’s member countries — principally Britain, France, and the United States — were dropping bombs on Muammar al-Qaddafi’s military as soon as the ink was dry on the March 17 U.N. Security Council resolution authorizing a no-fly zone over Libya, as of late March the allies still couldn’t agree on whether NATO itself should lead the mission. Turkey, opposed to intervention, insisted on the alliance acting unanimously, which was to say, not acting at all; hawkish France opposed NATO leadership, fearing less-enthusiastic countries would muck up the ad hoc coalition’s campaign. Weeks later, confusion still persists, with heads of member states issuing conflicting statements and military leaders contradicting their civilian bosses.

These hiccups have spawned the inevitable prophecies of doom for the alliance. “Will the Libya intervention bring the end of NATO?” asks the headline on a column by Anne Applebaum in the Washington Post this week. Other interested parties in the Libyan conflict, meanwhile, have engaged in no end of backseat driving over the alliance’s performance. The Arab League, whose call for action in Libya was a crucial catalyst for spurring intervention, denounced NATO for being too aggressive once the action began. The anti-Qaddafi rebels bitterly complained the alliance wasn’t doing enough.

These dire predictions are nothing new — they’ve greeted every NATO operation over the past several decades. NATO’s critics were wrong then, and they’re wrong now. Indeed, the case for the alliance is stronger than it has been since the collapse of the Soviet Union.