The new leader of the Senate's Democrats says he regrets supporting the filibuster reforms his party passed in 2013. 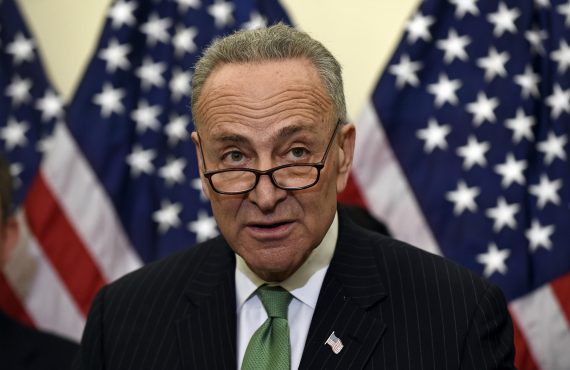 Senator Chuck Schumer, who is spending his first day on the job as Senate Minority Leader now that Harry Reid has retired, says he’s come to regret the Democrats’ decision to use its Senate majority in late 2013 to repeal the filibuster for Executive Branch and Judicial nominations below the Supreme Court:

Sen. Chuck Schumer lamented Tuesday the Democrats’ move to diminish the number of senators needed to confirm Cabinet picks from 60 votes to 51, because the new rule now hurts his party.

“I argued against it at the time. I said both for Supreme Court and in Cabinet should be 60 because on such important positions there should be some degree of bipartisanship,” Schumer, a New York Democrat and the incoming Senate minority leader, told CNN’s Dana Bash. “I won on Supreme Court, lost on Cabinet. But it’s what we have to live with now.”

In 2013, then-Senate Majority Leader Harry Reid and other top Democrats became convinced GOP delaying tactics were crippling Washington. They triggered the so-called “nuclear option” which — over the objections of Republicans — lowered the threshold to overcome a filibuster from 60 to 51 votes.

Schumer’s remarks come at the same time that many Senate Democrats, and Democrats outside the Senate, have expressed reservations about several of President-Elect Donald Trump’s nominees for Cabinet positions. Earlier this week, it was reported that Senate Democrats plan to “target” eight of those nominees due either to their records outside government or the views they have expressed. Most notable among that group of eight are picks such as Rex Tillerson, Trump’s choice for Secretary of State, Jeff Sessions, who has been selected to become Attorney General, and Tom Price, a long-time critic of the Affordable Care Act who has been selected to become Secretary of the Department of Health and Human Services. We can expect to see tough questioning of these nominees before the respective committees handling their nominations over the next three weeks, and vigorous debate over their nominations on the Senate floor. However, when it comes time for a vote the Democrats will have no options available to them thanks to the fact that the changes that Democrats adopted in November 2013 effectively ended the filibuster for nominees to all Executive Branch positions, as well as Judicial appointments below the Supreme Court, certain military promotions, and Ambassadorships. This means that, barring some kind of unlikely scandal that uncovers information about a nominee that is more than just a minor embarrassment, all of Trump’s Cabinet and other Executive Branch appointments will be confirmed relatively easily.

Schumer’s regrets are one reason why complete repeal of the filibuster, or indeed any change beyond what the Democrats accomplished in November 2013, is unlikely. While the rule is a inconvenience for a party that is in power at any given time, and often a major one, there is enough institutional memory in the Senate, and control has changed often enough in recent years, that member are well aware of what the consequences of complete repeal would be. Effectively, complete repeal of the filibuster would mean would turn the Senate into a smaller version of the House of Representatives, which it clearly was not intended to be. Instead, the Senate was intended to be something of a check and balance against the popular will as manifested in the House of Representatives. This is one of the reasons why, in the original plan under the Consitution, Senators were selected by the state legislatures rather than via popular vote. It was believed at the time that selecting Senators in this manner would mean that the body would be a more deliberative body that would serve as a method for cooling off the passions of a House of Representatives more likely to reflect the passions of populism due to the fact that its members were directly elected by the people. While the method of selecting Senators changed with the ratification of the 17th Amendment, the Senate’s role as a check against popular will did not and protections for the minority such as the filibuster help to emphasize that role. Additionally, the filibuster exists in no small part due to the fact that the majority maintains tight control over the agenda of the body and that, without the filibuster, minority members would have virtually no voice despite the fact that they may represent a significant portion of the population of the nation. Finally, as I’ve noted in the past, changes in control of the Senate have been frequent enough, and turn around is low enough, that members who are now in the majority remember what being in the minority was like and vice versa. That’s one reason why it took nearly four years for Harry Reid to take the steps he did in November 2013 and why they were limited to very specific circumstances. Anything more likely would not have gotten a majority of Democratic votes, and as it was even the modest reforms he put on the table back then. As it was, the reforms that did pass saw three defections by long-serving Democrats who advised against filibuster reform due to the fact that it would hamper the party’s ability to act when it inevitably returned to the minority. Now that this has happened, and especially in an era with a Republican Congress and Republican President, the Senators who voted for that reform are living to see the consequences.