Another legal setback for Mayor Michael Bloomberg's crusade to regulate what New York City residents can eat and drink. 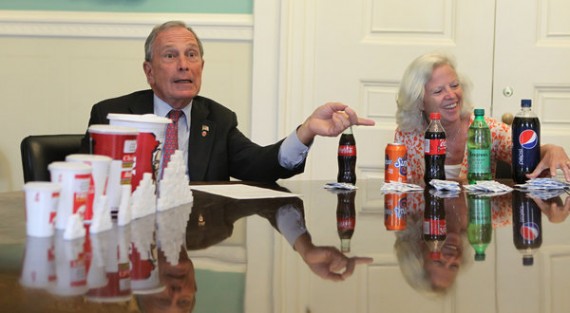 Upholding an opinion issued in March by a trial court judge, an intermediate appellate court in New York has ruled that the ban on large-sized sugary drinks enacted last year by the New York City Department of Health is unconstitutional:

NEW YORK — New York City Mayor Michael Bloomberg’s controversial plan to keep large sugary drinks out of restaurants and other eateries was rejected by a state appeals court on Tuesday, which said he had overstepped his authority in trying to impose the ban.

The law, which would have prohibited those businesses from selling sodas and other sugary beverages larger than 16 ounces (473 ml), “violated the state principle of separation of powers,” the First Department of the state Supreme Court’s Appellate Division said.

The decision, upholding a lower court ruling in March that struck down the law, dealt a blow to Bloomberg’s attempt to advance the pioneering regulation as a way to combat obesity. Beverage makers and business groups, however, challenged it in court, arguing that the mayoral-appointed health board had gone too far when it approved the law.

A unanimous four-judge panel at the appeals court agreed, finding that the board had stepped beyond its power to regulate public health and usurped the policy-making role of the legislature.

In particular, the court focused on the law’s loopholes, which exempted businesses not under the auspices of the city’s health department and left certain drinks, such as milk-based beverages, unaffected.

As a result, grocery and convenience stores – such as 7 Eleven and its 64-ounce Big Gulp – were protected from the ban’s reach, even as restaurants, sandwich shops and movie theaters were not. Meanwhile, milkshakes and high-calorie coffee drinks like Starbucks’ Frappucinos would have remained unfettered.

“The exceptions did not … reflect the agency’s charge to protect public health but instead reflected the agency’s own policy decisions regarding balancing the relative importance of protecting public health with ensuring the economic viability of certain industries,” Justice Dianne Renwick wrote for the court.

In a statement, Bloomberg said the decision was a “temporary setback” and vowed to appeal to the state’s highest court, the Court of Appeals. If the court declines to hear the city’s appeal, the case would come to an end.

Bloomberg also said that more than 2,000 New Yorkers had died from diabetes since March 12, when the law was struck down just one day before it was to take effect.

The proposed ban, the first of its kind, drew national attention, as public health advocates praised the plan while critics decried Bloomberg for trying to create a “nanny state.”

A spokesman for the American Beverage Association, an industry group that served as the lead plaintiff in challenging the law, said, “With this ruling behind us, we look forward to collaborating with city leaders on solutions that will have a meaningful and lasting impact on the people of New York City.”

The grounds for the appellate court’s decision are largely the same as those adopted by the trial court judge, namely that the law was replete with some many exceptions and exemptions that it clearly wasn’t rationally related to the supposed goal of the rule adopted by the Department of Health. More importantly, though, the Court found that the Department of Health had inappropriate overstepped its authority on an issue that the legislature, either at the state or local level, had attempted to deal with in the path without being able to come to an agreement:

[S]ince a basic premise of the ban is that New Yorkers consume excessive quantities of sugary drinks, the Board’s decision to regulate only these drinks requires that any health concerns be weighed against consumer preferences for such drinks. Instead of offering information and letting the consumer decide, the Board’s decision effectively relies upon the behavioral economics concept that consumers are pushed into better behavior when certain choices are made less convenient. For instance, the regulation makes the choice to drink soda more expensive, as it costs more to buy two 16-ounce drinks than to buy one 32-ounce drink. As a result, the Board necessarily concluded, as a threshold matter, that health concerns outweigh the cost of infringing on individual rights to purchase a product that the Board has never categorized as inherently dangerous. As the intense public debate on the ban bears out, this threshold  decision to regulate a particular food is inherently a policydecision.5 Such decision necessarily reflects a balance between health concerns, an individual consumer’s choice of diet, and business financial interests in providing the targeted sugary drinks. In this context, the “Soda Ban” is one especially suited for legislative determination as it involves “difficult social problems,” which must be resolved by “making choices among competing ends” (Boreali, 71 NY2d at 13).

With regard to the exemption of certain FSE’s (i.e., grocery markets, 7-11s, bodegas, etc.), the DOHMH does not deny that the exemption has no relationship to health-related concerns. Still, the agency argues that it was not based on impermissible reasons, but on the agency’s allegedly reasonable view that such FSEs cannot be regulated by the Agency under the MOU signed with the state’s Department of Agriculture. However, the Board’s claim that the MOU tied its hands is belied by the fact that the agency has previously used its regulatory authority to promulgate citywide health rules that regulate all FSEs (see e.g. 24 RCNY Health Code 181.07) [city-wide regulation of common eating and drinking utensils]; 24 RCNY Health Code 71.05) [city-wide prohibition on the sale of “any food . . . which is adulterated or misbranded”]). Moreover, the MOU envisions “cooperative efforts between the two agencies [to] assure comprehensive food protection” and to avoid gaps in food surveillance.” Yet, the agency offers no evidence of any prior attempt to coordinate with the Department of Agriculture on the Portion Cap Rule. The failure to obtain such expansion resulted in a ban that includes exceptions which necessarily favor some businesses and products at the expenses of others

Accordingly, the selective restrictions enacted by the Board of Health reveal that the health of the residents of New York City was not its sole concern. If it were, the “Soda Ban” would apply to all public and private enterprises in New York City. By enacting a compromise measure — one that tempered its strong health concerns with its unstated but real worries about commercial well-being, as well as political considerations — the Board necessarily took into account its own non-health policy considerations. Judged by its deeds rather than by its explanations, the Board of Health’s jurisdictional rationale evaporates.

In sum, we find that under the principles set forth in -Boreali, the Board of Health overstepped the boundaries of its lawfu-lly delegated authority when it promulgated the Portion Cap Rule to curtail the consumption of soda drinks. It therefore violated the state principle of separation of powers. In light of the above, we need not reach petitioners’ argument that the subject regulation was arbitrary and capricious.

Before concluding, we must emphasize that nothing in this decision is intended to circumscribe DOHMH’s legitimate powers.  Nor is this decision intended to express an opinion on the wisdom of the soda consumption restrictions, provided that they are enacted by the government body with the authority to do so. Within the limits described above, health authorities may make rules and regulations for the protection of the public health and have great latitude and discretion in performing their duty to safeguard the public health.

In many ways, the Court’s decision was a pretty sharp smackdown of Mayor Bloomberg’s efforts to use the Department of Health to accomplish what he was unable to get through the City Council, and which the New York State Legislature has similarly been unwilling to take up. As the Court said, if the legislature were to speak to this it would most likely be an appropriate  exercise of their general police powers. The same action by a bunch of unelected bureaucrats essentially doing the bidding of a Mayor with delusions of grandeur is an entirely different matter.

This matter could be appeal to the Court of Appeals, the highest court in New York State. However,  given the Appellate Division’s analysis here, it’s hard to see how the outcome would be any different.’

Soda Sales to Schools to End