Newt Gingrich is very popular among young conservatives. But two ugly divorces will keep him from being a contender for the presidency. 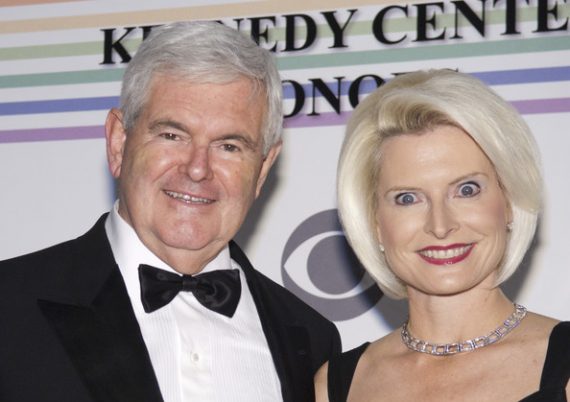 She notes that the leader of the so-called Republican Revolution of 1994 and former House Speaker is not only making the rounds and hinting at a run for the presidency, but polls very high. But Gingrich carries some rather serious baggage. Lawrence notes Gingrich’s weekend speech at CPAC:

Gingrich was Gingrich: hurling colorful insults at Obama, Democrats and their policies, flinging out ideas that included replacing the Environmental Protection Agency with an Environmental Solutions Agency and proposing that Obama receive an invitation to be CPAC’s keynote speaker next year – if he meets certain conditions like signing a repeal of his signature health care law.

That led my colleague David Corn to tweet: “Calls on Obama to sign a repeal of #HCR. That’s like calling on Newt to remarry wife No. 1.” Just the type of joke that would dog Gingrich in a presidential campaign.

Gingrich’s first wife was his high school math teacher, seven years his senior. Making an indelible contribution to his life story, she said he wanted to discuss divorce terms with her while she was in the hospital recovering from cancer surgery. Later, as GOP-driven impeachment proceedings stemming from the Monica Lewinsky affair unfolded against President Bill Clinton, came the news that Gingrich – then married to his second wife — was having an affair with a much younger aide. The aide, Callista Bisek, became his third wife. He later admitted he had cheated on both his first and second wives, and apologized.

On the assumption that Gingrich is interested not just in commerce but in winning the White House, here’s one thing I noticed: Onstage at CPAC, Gingrich made a very quick passing reference to Callista in the course of thanking the activist who introduced him. Other wives were featured more prominently. Former Massachusetts Gov. Mitt Romney’s wife, Ann, gave a short speech to introduce her husband. Sen. John Thune of South Dakota introduced his wife in the audience and had her stand up to be applauded. “It’s always important to remember to introduce the really important person in your life,” he said.

Would it be projecting overly much to wonder how many women would have recalled Gingrich’s past (with irritation) if he had introduced his young, trim, ice-blonde, perfectly groomed wife? One Republican activist told me his wife would leave him if he worked for Gingrich. The website for the Christian conservative group Concerned Women for America recently featured a story headlined “Steal a spouse, pay the piper: South Dakota lawmakers vote to keep alienation of affection law.”

Even if they do, that’s heavy baggage to carry into a presidential campaign, especially given the ground Gingrich would have to make up with voters outside the GOP fold. The Quinnipiac poll found that overall, counting people in both parties, 3 in 10 had a favorable view of Gingrich while more than 4 in 10 had an unfavorable view.

It’s hard to know how much of that is due to Gingrich’s pugnacious partisan persona, and how much to his personal life. But there is one sure thing: The Republican who wins the nomination will be up against a president who is often praised as a devoted husband and father, and who will celebrate his 20th wedding anniversary a month before the 2012 election.

Gingrich is many things but a dummy isn’t one of them. He’s painfully aware of his shortcomings as a presidential contender. And this isn’t just conjecture: Tony Blankley, Gingrich’s friend and longtime press secretary, told me as much a few years back.

Unless Gingrich truly believes time heals all wounds, he’s keeping the possibility of a run for the White House open because it keeps him relevant. It’s been a long time since 1994, after all. And he’s got books and videos to sell.