The two-time Pulitzer winner is considering a career change.

The hyper-local Willamette Week has reported and the New York Times columnist has confirmed that he is considering a run for chief executive of the Beaver State, where he grew up but hasn’t lived in four decades.

Nicholas Kristof, the two-time Pulitzer-winning columnist for The New York Times, is considering a run for Oregon governor.

In recent days, a poll includes Kristof’s name and asks voters how they would feel about a journalist who grew up on a farm running for office. The poll also includes other Democratic hopefuls. Kristof was raised on a sheep and cherry farm in Yamhill County, about an hour southwest of Portland.

Contacted about the poll, Kristof says his friends are attempting to recruit him. “I have friends trying to convince me that here in Oregon, we need new leadership from outside the broken political system,” he tells WW. ”I’m honestly interested in what my fellow Oregonians have to say about that.” “All I know for sure is that we need someone with leadership and vision so that folks from all over the state can come together to get us back on track,” he adds.

Now, Kristoff seems like a decent guy and he’s bright and accomplished.

Kristof, 62, who attended Harvard and was a Rhodes scholar at Oxford, is perhaps best known for his columns on international human rights abuses, including sex trafficking, sweat shops and child marriage. He won an international reporting Pulitzer in 1990 (along with his his wife, Sheryl WuDunn) for covering the Tiananmen Square protests in China, then another Pulitzer for commentary in 2006 for columns on genocide in Darfur.

Still, that hardly seems like preparation to run a state where he hasn’t lived since childhood. But perhaps we should have seen this coming:

[L]ast year, he and WuDunn authored a book, Tightrope, on the failures of the American dream, focusing in part on the stories of childhood friends from Yamhill County, many of whom fell into poverty and drug addiction.

WW published an excerpt from Tightrope early in 2020. In an interview with WW then, Kristof said both political parties had abandoned the working class to despair and early deaths. “This is not just a Trump problem or just a Republican problem,” he said. “Both parties over 50 years have their fingerprints on policies that were disastrous for a lot of working-class Americans. Mass incarceration is one example.”

I know very little about Oregon politics but am skeptical that its blue collar voters are clamoring to be led by a Ivy-educated NYT columnist whose only connection to them is his inheritance of a cherry orchard that he grew up on. But this may be a propitious time to strike:

The Democratic primary for governor, only the second in more than two decades not to include an incumbent or former governor, is wide open. Yet an outsider may still face an uphill battle.

As an outsider, that hardly sounds like a murderer’s row of opposition. There’s no US Senator, Congressman, or even lieutenant governor in the mix. But they’re likely to be more in touch with the state of Oregon politics than Kristof. 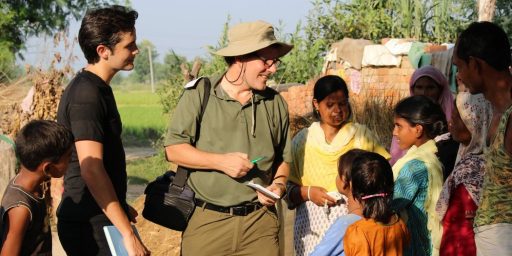