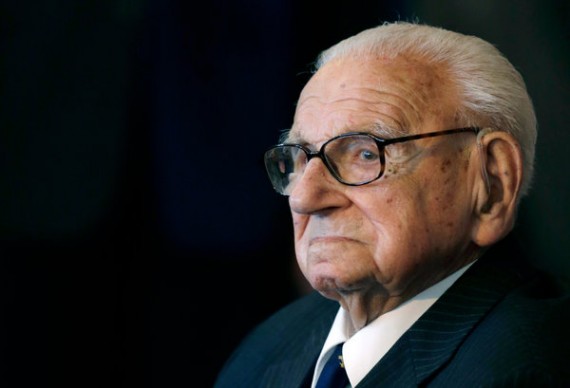 Nicholas Winton, a British man who helped save more than 600 children, most of whom were Jewish, from Czechoslovakia as the world hurtled toward the Second World War, and went largely unknown for much of the rest of his life, has died at the age of 106:

Nicholas Winton, a Briton who said nothing for a half-century about his role in organizing the escape of 669 mostly Jewish children from Czechoslovakia on the eve of World War II, a righteous deed like those of Oskar Schindler and Raoul Wallenberg, died on Wednesday in Maidenhead, England. He was 106.

The Rotary Club of Maidenhead, of which Mr. Winton was a former president, announced his death on its website. He lived in Maidenhead, west of London.

It was only after Mr. Winton’s wife found a scrapbook in the attic of their home at Maidenhead, in 1988 — a dusty record of names, pictures and documents detailing a story of redemption from the Holocaust — that he spoke of his all-but-forgotten work in the deliverance of children who, like the parents who gave them up to save their lives, were destined for Nazi concentration camps and extermination

For all his ensuing honors and accolades in books and films, Mr. Winton was a reluctant hero, often compared to Schindler, the ethnic German who saved 1,200 Jews by employing them in his enamelware and munitions factories in Poland and Czechoslovakia, and to Wallenberg, the Swedish businessman and diplomat who used illegal passports and legation hideaways to save tens of thousands of Jews in Nazi-occupied Hungary.

Mr. Winton — Sir Nicholas in England since 2003, when he was knighted by Queen Elizabeth II — was a London stockbroker in December 1938 when, on an impulse, he canceled a Swiss skiing vacation and flew to Prague at the behest of a friend who was aiding refugees in the Sudetenland, the western region of Czechoslovakia that had just been annexed by Germany.

“Don’t bother to bring your skis,” the friend, Martin Blake, advised in a phone call.

Mr. Winton found vast camps of refugees living in appalling conditions. The pogroms of Kristallnacht, the “Night of Broken Glass,” had recently struck Jewish shops, homes and synagogues in Germany and Austria. War looked inevitable, and escape, especially for children, seemed hopeless, given the restrictions against Jewish immigration in the West.

Britain, however, was an exception. In late 1938, it began a program, called Kindertransport, to admit unaccompanied Jewish children up to age 17 if they had a host family, with the offer of a £50 warranty for an eventual return ticket. The Refugee Children’s Movement in Britain sent representatives to Germany and Austria, and 10,000 Jewish children were saved before the war began.

But there was no comparable mass-rescue effort in Czechoslovakia. Mr. Winton created one. It involved dangers, bribes, forgery, secret contacts with the Gestapo, nine railroad trains, an avalanche of paperwork and a lot of money. Nazi agents started following him. In his Prague hotel room, he met terrified parents desperate to get their children to safety, although it meant surrendering them to strangers in a foreign land.

As their numbers grew, a storefront office was opened. Long lines attracted Gestapo attention. Perilous confrontations were resolved with bribes. Eventually he registered more than 900 children, although he had names and details on 5,000. In early 1939, he left two friends, Trevor Chadwick and Bill Barazetti, in charge in Prague and returned to London to find foster homes, raise money and arrange transportation.He and a few volunteers, including his mother, calling themselves the British Committee for Refugees from Czechoslovakia, Children’s Section, enlisted aid from the Refugee Children’s Movement, had photos of the children printed and appealed for funds and foster homes in newspaper ads and church and synagogue bulletins.

Hundreds of families volunteered to take children, and money trickled in from donors — not enough to cover all the costs, but Mr. Winton made up the difference himself. He also appealed to the Home Office for entry visas, but the response was slow and time was short. “This was a few months before the war broke out,” he recalled. “So we forged the Home Office entry permits.”

In Prague, Mr. Chadwick quietly cultivated the chief of the Gestapo, Karl Boemelberg — they called him “the criminal rat” after his inspector’s rank of kriminalrat — and arranged for forged transit papers and bribes to be passed to key Nazis and Czech railway officials, who threatened to halt trains or seize the children unless they were paid off. Boemelberg proved instrumental, clearing the trains and transit papers, Mr. Chadwick said.

Mr. Winton sent more money, some for bribes and some to cover expenses for children whose parents had been arrested and shot or had fled into hiding, while many of the Czech families sold possessions to pay for their children’s escape. The red tape and paperwork seemed endless.

But on March 14, 1939, it all came together. Hours before Hitler dismembered the Czech provinces of Bohemia and Moravia as a German “Protectorate,” the first 20 children left Prague on a train. Survivors told of searing scenes on the station platform in the final moments before departure as children sobbed and pleaded not to be sent away and parents faced giving up their children.

Mr. Winton and his colleagues later arranged for eight more trains to get the rest of the children out, crossing the Third Reich through Nuremberg and Cologne to the Hook of Holland, then across the North Sea by boat to Harwich, Essex, and on by British rail to the Liverpool Street Station in London. There, he and the host families met the children. Each refugee had a small bag and wore a name tag.

But only seven of the eight trains made it through, the last in early August, bringing the total rescued to 669. About 250 children, the largest group, were on board the last train out, on Sept. 1, 1939. On that day, however, Hitler invaded Poland, all borders controlled by Germany were closed and Mr. Winton’s rescue efforts came to an end.

“Within hours of the announcement, the train disappeared,” he recalled. “None of the 250 children aboard was ever seen again.” All were believed to have perished in concentration camps.

Nearly all the saved children were orphans by war’s end, their parents killed at Auschwitz, Bergen-Belsen or Theresienstadt. After the war, many remained in Britain, but others returned to Czechoslovakia or emigrated to Israel, Australia or the United States. The survivors, many now in their 70s and 80s, still call themselves “Winton’s Children.”

or 50 years he said nothing of the children’s rescue, not even to his wife, Grete Gjelstrup, a Dane he had married in 1948. They had three children, Nicholas, Barbara and Robin. Robin died at age 7 in 1962. Mr. Winton’s wife died in 1999. The Rotary Club of Maidenhead said his daughter, Barbara, and two grandchildren were at his side at his death, but complete information on his survivors was not immediately available.

After finding his long-hidden scrapbook — crammed with names, pictures, letters from families, travel documents and notes crediting his colleagues — his wife asked for an explanation. He gave her a general idea, but said he thought the papers had no value and suggested discarding them.

“You can’t throw those papers away,” she responded. “They are children’s lives.”

“I did not think for one moment that they would be of interest to anyone so long after it happened,” Mr. Winton recalled later.

But he reluctantly agreed to let her explore the matter. She gave the scrapbook to a Holocaust historian. A newspaper article followed. Then a BBC television program featured the story of his rescues, and the publicity went worldwide.

He was showered with encomiums: the Czech Republic’s highest award, honorary citizenship of Prague, an American Congressional resolution, letters of appreciation from President George W. Bush, Prime Minister Tony Blair of Britain, former President Ezer Weizman of Israel and people around the world, and a nomination by the Czech Republic for the Nobel Peace Prize. His scrapbook went to Yad Vashem, the Holocaust memorial in Israel. Streets and schools were named for him. Statues went up in Prague and London.

Why did he do it?

He never really explained, though he offered a bare rationale in an interview with The New York Times in 2001: “One saw the problem there, that a lot of these children were in danger, and you had to get them to what was called a safe haven, and there was no organization to do that. Why did I do it? Why do people do different things. Some people revel in taking risks, and some go through life taking no risks at all.”

Winton was the subject of a 60 Minutes piece several years ago, which was the first time that I can recall ever hearing his remarkable story, that is worth watching:

And this is a clip from a British program about him that aired in 1988, which would have aired not very long after his wife first learned of what he did in 1938 and 1939:

There’s really not much more you can say, is there?