At a time when our alliance is more important than ever, President Trump is responding by attacking our ally. 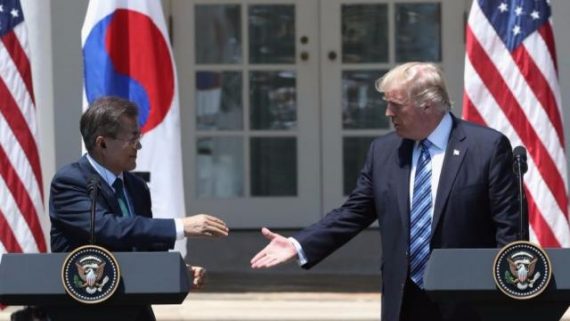 In the wake of yesterday’s nuclear test by North Korea, President Trump chose for some reason to attack South Korea via Twitter:

WASHINGTON — While the world agonized over the huge nuclear test in North Korea this weekend, President Trump aimed his most pointed rhetorical fire not at the renegade regime in Pyongyang, but at America’s closest partner in confronting the crisis: South Korea.

In taking to Twitter to accuse Seoul of “appeasement,” Mr. Trump was venting his frustration at a new liberal South Korean government he sees as both soft on North Korea’s atomic program and resistant to his demand for an overhaul of trade practices that he views as cheating American workers and companies.

For Mr. Trump, the crisis lays bare how his trade agenda — the bedrock of his economic populist campaign in 2016 — is increasingly at odds with the security agenda he has pursued as president. It is largely a problem of Mr. Trump’s own making. Unlike several of his predecessors, who were able to press countries on trade issues while cooperating with them on security, Mr. Trump has explicitly linked the two, painting himself into a corner.

The president, known for fighting his political wars simultaneously on multiple fronts, seems intent on taking on all comers in Asia. The president on Sunday took a somewhat milder jab at another country he sees as an adversary on trade, China, saying the North was an “embarrassment” to Beijing, its primary economic patron.

The president took a harder line later in the day, saying he was considering the drastic step of “stopping all trade with any country doing business with North Korea,” but he did not single out China by name.

Thus, what was supposed to be a calm holiday weekend dissolved into jitters over a dual threat: the specter of nuclear war on the Korean Peninsula, and the possibility of an economic standoff among world powers, as Mr. Trump considers walking away from a major trade agreement with South Korea as early as this week.

Administration officials said Mr. Trump’s attack-on-all-fronts approach was necessary to keep the pressure on adversaries and allies alike. But outside observers saw a danger in Mr. Trump’s efforts to fulfill a core populist campaign promise on trade even as he tried to use the issue as leverage on security matters.

“In a circumstance where we’re going to need close cooperation with not only South Korea but China as well, he’s coming out swinging at all of them rather than trying to build support and coordination,” said Ely Ratner, a top national security official in the Obama administration. “It just looks so haphazard.”

South Korean officials, in a shift from the previous conservative government, have called for increased negotiations with the North as a way of defusing the escalating tensions on the tinderbox Korean Peninsula. Mr. Trump warned last week that “talking is not the answer.”

President Moon Jae-in of South Korea and Mr. Trump last spoke on Friday to discuss the trade situation, but have not talked since the atomic test, said an administration official with knowledge of the call.

“Moon has actually been very supportive of the U.S. approach of maximum pressure and engagement,” Mr. Einhorn said. “Nothing he’s done so far smacks of appeasement.”

Trump’s attacks on South Korea actually preceded the nuclear test, and began on Saturday, when it was reported that he was considering withdrawing from the Free Trade Agreement that the United States entered into with South Korea, which was negotiated and ratified during the final years of the Bush Administration some ten years ago. All of this has left one of America’s oldest allies just a bit confused and concerned:

TOKYO — South Korea’s president tried late Sunday to dismiss talk of a dispute between Seoul and Washington over how to deal with North Korea following its sixth nuclear test, after President Trump criticized the South Korean approach as “appeasement.”

Moon Jae-in’s office said that his government would continue to work towards peaceful denuclearization after tweets and actions from Trump that have left South Koreans scratching their heads at why the American president is attacking an ally at such a sensitive time.

As if to underline Seoul’s willingness to be tough, the South Korean military conducted bombing drills at dawn Monday, practicing ballistic missile strikes on the North Korean nuclear test site at Punggye-ri.

The South Korean military calculated the distance to the site and practiced having F-15 jet fighters accurately hit the target, the joint chiefs of staff said Monday morning.

“This drill was conducted to send a strong warning to North Korea for its sixth nuclear test,” it said.

After North Korea conducted its nuclear test Sunday, Trump tweeted: “South Korea is finding, as I have told them, that their talk of appeasement with North Korea will not work, they only understand one thing!”

Trump did not talk to Moon on the phone Sunday — in stark contrast to the two calls he had with Shinzo Abe, the prime minister of Japan and a leader who has proven much more willing to agree with his American counterpart. This will worsen anxieties in Seoul that Tokyo is seen as “the favorite ally,” analysts said.

Moon, who was elected in May, advocated engagement with North Korea but has also acknowledged the need for pressure to bring the Pyongyang regime back to talks. He has also come around to an agreement between his predecessor and the U.S. military to deploy an antimissile system in South Korea.

Trump’s tweet was widely reported across South Korean media, and Moon’s office responded to the tweet with a measured statement Sunday night.

“South Korea is a country that experienced a fratricidal war. The destruction of war should not be repeated in this land,” it said. “We will not give up and will continue to push for the denuclearization of the Korean Peninsula through peaceful means working together with our allies.”

Trump’s twitter jab came amid news that the U.S. president has instructed advisers to prepare to withdraw from a free-trade agreement with South Korea — a move that is resolutely opposed by South Korea and one that would undermine the two countries’ economic alliance.

South Korea’s response overall to Trump’s recent pronouncements has been much more muted than its past explosions against its protector — a sign that they know Trump is a different kind of president.

“They think they’re dealing with an unreasonable partner and complaining about it isn’t going to help — in fact, it might make it worse,” said David Straub, a former State Department official who dealt with both Koreas and recently published a book about anti-Americanism in South Korea.

“Opinion polls show South Koreans have one of the lowest rates of regard for Trump in the world and they don’t consider him to be a reasonable person,” Straub said. “In fact, they worry he’s kind of nuts, but they still want the alliance.”

On the Sunday talk shows in the United States, there was plenty of criticism of Trump’s words.

“You gotta watch the tweets,” Michael Hayden, a retired Air Force general and former head of the National Security Agency and the CIA who has been critical of Trump, said on CNN’s “State of the Union.”

“I think we had an unforced error over the weekend when we brought up the free trade agreement with our South Korea friends on whom we have to cooperate. . . . It’s wrong on the merits, and it’s certainly not integrated into a broader approach to northeast Asia,” Hayden said. He served as NSA director from 1999 to 2005 and led the CIA from 2006 until 2009.

In a rational world, of course, we wouldn’t have an American President attacking our ally in Seoul in response to provocative action from Pyongyang. Not only does this type of reaction risk the danger of creating doubt in both South Korea and Japan, as well as other allies within range of Korea’s shorter range weapons such as Australia and New Zealand, about just how reliable the United States would be in response to a true crisis on the Korean Peninsula that could cause Kim Jong Un to lash out against any one of them. Additionally, it sends precisely the wrong signal to both North Korea and China. In the case of North Korea, creating a wedge between Washington and Seoul has been a long standing goal going back to Kim Jong Un’s grandfather, the fact that it hasn’t succeeded in doing so hasn’t been for lack of trying. Now, President Trump appears for all the world to be doing exactly what the North wants at the precisely wrong time.

Rather than attacking our ally in Seoul, this is the time when we need to make it clear that any attack on the south, or Japan or any of the other nations that could be impacted by a nuclear North Korea, would be met with retaliation that, if not contained, could result in a war that would ultimately mean the end of the paradise that the Kim family and its cronies have carved out for themselves in Pyongyang. Instead, Trump is creating doubt about our commitment to these allies so long as he is President. This risks causing both a reassessment of their future ties to the United States in South Korea and elsewhere, but also risks that the North will incorrectly assess how we might respond to more provocative action on their part, and it’s misunderstandings like this that are most likely to lead to the kind of crisis on the peninsula that would lead to precisely the kind of outcome we should want to avoid at all costs. As I’ve said before, though, we have put our foreign policy, and the future of the world, in the hands of a complete amateur so none of this should be surprising.